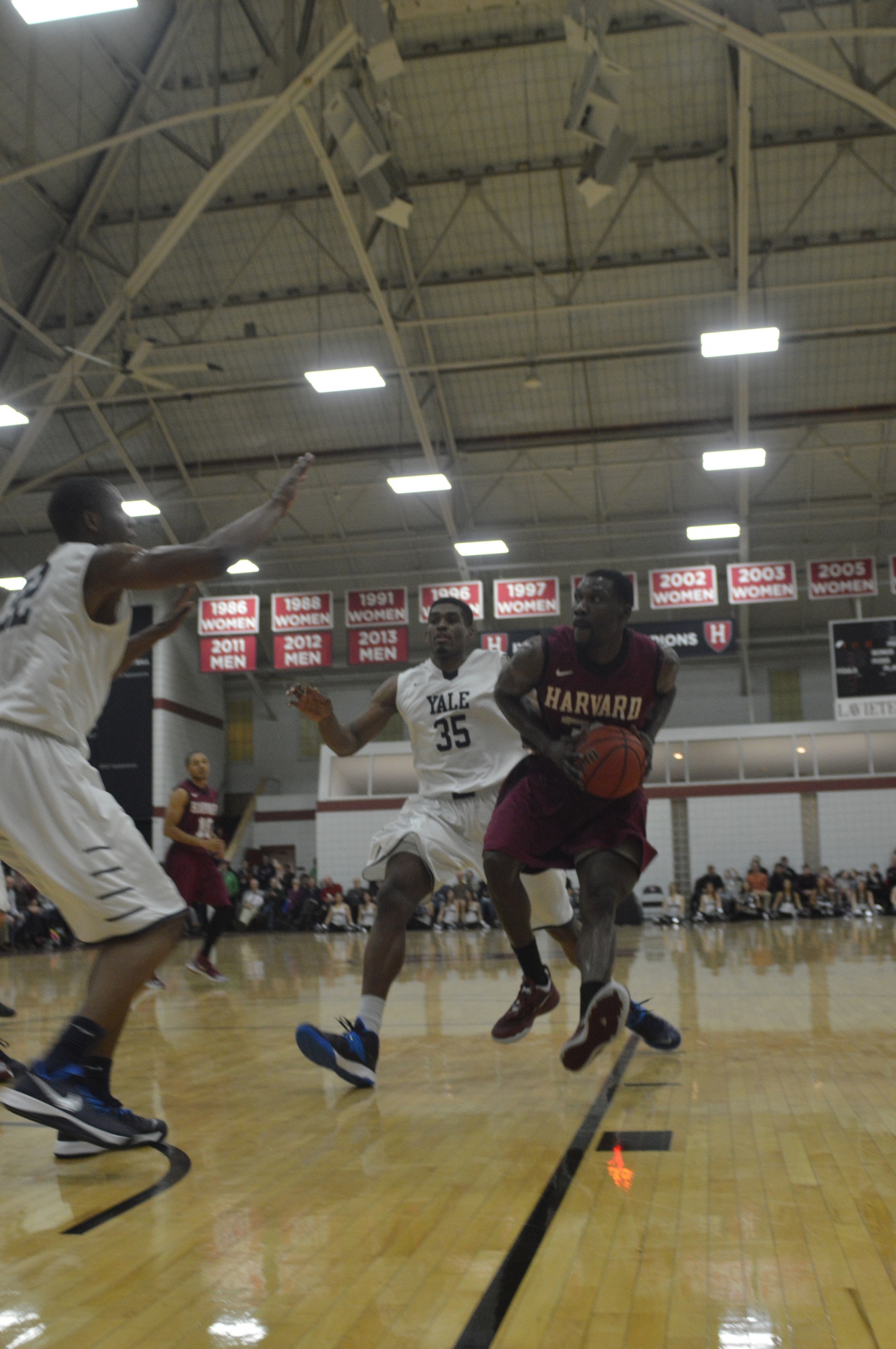 The Yale men's basketball team earned a 74-7 win at Lavietes Pavilion on Feb. 8, handing Harvard its first and only loss of the Ivy League season. Senior forward Kyle Casey's squad would punch its third straight ticket to March Madness with a win in New Haven this Friday.
By Hope Schwartz, Crimson Staff Writer

For the Harvard men’s basketball team, which has already clinched a share of its fourth consecutive Ivy League title, one win is all it will take to secure its third straight NCAA Tournament bid and outright Ancient Eight crown.

The Crimson is hot off a sweep of Cornell and Columbia, which guaranteed Harvard its share of the Ivy title. In its final home stand of the season, the Crimson handed convincing wins to the Big Red and the Lions, despite going to double overtime with Columbia on the Lions’ home turf earlier in February.

“We’re incredibly pleased and proud to be in this position,” Crimson coach Tommy Amaker said. “If you think about our program a number of years ago, and now we’re sitting here looking at four Ivy League championships in a row. We’re pleased about that.”

One win is all Harvard needs, but it won’t come easily against second-place Yale. The Bulldogs provided the Crimson its only conference loss of the season on Feb. 8, the night after Harvard barely eked out a win over the Bears at Lavietes Pavilion.

“We had a lot of turnovers, and we need to cut down on those,” sophomore guard Siyani Chambers said. “We need to just go out there and box out and defend, and if we limit them to as few shots as possible, I think we have a good chance.”

Though the Crimson was able to shut down the Bears’ leading scorer, tri-captain guard Sean McGonagill, a surprise 11-point contribution from freshman guard Tavon Blackmon kept Harvard on its toes. The Crimson suffered a drought on the offensive end of the floor, with only freshman forward Zena Edosomwan finishing in the double digits. The leading scoring duo of Chambers and junior wing Wesley Saunders were all but silenced—combining for 10 points.

The lack of energy from Friday’s game carried over, and the Crimson fell to Yale behind poor shooting and inconsistent defense. Though Saunders was back to form with 16 points, Harvard couldn’t contain sophomore center Justin Sears, who lit up the hosts for 21 points.

“I think what you see in the course of a season, there are going to be ebbs and flows throughout the year,” Amaker said. “Injuries, or not playing well, or you find yourself in a little bit of a slide or a funk…. We knew coming off of that loss that our preparation needed to be better, and I think ever since then, our guys have responded incredibly well with the week of preparation prior to the weekend’s games.”

A win this Friday in the Crimson’s more difficult matchup would secure the NCAA Tournament bid, but both games could influence Harvard’s seeding in the Big Dance. After failing to convert on opportunities to get statement, nonconference wins at Colorado and Connecticut earlier this season, the Crimson needs all the help it can get if it wants a boost on Selection Sunday.

Though Harvard will be playing for the crown on Friday, co-captain Laurent Rivard has his eyes on the road ahead.

“[Friday is] pretty much the championship game,” Rivard said. “Saturday is just the next game on our schedule. We’re going to approach it like any other game, even if we win on Friday. It’s still an important game, especially for seeding purposes.”

In its final weekend of the regular season, Harvard will close out an up-and-down title run. Marked by the return of co-captain Brandyn Curry and senior Kyle Casey after yearlong leaves of absence, the 2013-2014 season has been an opportunity for the Crimson to put the pieces together. Despite injuries that have depleted the squad’s size, Harvard will rely on its still-deep bench to get things going in New Haven and Providence.

Although the same five starters have taken the court for the Crimson in 25 of 28 games, contributions from the likes of Curry and Edosomwan have been make-or-break throughout the season. In its final week of regular season practice, Harvard has focused on taking it one game at a time.

“It’s been a great week of preparation,” Amaker said. “We’ve talked about first things first, so Friday night is first. But it’s two games for the weekend, and our kids have embraced that. We recognize how tough these two games are going to be.”

—Staff writer Hope Schwartz can be reached at hschwartz@college.harvard.edu.