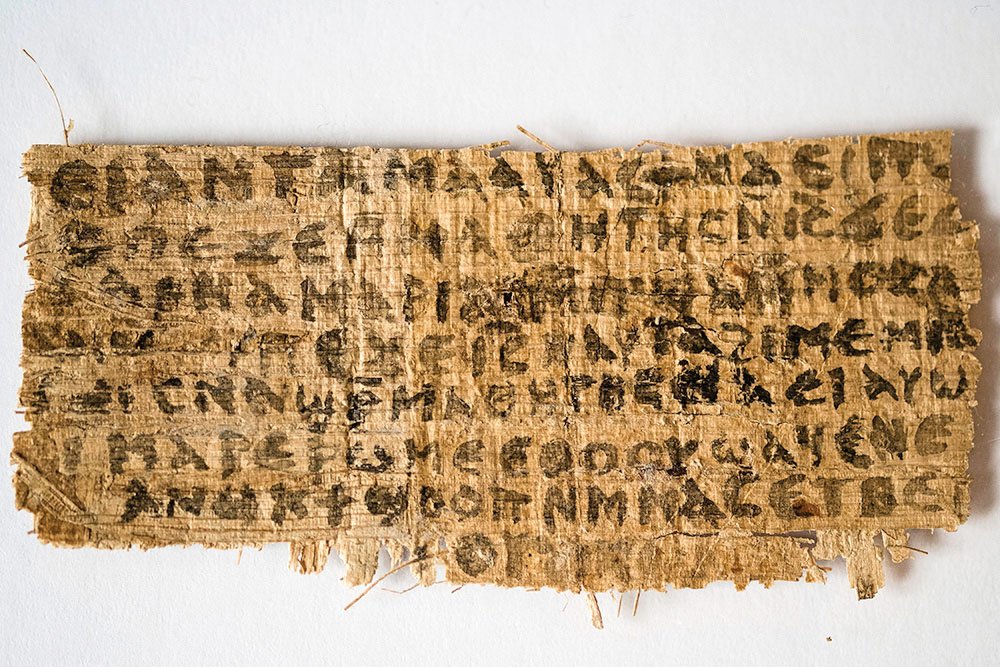 Professors at Harvard University have studied a fragment of papyrus known as the “Gospel of Jesus’s Wife.” Scholars have concluded that the papyrus appears to be ancient, not recently manufactured. By Courtesy of Karen L. King
By Theodore R. Delwiche, Crimson Staff Writer

After nearly 18 months of controversy and accusations of forgery, a fragment of parchment labeled by Divinity School Professor Karen L. King as the “Gospel of Jesus’s Wife” has now been dated to approximately the eighth century, according to an article published on Thursday in the Harvard Theological Review.

The fragment, which is only a few inches in length, contains several words in Coptic, an ancient language of Egyptian Christians, that translate to, “Jesus said to them, my wife.” The next line reads, “She will be able to be my disciple,” according to King’s translation.

King said that she obtained the piece from an anonymous donor in 2011 and originally believed that the fragment was torn from the middle of a larger papyrus dating back the fourth century.  The donor, who, King said, still wishes to remain anonymous, said that he or she does not know the origin of the artifact, but bought the piece along with other papyri many years before contacting King.

When she presented her finding in Rome a year later, King said that many critics, including the Vatican and other academics, claimed the artifact was a forgery. Though the fragment turned out to be nearly 400 years younger than King first predicted, she said that the current dating estimate of the piece at 741 C.E. still places it within the ancient world.

She added that she has never claimed that the piece proves that Jesus had a wife, but rather that it indicates that early Christian thinkers or writers were discussing the role of women in Christianity.

"The main topic of the fragment is to affirm that women who are mothers and wives can be disciples of Jesus—a topic that was hotly debated in early Christianity as celibate virginity increasingly became highly valued," King said in a statement Thursday.

Some scholars still question the authenticity of the piece even after MIT and Columbia University dated the papyrus to be from around the eighth century, and an investigation of the ink by Macquarie University revealed that there are no clear signs of forgery in the handwriting.

Leo Depuydt, an Egyptologist at Brown University, published an article in the Harvard Theological Review alongside King’s piece critiquing her analysis of the piece.

Depuydt pointed to grammatical mistakes in the artifact that he said would not have likely been made by a native writer of Coptic. He also noted similarities between King’s artifact and the writing of the non-canonical Gospel of Thomas, which might indicate that the fragment is part of a copy of the Gospel of Thomas.

King said that she hopes the scientific evidence dating the piece as ancient will dispel all rumors of forgery and allow both students and the public to discuss the broader implications of the piece.

“Certainly whenever it has been brought into the classroom, there has been much discussion,” King said in a conference call. “I am hoping we can turn away from the question of forgery...[to] questions of family, marriage, sexuality, and so forth.”