Students Rally Against Harvard's Management of Timber Plantations in Argentina 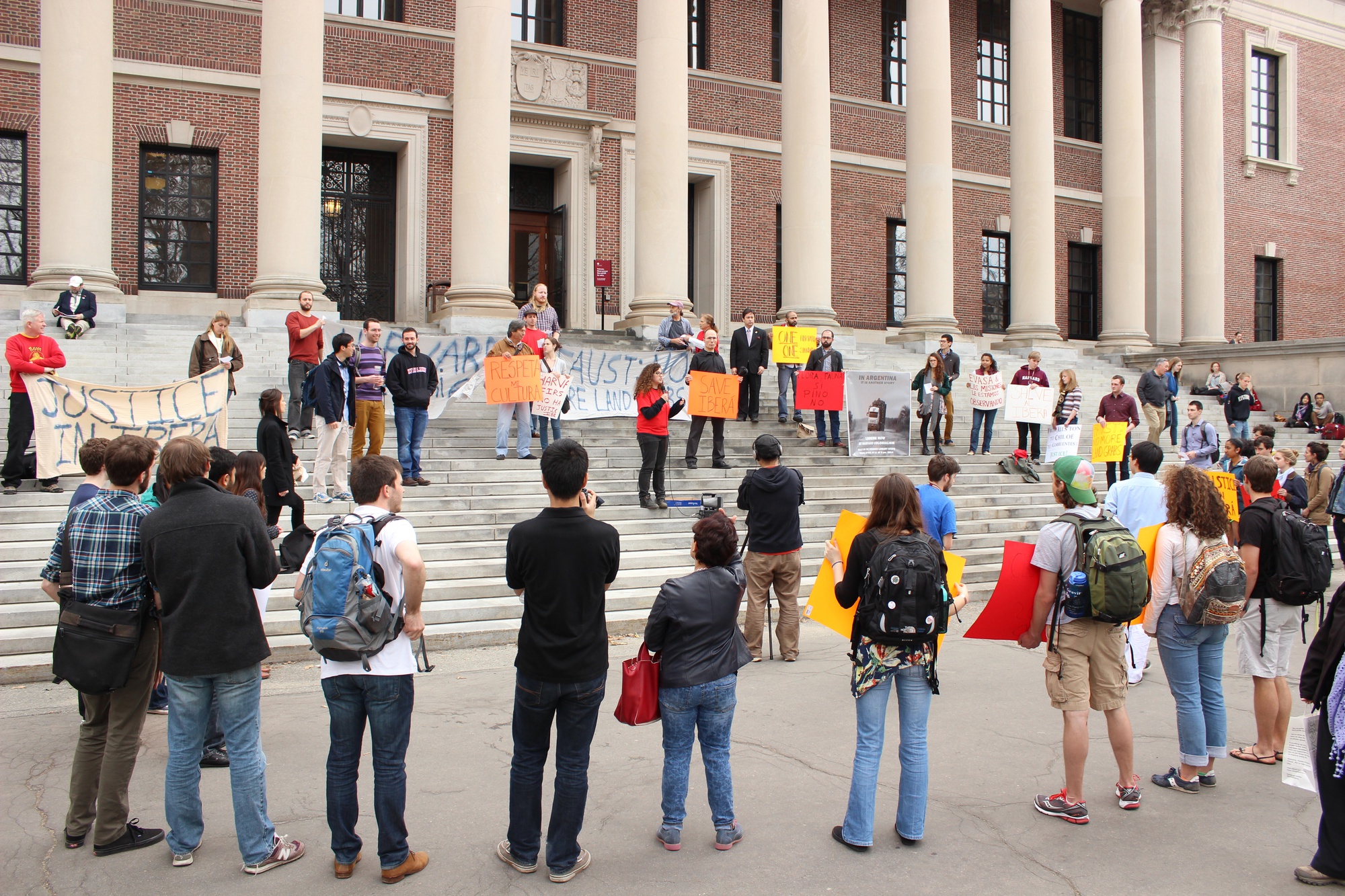 Sandra Korn '14, a leader for the Responsible Investment at Harvard Coalition, speaks to protesters gathered on the steps of Widener Library on Friday afternoon. The rally protested Harvard's management of its timber plantations in northern Argentina and ended in a protest in front of Massachusetts Hall.
By Kristina D. Lorch, Crimson Staff Writer 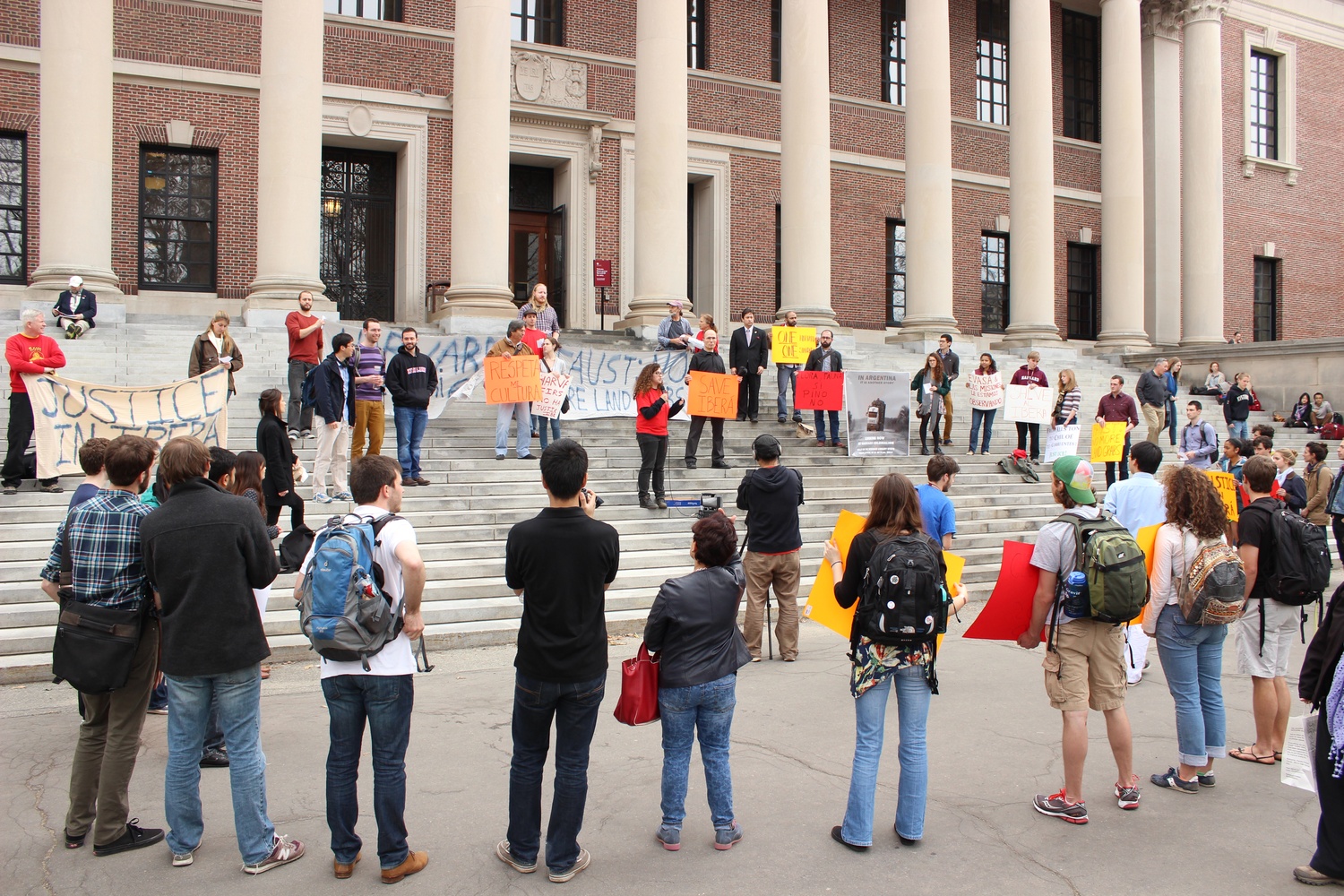 Sandra Korn '14, a leader for the Responsible Investment at Harvard Coalition, speaks to protesters gathered on the steps of Widener Library on Friday afternoon. The rally protested Harvard's management of its timber plantations in northern Argentina and ended in a protest in front of Massachusetts Hall. By Bridget R Irvine

The Responsible Investment at Harvard Coalition held a rally Friday afternoon on the steps of Widener Library and Massachusetts Hall to protest the University’s management of timber plantations it owns in Argentina. The rally comes after much debate over the plantations, including allegations of mismanagement in the fall and the announcement of the independent recertification of the plantations last week.

Throughout the afternoon, students and community members chanted, marched, and held signs, which read “Harvard be transparent,” “Faust: no more land grabs,” and “We’re yelling timber, you better move.”

After several members of the Harvard community, including the Undergraduate Council President and a Harvard alumnus working on the City Council, spoke to the protesters gathered in front of Widener, the group marched to Massachusetts Hall, which houses the University’s central administration and President Drew G. Faust’s office. A delegation from the group entered Massachusetts Hall with a petition containing 1,150 signatures, formally asking Faust to change the University’s management of its plantations.

The protests were a part of Responsible Investment at Harvard Coalition’s week-long SHAME Tour, which seeks to “stop Harvard’s Argentine mismanagement and exploitation,” according to the organization’s website. As part of the demonstration, the coalition flew two leaders from local communities in Argentina, Adrian Obregon and Emilio Spataro, 4,884 miles to Harvard’s campus.

Responsible Investment at Harvard is a coalition of students, alumni, faculty, and community members dedicated to changing the way the University manages its investments, according to its website. Members of the coalition argue that Harvard’s unjust practices on the Argentine plantations include devastating local farmers, harming workers, and destroying wetlands.

According to Responsible Investment at Harvard member Gabriel H. Bayard ’15, the coalition’s three basic demands are that “all new planting [has] to stop until an environmental impact study has been done in a participatory manner, all planting [must] be stopped within two kilometers of populated areas, and the Harvard Management Company [must] oblige by all legally required labor practices.”

Harvard Management Company has denied those accusations in past memos and statements. And in an April 16 op-ed, HMC’s head of alternative assets, Andrew D. Wiltshire, wrote that claims made by Responsible Investment about the plantations “show a clear pattern of deliberate misrepresentation.” Wiltshire specifically contested claims that the Harvard-owned companies harm workers, the wetlands, or, in any significant way, the environment. He also reiterated that HMC is working with locals to implement recommendations that the Forest Stewardship Council certification process requires.

UC president Gus A. Mayopoulos ’15 spoke at the rally, voicing his support for the coalition’s efforts. The UC will be hosting a forum on responsible investment with Obregon and Spataro on Tuesday.

“It is unfortunate, it's sad, and it's embarrassing that Harvard is choosing to fund these efforts by damaging a community," Mayopoulos said.

"I'm proud to be a Harvard grad, but there's so much that is making me ashamed," Cheung said, citing both the campaign for divestment and the recent unionization movement of DoubleTree hotel employees.

"It's not enough to try to educate students to go out and change the world when Harvard is going out and damaging the world," he added.

In addition to the protest, Responsible Investment at Harvard has already hosted several events, including one in New York and an event with the Harvard Kennedy School Progressive Caucus.