Ellison To Depart Harvard for Chicago This Summer 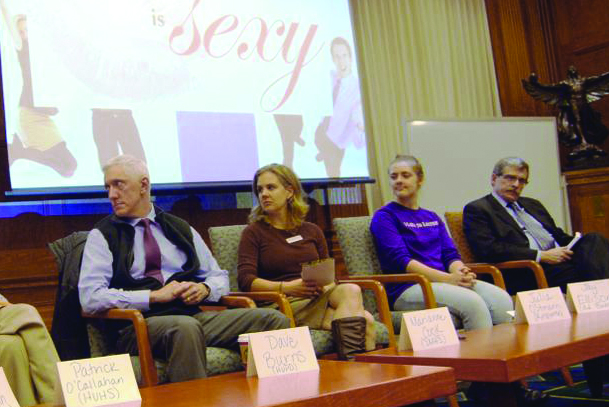 John “Jay” L. Ellison, shown above far right in an earlier event, announced that he will leave his post as secretary of the Administrative Board at the end of the year and will be headed to the University of Chicago.
By Madeline R. Conway and Steven S. Lee, Crimson Staff Writers

Administrative Board Secretary John “Jay” L. Ellison, the administrator who helped oversee the adjudication of last year’s Government 1310 cheating scandal and implemented reforms to the Ad Board’s structure, will leave Harvard this summer to become the dean of students in the college at the University of Chicago.

Ellison has been a member of the Ad Board, the College’s primary disciplinary body, for almost 12 years, and was named its secretary in 2005. He first joined the board in 2002 as Lowell House’s senior tutor, the equivalent of today’s resident dean position. Interim Dean of the College Donald H. Pfister announced Ellison’s departure in an email to colleagues Wednesday morning.

“It’s bittersweet,” Ellison said of his upcoming departure in an interview Wednesday. “But I’m really excited about going to the University of Chicago. I think they’re going to give me some really great opportunities to work with students there and do it in a different way.”

According to Ellison, he will be overseeing undergraduate advising in his upcoming role at the University of Chicago. Ellison, who holds a Ph.D. in Near Eastern Languages and Civilizations, added that though he likely will not be teaching, as he has at Harvard, he will have the opportunity to engage in academic research.

In his time on the Ad Board, Ellison has served on a number of administrative committees, among them the University-wide working group that was charged with evaluating Harvard’s sexual assault policies, convened last spring.

Ellison also sat on the Committee to Review the Ad Board, the group led by Pfister that released a report in 2009 recommending several changes to board policy. Several of the group’s recommendations, such as changes to the resident dean position and the use of hearing subcommittees within the Ad Board, have since become policy under Ellison.

Ellison’s departure comes at a point that could be a period of significant transition for the College’s disciplinary system. The Academic Integrity Committee has proposed the adoption of the College’s first honor code, and faculty are expected to vote on the measure at their upcoming May meeting.

If approved, the policy would establish a student-faculty honor board to hear cases of academic dishonesty, likely removing cheating cases from the Ad Board’s jurisdiction. In addition, the Academic Integrity Committee has agreed to recommend a review of the Ad Board’s disciplinary sanctions.

In an interview Wednesday, Pfister said that administrators have not yet found a successor for Ellison. His departure could be an opportunity to assess the organization of the Ad Board in the context of other possible changes to the body, notably the potential approval of the proposed honor board, Pfister said.

“Whenever there are these kinds of shifts, it’s often a chance to look at the system, look at what we have and see if there is a different way, alternative ways to organize it,” said Pfister, who chairs the Ad Board in his capacity as interim dean.

Pfister, who is also leaving his position this summer, added that he “can’t imagine that there won’t be a secretary” after Ellison’s departure.

Ellison led the Ad Board through the adjudication of Harvard’s largest cheating scandal in recent memory. In 2012, the Ad Board investigated roughly 125 students accused of plagiarizing or inappropriately collaborating on Gov 1310’s final take-home exam, requiring about 70 to temporarily withdraw from the College.

During the Ad Board’s investigation, the contents of an internal email sent by Ellison advising his colleagues about counseling athletes and other students involved in the scandal appeared in the press, prompting administrators to secretly search the email accounts of resident deans to determine the source of the leak. Ellison’s account was also searched at his request.

The news of Ellison’s upcoming departure comes just two days after the announcement that another member of the Ad Board will leave the College at the end of the academic year. This summer, Adams House resident dean Sharon L. Howell will begin work as the associate head of school at Northfield Mount Hermon School in Gill, Mass.

After Pfister’s departure and the appointment of Ellison’s successor, the Ad Board’s two highest positions will be filled by newcomers to the roles.