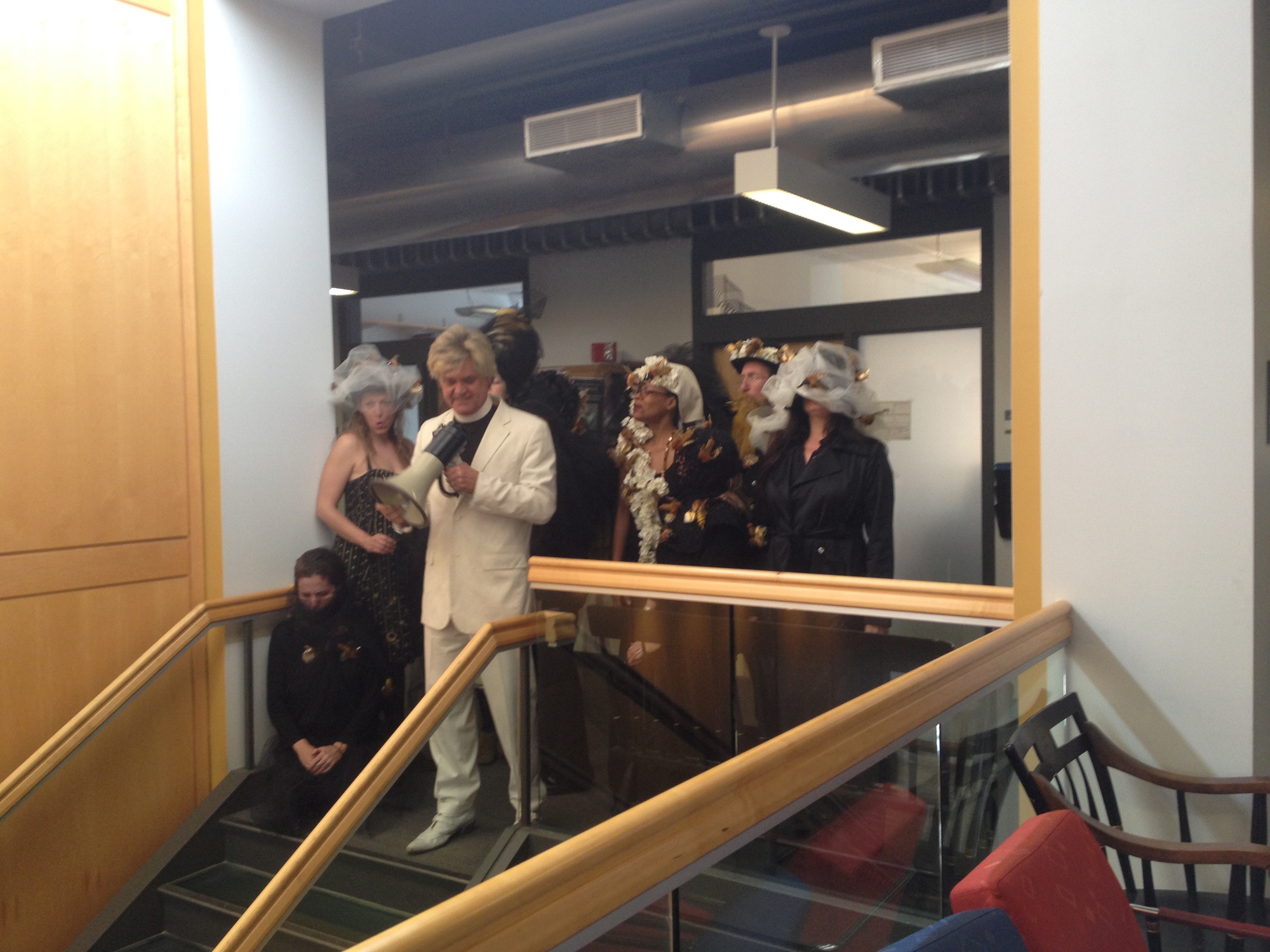 Members of the “Church of Stop Shopping in NYC” led a protest against the project Robobees, which aimed to design robotic bees. Protestors felt the project was a “non-response” to the current decline in bee populations.
By John P. Finnegan, Crimson Staff Writer

The usual afternoon calm of Maxwell Dworkin was temporarily disrupted Tuesday by a chorus of “HoneyBeeLujahs,” as members of the activist group known as the Church of Stop Shopping descended upon the third floor of the building to protest a scientific research project focused on creating and studying insect-like robots.

Activist Bill Talen, also known by his stage name “Reverend Billy,” led his singing troupe of about ten people to protest the research endeavor, which he called a “death-y project.” The protest began at about 2:45 p.m. and continued for 20 minutes. According to its website, the Church is a “radical performance community” based in New York City which performs—often in the style of a religious revival meeting—in a variety of public spaces, clubs, and concert halls.

The research project, known as “RoboBees,” is led by engineering professor Robert J. Wood and involves researchers from the School of Engineering and Applied Sciences. In creating tiny flying robots, the researchers aim to better understand, among other topics, flight mechanisms, internal sensors related to flight, and the accomplishment of colony-level collaboration, according to the RoboBees website. The project celebrated its first controlled flight in August 2012, and is supported by funding from the National Science Foundation.

Dressed in all white and surrounded by a choir of his followers in bee and flower costumes, Reverend Billy spoke in solidarity with the honeybee via a megaphone, asking his followers to “give me a Honeybeelujah” in praise of the creature and blasting RoboBees researchers for conducting “science that assumes the honeybee will be extinct.”

In a flyer distributed by the protesters, the Church—temporarily renamed the “Church of the Honeybeelujah” for the protest—alleged that that funding was tainted by influence from Monsanto, a biotechnology corporation. The flyer places the blame for the current honeybee population decline on pesticides developed by the corporation and claims that the federal government had been “Monsanto-ized” into supporting the development of the RoboBee as a “non-response” to the issue.

William Z. Chen ’14, who observed the protest from its start, said that he “tuned out [the protesters’] actual message” and thought it was “very amusing.” He said that he first learned of the protest while studying in the building and initially tried to ignore the noise because he believed it was a “really annoying choir-a-gram.”

Standing in front of what Chen described as a group of 15 to 30 people, Reverend Billy called on the researchers to “stop it, and stop the people around you” and asked those gathered to “shout out, I love the honeybee for what it is.”

The group’s flyer, which lambasts “the vision of Robobees” as “Blade Runner crossed with Hell,” also includes the location of the choir’s next “family friendly and affordable” show in New York City’s Greenwich Village.

—Staff Writer Brian C. Zhang contributed to the reporting of this story.