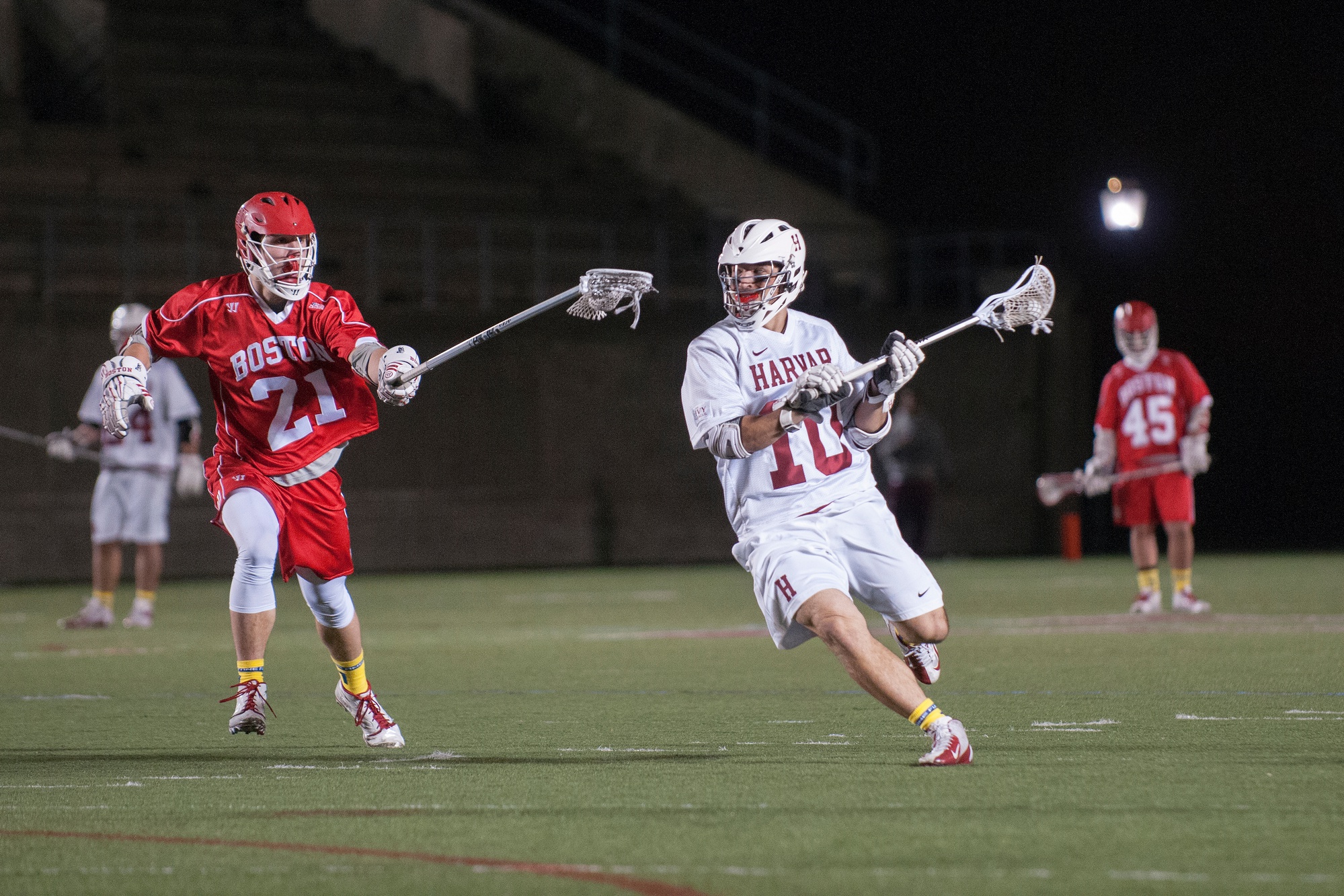 It may not have been pretty, but the Harvard men’s lacrosse team earned its second consecutive win on Tuesday night. The Crimson (7-4, 3-0 Ivy), which has yet to drop a home game this season, faced the new Boston University program (1-10, 1-5 Patriot) at Harvard Stadium, defeating the Terriers 14-9. The two Beantown area teams sported One Fund socks in honor of the victims of last year’s Boston Marathon bombings.

The Harvard squad dropped the first goal of the game as the Terriers scrapped their way past the Crimson defensemen and to the net early in the opening quarter.

“We came out sloppy and not all there offensively early,” Harvard coach Chris Wocjik ’96 said. “We just didn’t do the thing that we’ve been doing consistently over the past few weeks.”

The Terriers were unable to hold onto the lead for long, as co-captain Peter Schwartz caught a smooth pass from sophomore Sean Mahon, and propelled the ball past BU’s second-string rookie goalie, Tyler Zickel. The Crimson did not trail the Terriers again in the night, though Zickel was able to tally nine saves in his debut collegiate game.

“Our ball movement wasn’t where it has been this season,” Wocjik said. “[We were] being selfish.”

A record high eight of Harvard’s 14 goals were unassisted on the night. Schwartz ended the match with five points and led the team with two assists. Though nine Crimson players found the back of the net, leading sophomore point holders Will Walker and Deke Burns had relatively quiet games.

Walker, who has scored 29 goals coming into the night’s competition, notched three goals in the first half but was silenced by the Terriers in the second section of play. Meanwhile Burns, who entered the match with 11 goals and five assists on the season, found the back of the net once and doled out one assist.

“All of our guys played well at times,” Wocjik said. “I wouldn’t really say one guy stood out over the rest. But I think every guy we had made good plays, but I just don’t think it was all there for 60 minutes.”

The game was defined by penalties and turnovers. BU, which averaged 19 turnovers a game prior to facing up against Harvard, totaled 26 botched opportunities, while the Crimson coughed the ball up 17 times.

“We definitely didn’t play our best game,” co-captain Joe Petrucci said. “We were in the box the whole game. It’s tough to get a rhythm on offense when you’re getting so many penalties.”

“We didn’t change our game plan at all,” Petrucci said. “That’s just the way we play. We are aggressive; we’re scrappy of the ground. We battle on ground balls, and we take pride in working harder than the other team. We didn’t do anything differently. But we were man down a lot, but you can’t really blame it on the refs, it’s the way they were calling the game and we should’ve adapted to that.”

The Terriers were able to capitalize on their man-up opportunities four times, keeping BU in the game until the final whistle. The visitors received just three penalties, giving the Crimson two advantage points.

Though the match was not Harvard’s best, especially coming off last Saturday’s victory against formerly-undefeated Cornell, the Crimson success marks the team’s fourth win at home, keeping the squad undefeated in Cambridge.

“This year we haven’t had that many home games,” Schwartz said. “So it makes each win a little more special, especially for us as a senior class because we know that our games here are limited. But playing here at night is really special, and we love playing in front of the home crowd.”

Tuesday’s game was the first time Harvard squared off against the Terriers as a varsity team. The last meeting between the two squads—then competing as club programs—was in 1934.