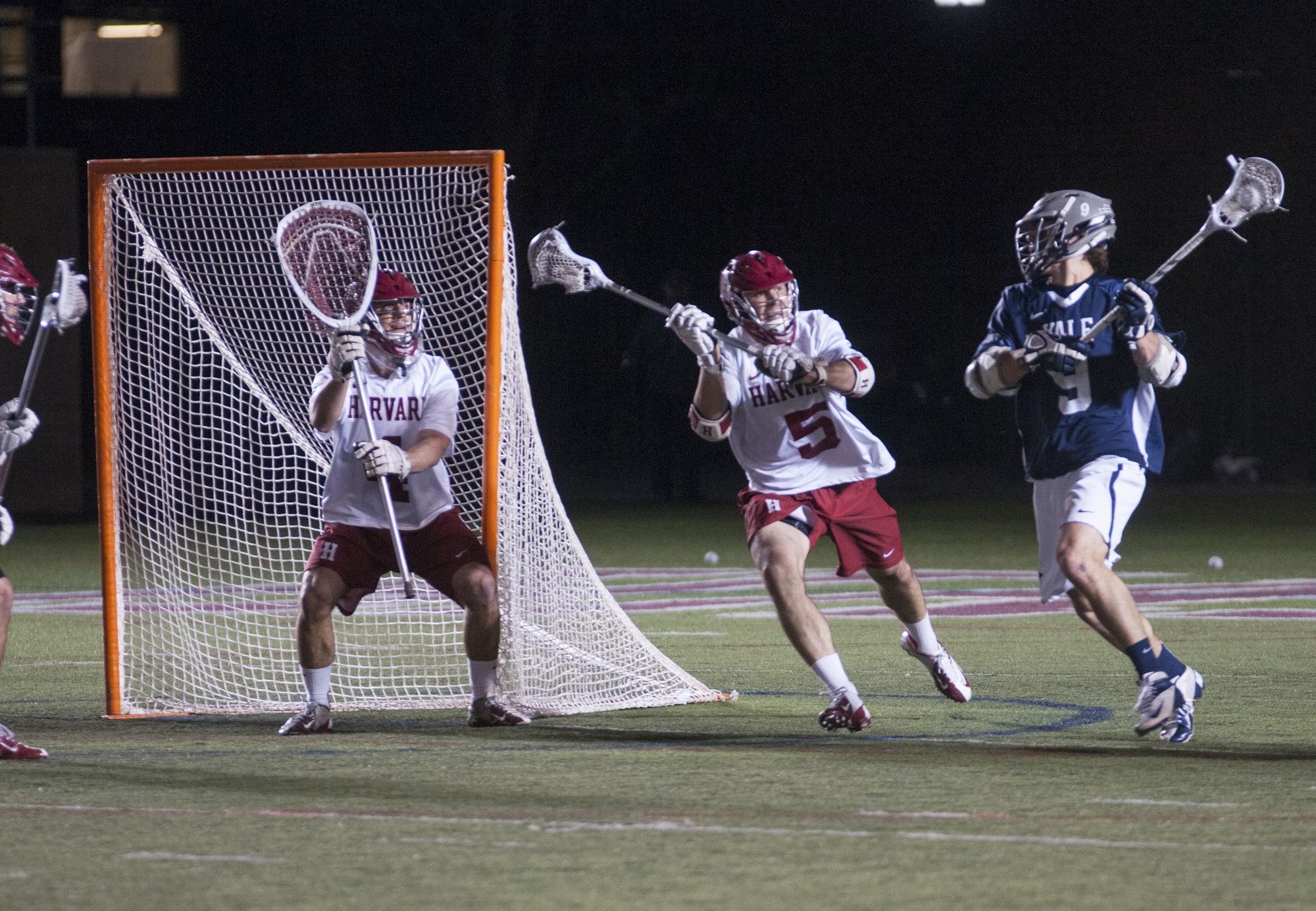 The Harvard men’s lacrosse team ended its season in South Bend, Ind. on Saturday in a hard-fought contest decided by momentum. Despite battling, the Crimson could not recover after Notre Dame jumped out to an early lead.

“It was a disappointing outcome,” Harvard coach Chris Wojcik ’96 said. “Notre Dame started out the game strong. They were pressuring early and forced a couple of turnovers on the clear…. We couldn’t really settle down in the first quarter.”

The Irish came out quickly, beginning the first period with a three-goal run, and continuing into the second period of play with another four unanswered points.

“Notre Dame started out the game…[by] really putting the pressure on,” co-captain defenseman Joe Petrucci said. “They forced a number of turnovers early, but our shooting really wasn’t great. That was a major factor in the game.”

Harvard was unable to find the back of the net until almost 24 minutes of play had elapsed.

“They were up early, 7-0, and that is a very tough [position] to get yourself out of,” Petrucci said. “But we battled back in the second half. We we cut that lead that they had in the third quarter, but it was too little, too late.”

Sophomore Will Walker scored the first goal of the afternoon for the Crimson, and just a few minutes later Walker passed to the ready stick of classmate Devin Dwyer, who got another mark on the scoreboard for the Crimson.

Harvard continued its scoring push with two more shots past the stick of Notre Dame goalie Conor Kelly, cutting the deficit to 7-4.

“We are a very resilient group of guys,” co-captain midfielder Peter Schwartz said. “And we have been down before this year, so we never thought we were out of it until [Notre Dame] gained the momentum back in its final scoring drive.”

Unfortunately for the Crimson, the Irish defense ultimately crushed the Harvard attack. The Crimson tallied only one more point on the afternoon, while Notre Dame countered with another six goals before the final whistle blew.

“I think that a real challenge for us was our shooting today,” Wojcik said. “I don’t really think we were finishing our shots.”

The Harvard offense outshot its opponent, 35-33, but only 22 of those shots were placed between the posts. The Crimson, which had averaged 10.7 goals per game this season, has struggled this week to put the ball past opposing goalies. The attackers tallied just five goals against Penn in the Ivy League Tournament final last Sunday.

“We just have been shooting poorly overall,” Schwartz said. “But at the same time, I think we made [the Notre Dame goalie] look pretty good.”

Kelly lunged for 17 saves and never let Notre Dame’s lead drop to fewer than three points, while Crimson goalie Jake Gambitsky had a season-low five blocks on the afternoon.

“Notre Dame was generating some really high quality shots,” Wojcik said. “You can’t ask your goalie to make saves when Notre Dame is shooting from that close. I think our entire defense wasn’t allowing Jake to see the shots that we wanted him to see.”

Notre Dame player John Scioscia added four more goals to his 21 on the season, thanks in large part to accurate passes from All-American teammate Matt Kavanaugh.

“We got outplayed every phase of the game,” Petrucci said. “They were tougher than we were on the ground, and that was a big factor of the game. But overall, Notre Dame was the better team today.”

The loss marks the end of the Crimson’s 2014 season. Despite the defeat, the Harvard men’s lacrosse program still has much to celebrate and to look forward to in the 2015 campaign, according to Wojcik.

“One game doesn’t define the season,” Wojcik said. “I am really proud of what the players did this year. We won the Ivy League for the first time in 24 years and we advanced to the [NCAA] Tournament. I am very proud of the team and what they accomplished.”