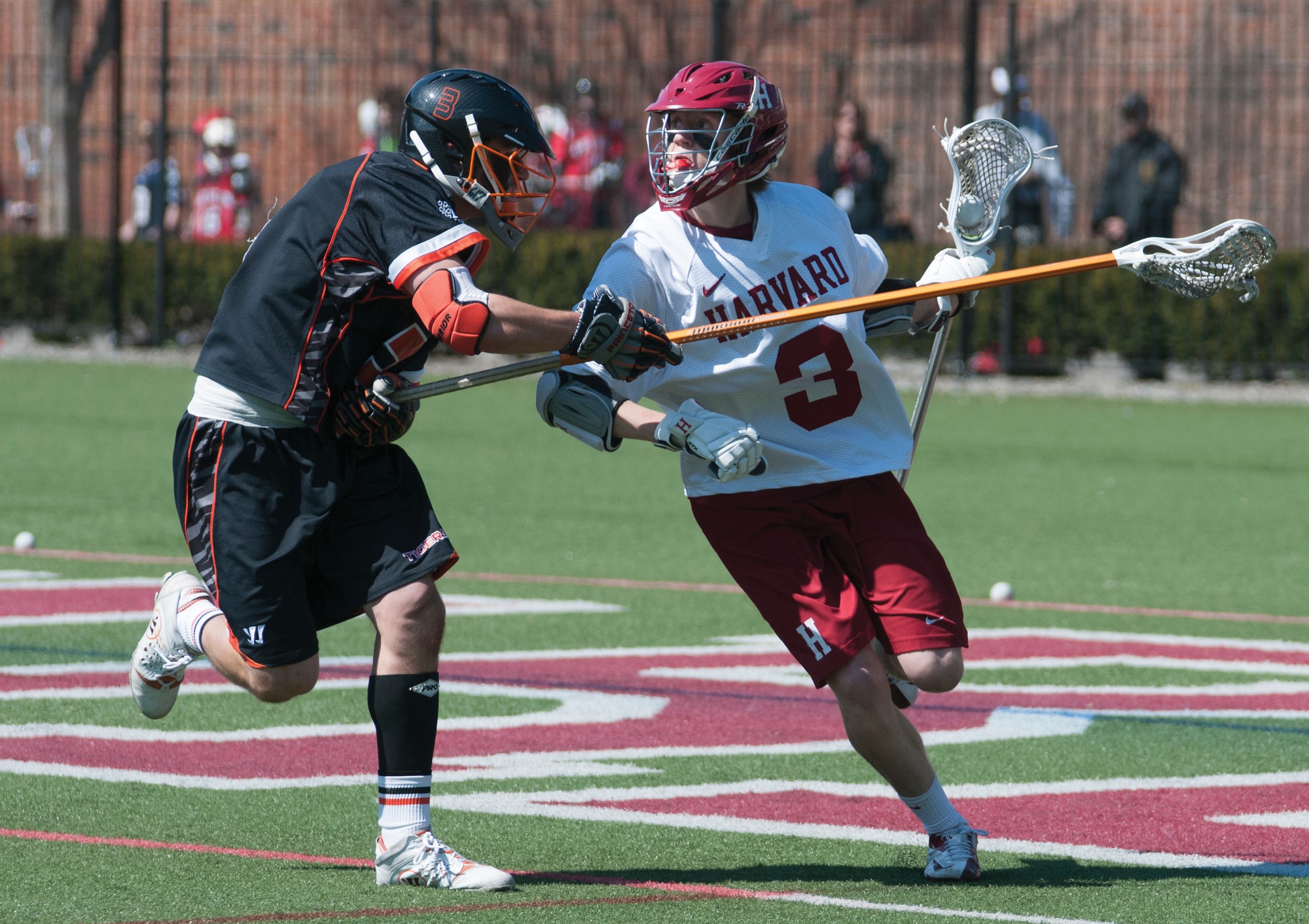 Sophomore Devin Dwyer, shown above in previous action, was key in the Crimson’s victory over Quinnipiac on Tuesday afternoon. Harvard’s leading scorer contributed a fourth-quarter score, plus five assists. Dwyer has 14 points in three games this season.
By Phil Delamater and Julio Fierro, Crimson Staff Writers

There was little surprise in the 2012 edition of the longest-running high school lacrosse rivalry. Top-ranked Garden City easily defeated Manhasset in the 122nd matchup between Long Island’s most storied programs.

“It was easy to see that Bob was something special when he used to cover me in high school,” Dwyer said. “It was tough to put up points against him.”

Just months later, Duvnjak and Dwyer would meet on the field again, alongside several other Garden City players. This time, however, they would be on the same side, looking to add to the even older tradition of Harvard lacrosse. Nine of the 22 players who started a game for the Crimson this season hail from Long Island.

Along with Baltimore and upstate New York, Long Island has long been synonymous with outstanding youth and high school lacrosse.

“I started playing lacrosse when I was four years old,” Jahelka said. “My dad had a stick in my hand. That might be a baseball mitt for some kids in the Midwest, [and] that might be a football for a kid from Texas.... On Long Island...there’s always a heightened focus on lacrosse.”

“It really just starts with the dads that really put this stuff together,” Dwyer said. “They organize teams and…the towns with the best youth programs usually show that they have the best high school teams in the country. It’s really all to those guys for teaching kids at such a young age and getting them involved in the sport, building a love for the sport.”

Dwyer’s father exemplified the community dedication to the sport, serving as an assistant coach to Garden City’s team for over 20 years. He left the team before Dwyer and his brothers arrived, but helped launch his sons’ careers on the field.

“[My father is] the reason I probably play lacrosse at this level,” Dwyer said. “He really got me involved at a young age and showed me what it would take to be a good player.”

While Long Island as a whole has been a prolific source of talent for the Crimson, Garden City in particular stands out. The public school has captured six New York State championships, and the Trojans will look to claim their third consecutive title later this year.

“People certainly move to that town simply because they want their children to play lacrosse for Garden City,” Wojcik said.

On the field, Jahelka and Fischer also starred for the Long Island powerhouse before arriving in Cambridge.

“They have a tradition of excellence and a high standard [that] they hold their players to,” Wojcik said. “They combine the excellent feeder system, [and] you have an outstanding high school program...that consistently churns out outstanding college players.”

Having multiple players from a single high school has provided a huge chemistry boost for Harvard, as Dwyer, Fischer and Jahelka were on the same team at Garden City for three years and started playing together long before that.

“When we first got [to Harvard], it was a familiar face in a really uncertain time of freshman year, kind of getting settled in and everything, and then obviously when you’re on the field,” Jahelka said. “I know what they’re going to do second nature now because I’ve seen them do it so many times in the past, and I’m sure they could say the same thing. So just playing with each other, there’s just obviously a really natural connection.”

The connection between Garden City’s lacrosse program and the Crimson extends to the coaching staff as well. The head coaching position is endowed by former Garden City and Harvard lacrosse player Rick Frisbie ’71, who appears to have originated the relationship. Frisbie was named MVP of the ’67 Trojans and captained the Crimson during his season year. His endowment, the Frisbie Family Endowed Coach for Men’s Lacrosse, supports the head coaching position while also providing a source of funding for the team’s annual operations.

Harvard also represented an opportunity for old rivals to reconnect—prior to facing each other in high school, Dwyer and Duvnjak had played together on the same club team in seventh grade. Through the many years of playing with and against each other in Long Island, the two developed a friendship and mutual respect for each other’s game.

When the two committed to Harvard, they ensured that Long Island talent would be anchoring the team for the next four years.

“I remember talking to him whether it was via text or whatever, and we were just really excited about bringing together a great team with some great recruits coming in,” Dwyer said. “We were ready to set the foundation for Harvard lacrosse and its future, and really do great things for the program.”

—Staff writer Phil Delamater can be reached at phillipdelamater@college.harvard.edu.