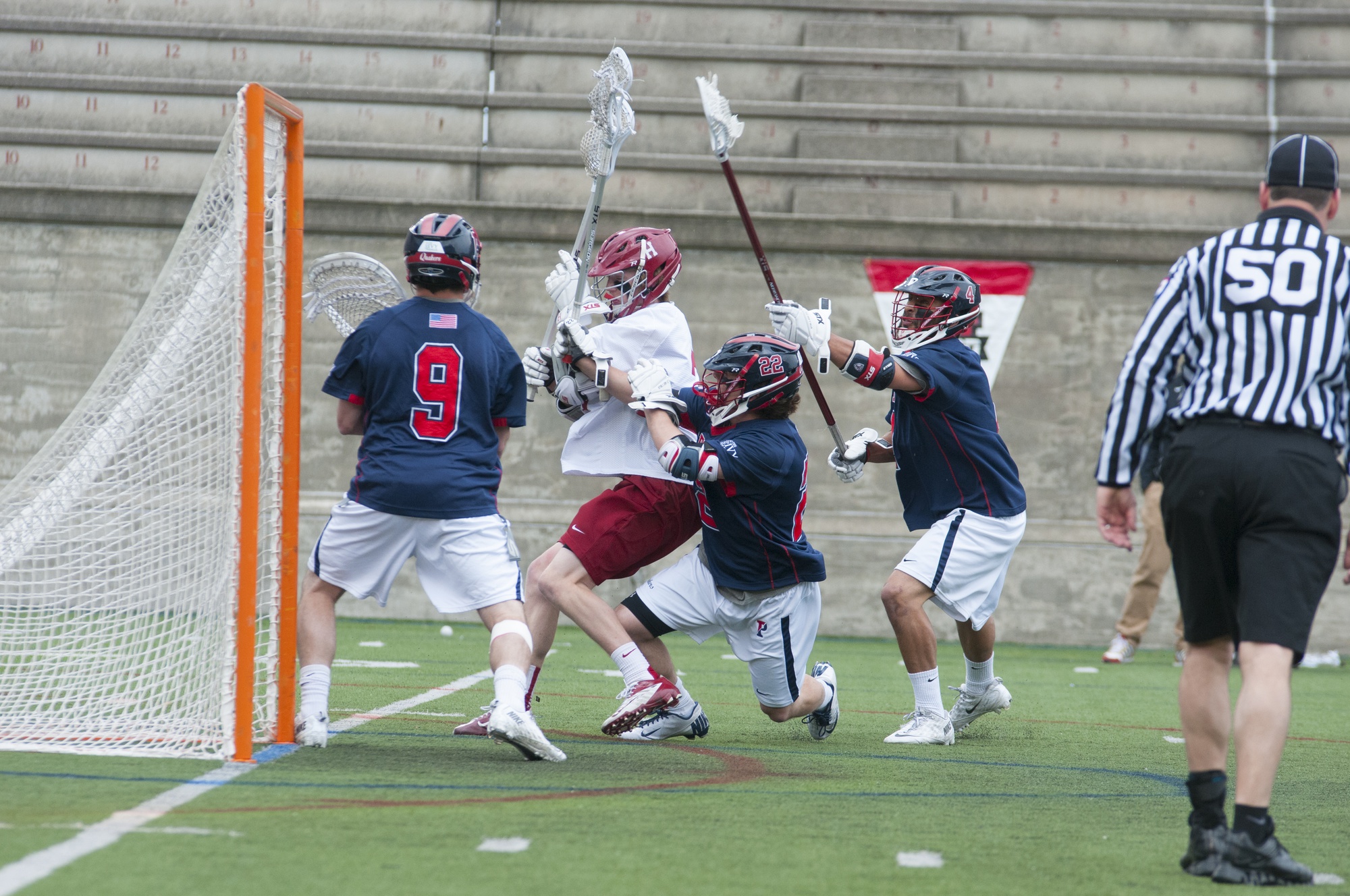 The men's lacrosse team could not clinch an automatic bid to the NCAA Tournament after falling to Penn Sunday afternoon, 7-5.
By Caroline L. Ferguson, Crimson Staff Writer

“It’s a heartbreaking loss for our players because they have played their hearts out,” Harvard coach Chris Wojcik ’96 said. “In a couple of areas, Penn was better than us overall, and in a really tight, close Ivy League game, that makes all the difference.”

“Feeney…is very quick, and he was a touch quicker than us today,” Wojcik said. “I thought we battled, but in the end it was a key area where they outplayed us, and in a tight game that definitely helped tip the balance.”

In the first quarter alone, Feeney scrapped for all seven ground balls at the 50-yard line, giving his offense a number of opportunities in its attacking half of the field.

Despite the faceoff losses, the Crimson began the game with a strong surge, taking a 4-0 lead in the first quarter. The Quakers then gathered their bearings and silenced the Harvard attack in the second and third quarters, tying the score at four heading into the final period of play.

“They’re obviously a good defense,” co-captain Peter Schwartz said. “That’s why they are ranked what they are ranked in the country…. But at the same time, we got away from some of the things that we usually do pretty well. I think we got a little comfortable because we had success early in the game.”

Harvard outshot Penn, 37-29, with 15 shots coming in the second half of play. However, the Crimson was unable to find the back of the net for nearly 45 minutes.

“They [have] a good goalie in there,” Schwartz said. “And then we just didn’t shoot the shots that we were planning on shooting.”

Harvard struggled with shot selection, an aspect that the team has not had much trouble with throughout the season. This competition marks the lowest scoring game for the Crimson in Ancient Eight play. Critical Harvard attackers—sophomores Devin Dwyer, Ian Ardrey, and Will Walker—put just two combined points on the board.

“We had less possessions,” Wojcik said. “I don’t think they shut Devin down, I just don’t think we hit our shots.”

After the Quakers responded to the early Harvard scoring drive with four unanswered goals, the Crimson defense answered by smothering Penn’s attack in the third. The scoring drought seemed contagious, as neither team got on the board in those 15 minutes of play.

“[The third quarter was] obviously a critical point in the game,” junior goalie Jake Gambitsky said. “We are tied at the half. We know that next goal matters a lot. So I think the [defense] did a great job. [It] buckled down, and did a great job of limiting what Penn may have been getting in the first half. We are definitely proud of that effort.”

Quaker players Nick Doktor and Isaac Bock, who scored 19 and 17 goals, respectively, during the season, managed to get the ball past Gambitsky just one time. Star attacker Zack Losco scored just three goals and was unable to pass for an assist, thanks in large part to a strong defensive effort from junior long stick midfielder Brian Fischer.

“Fischer did a great job,” Wojcik said. “Losco is their key engine offensively and in transition, and in 6-on-6 as well…. I thought we really executed our defensive game plan. And especially on those picks, Fischer was able to stay with the matchup and did a really great job locking him down.”

Fischer, who was awarded a spot in the All-Tournament team, tallied two ground balls and two caused turnovers for the afternoon, helping keep the Crimson in the game.

With the victory, Penn secured a automatic spot in the NCAA tournament. But Harvard’s postseason is not over yet. The Crimson, having secured an at-large bid, will visit sixth-seeded Notre Dame on Saturday.

“It’s out of our control,” Wojcik said. “There are a number of variables that will play out here…. I know that we are a great team. We hope to get a bid, but we don’t decide that.”