Innovation on Display at SEAS Design and Project Fair 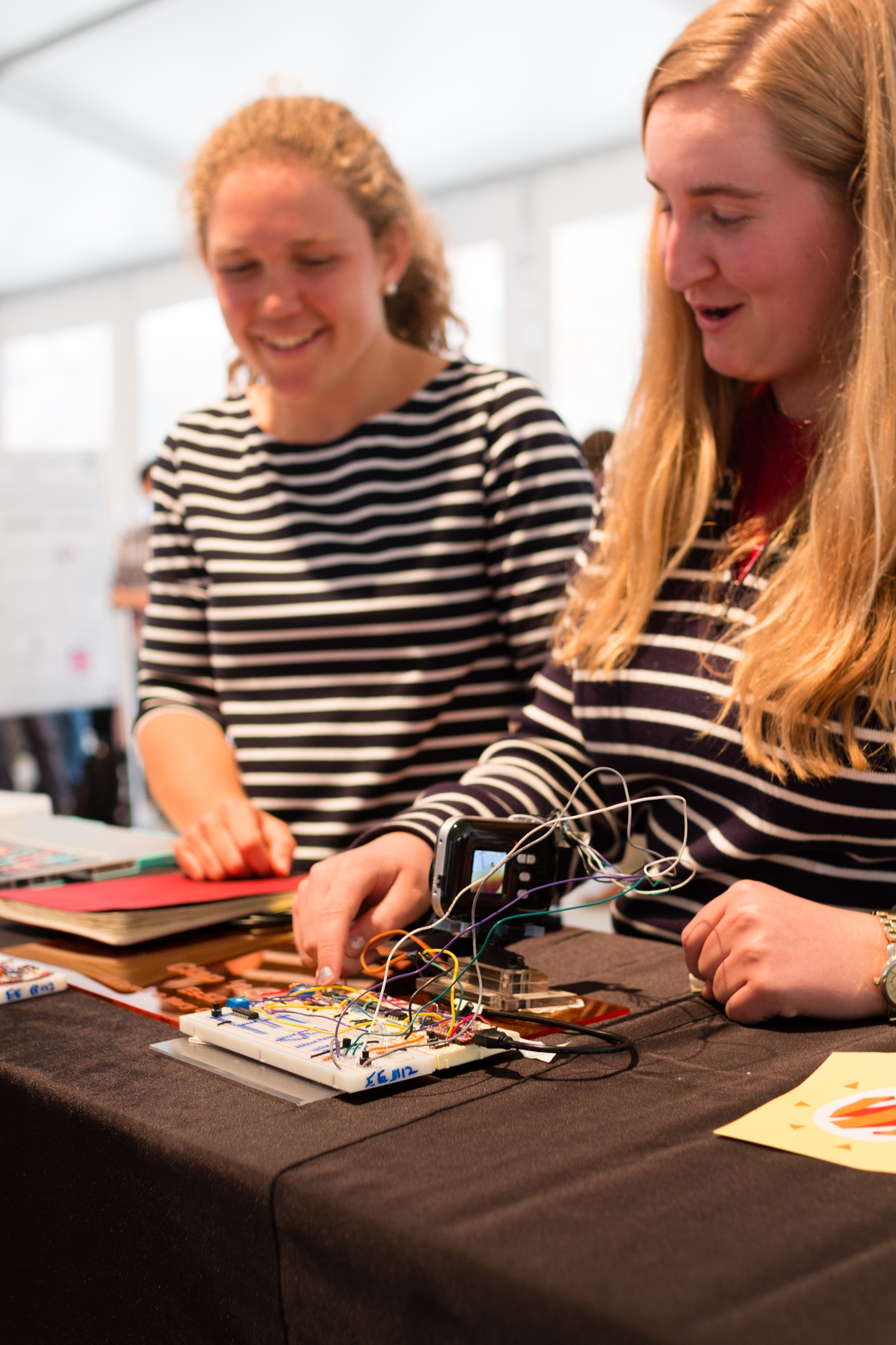 Mary Carmack '16, left, and Ali Forelli '16 ,right, present their ES52 project, "The Clap 'n Snap," which allows users to clap within a one meter radius of the camera, causing it to turn towards them and take their picture.
By Phil Delamater, Crimson Staff Writer

Members of the Harvard community gathered on Tuesday to display the products of their scientific ingenuity at the third annual School of Engineering and Applied Sciences Design and Project Fair.

Held under a tent in the Science Center Plaza, the event featured over 200 projects created by both graduate and undergraduate students in the fields of engineering, applied mathematics, and computer science.

Attendees were met with a variety of presentations with real-world applications, including a flying drone capable of capturing panoramic images, a hydrofoil kiteboard, and a doorframe that tracks the number of people in a room at any given time. 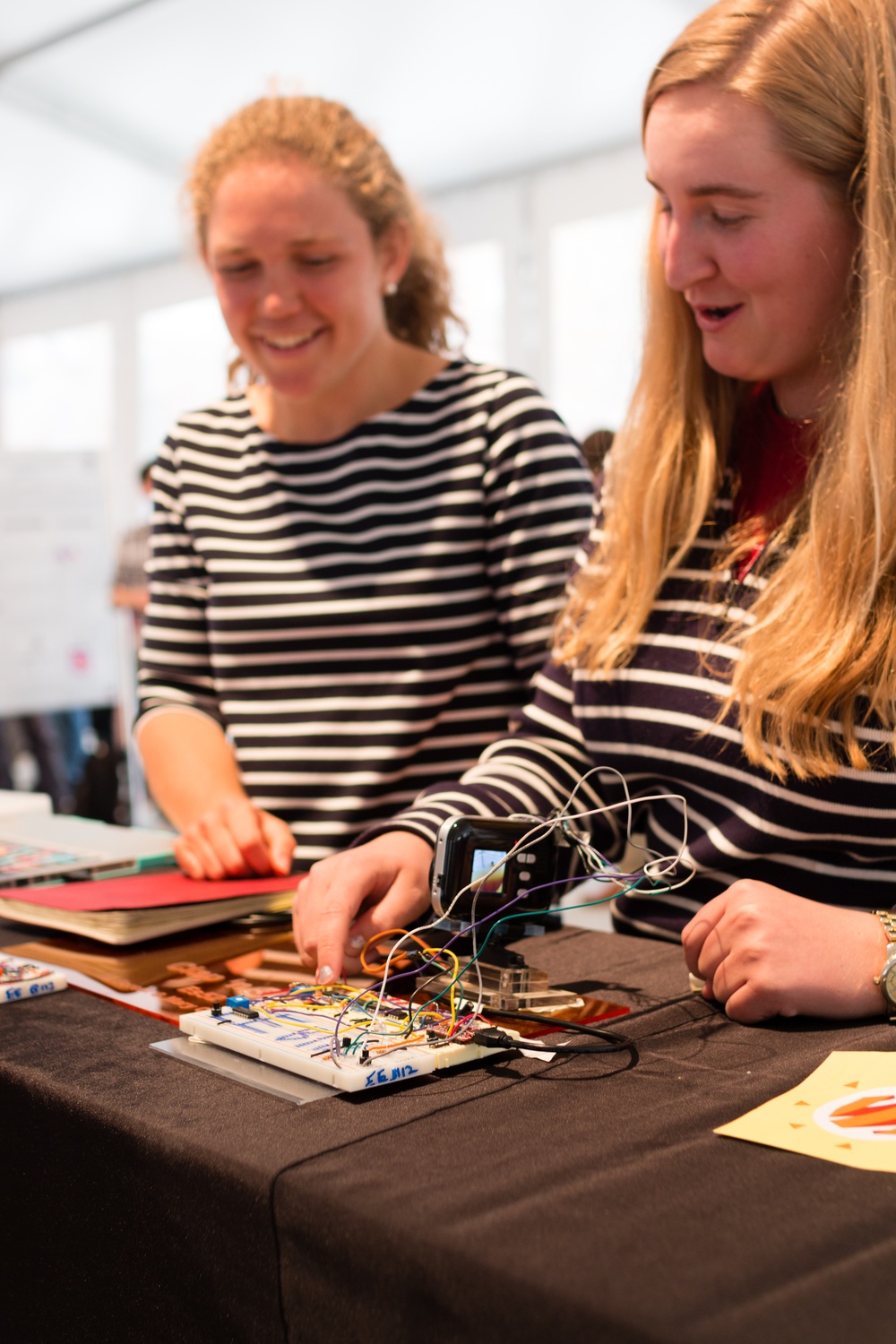 Mary Carmack '16, left, and Ali Forelli '16 ,right, present their ES52 project, "The Clap 'n Snap," which allows users to clap within a one meter radius of the camera, causing it to turn towards them and take their picture. By George J Lok

Students presenting at the fair said that the projects they designed allowed them to discover practical applications for their course material and, in many cases, explore their extracurricular interests.

“The members of our group are pretty musical, two of us play guitar, and Ian and I both play saxophone,” Rodrigo said. “So we knew we…wanted to do something musical.”

Inspired by a laser harp presented at last year’s SEAS fair, the group created a laser guitar that simulates the metal strings on a six-string guitar with lasers, producing similar acoustic effects to those of a standard electric guitar.

Near the entrance of the tent was a three-wheel solar-powered vehicle designed by Johnathan M. Budd ’15 and a group of 15 engineers. Already a year into production, Budd said that the group aims to make finishing touches and intends to enter the car in the Shell Eco-Marathon next spring. The competition pits 70 schools against each other as each vehicle attempts to travel a six-mile course using as little energy as possible.

Budd noted that the project, which the team began at the start of the academic year, spawned from a desire to bring together students who shared a passion for engineering.

“We started [the endeavor] because when I first came here there were no really big engineering projects at the school, and I really wanted to have a large extracurricular engineering group on campus,” Budd said.

Students said that the SEAS Design and Project Fair has played a similar role since its inception in 2012, bringing together students, faculty, and spectators with a common interest in innovation.

“This was such a new undertaking, we really had to design everything from the ground up,” Rodrigo said. “It was probably one of the most valuable group experiences I’ve ever been in.”

—Staff writer Phil DeLaMater can be reached at philipdelamater@college.harvard.edu.