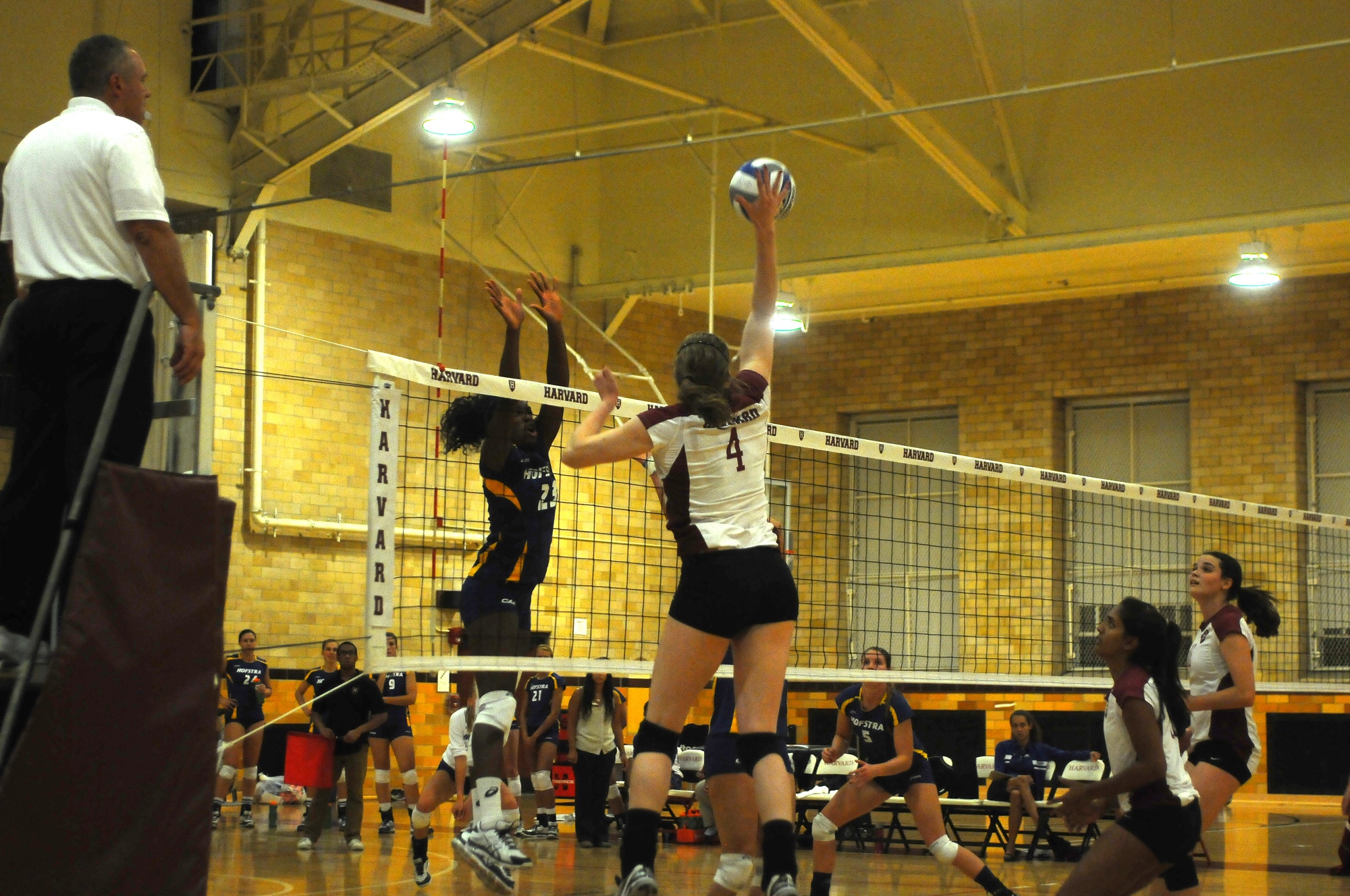 The Harvard women's volleyball team captured two of its three contests at the Benson's Hospitality Invitational, moving to 4-2 on the season. By Robert F Worley
By Kurt T. Bullard, Crimson Staff Writer

The Harvard women’s volleyball team (4-2) got off to a slow start this weekend down in Athens, Ga., at the Benson’s Hospitality Group Invitational. Despite dropping the first game to NC State (8-1) and the first set of the second game, Harvard was still able to capture some momentum and emerged victorious in its last two fixtures against Georgia (5-4) and UNC Asheville (2-8).

“Going into the weekend, we knew we would be playing three pretty tough teams,” sophomore Corie Bain said. “Our mentality was to kind of be the underdog and prove ourselves and what type of team we were, and I think we did that.”

In a game that featured two sets that went into extra points, Harvard was able to end the weekend on a strong note, beating the Bulldogs in straight sets in the Ramsey Student Center.

Tied at 24-24 in the third set and up, 2-0, the Crimson benefitted from two attack errors to notch its second win of the tournament.

“We are actually a very strong team when it comes to going down to the wire,” Bain said. “We realized that our first weekend at the Harvard Invitational. We’re a team of fighters.”

The Crimson did not have to rely on opposing attack errors to capture the first set. Knotted at 25 points a piece, Harvard pulled out the win after two straight kills from senior Caroline Walters, who led the team with 12 kills in the match.

Despite being up 20-14 in the fourth set, the Crimson let the Bulldogs claw to within two points, 23-21. But after a Harvard timeout, junior Caroline Holte came up with a kill to get the team to match point. Just as she had on the last point, Bain provided the assist—this time to junior Kathleen Wallace—to secure the Crimson’s first win of the invitational. In addition to her 29 assists on the game, Bain also led the team in kills with 14.

“We really rally and come back,” sophomore Grace Weghorst said. “We win games at the last minute. We fight at points 23 and 24 and don’t give up.”

Behind Georgia’s kill leader Lauren Teknipp, the Bulldogs secured the first set, 25-23. The Crimson found itself in a precarious situation in the second set, tied at 23 points apiece after having just lost the previous two points. But a crucial kill from Walters, assisted by junior Hannah Schmidt, tamed the Bulldogs’ momentum. A ball-handling error on the next play brought the Crimson to a 1-1 draw at that point in the weekend.

After ending last weekend in a loss, the Crimson was not able to reverse its luck in the opener of the Invitational, coming up short to the Wolfpack, 3-1.

“They’re a very good team,” Weghorst said. “But if we had turned some unforced errors into points, I believe we could have won.”

Down two sets to one and tied at 24-24, the Crimson needed to pull out the win to force a fifth decisive set. But an attack error and kill from NC State’s Perry Ramsey ended the Crimson’s hopes of doing just that, with the Wolfpack winning the set and the match.

The Crimson had managed to pull off a similar stunt. Down 26-25 in the second set, Harvard knocked off three straight points with kills from juniors Wallace and Jenn Shults, and an ace from sophomore Sindhu Vegesena capped off a second set win.  However, the Wolfpack responded with an emphatic 25-18 win in the third set to set the tone for the rest of the match.

The sophomore duo of Bain and Weghorst led the team in kills in the losing effort, with 12 and 11 respectively.