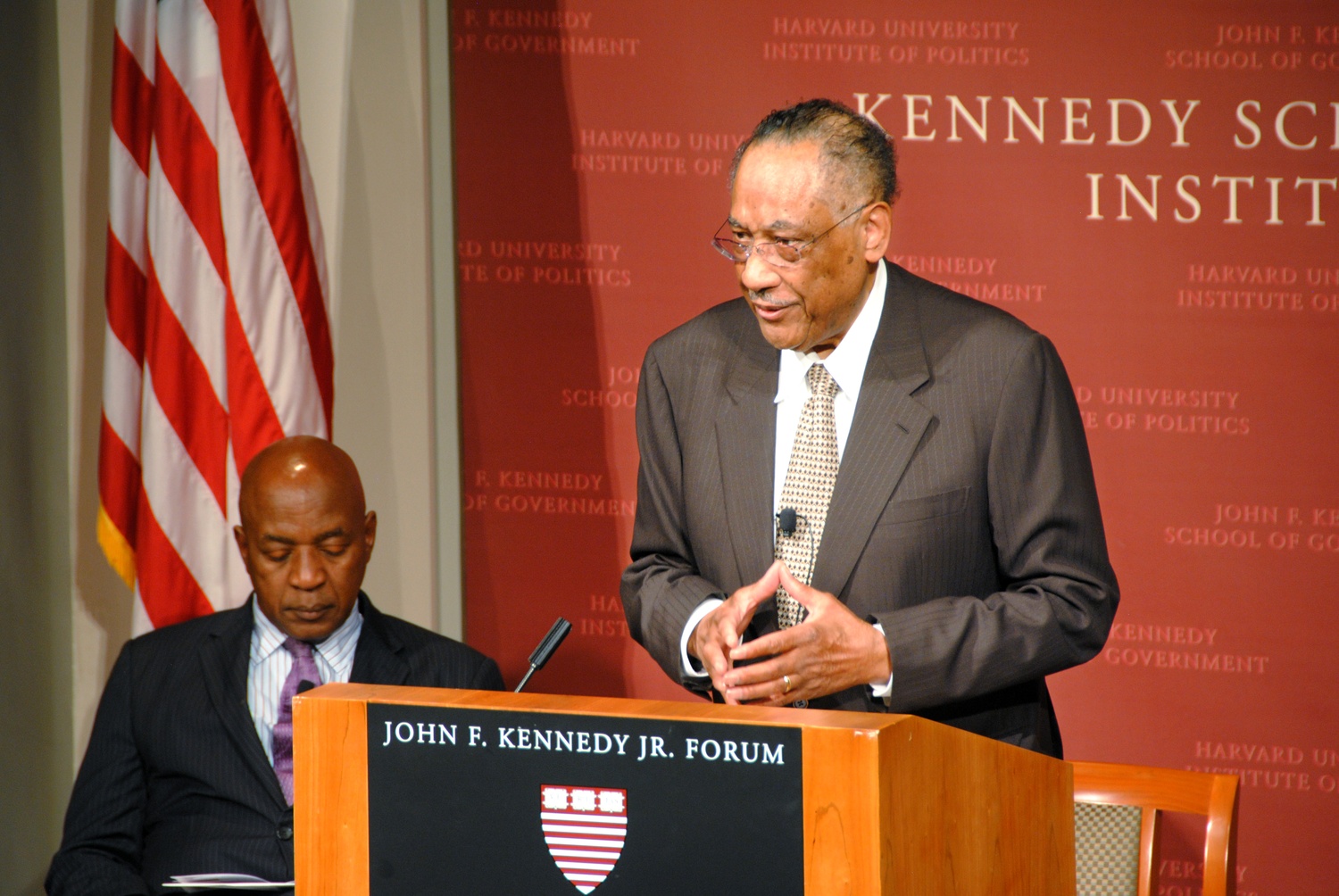 Former Chief of Police and Mayor of Houston, Dr. Lee P. Brown speaks about the unrest at Ferguson and the importance of community policing at the Institute of Politics on Wednesday. By Tiana A Abdulmassih
By Ivan B. K. Levingston, Crimson Staff Writer

In the wake of the conflict in Ferguson, Mo. this summer, police departments need to work even harder to build trust with their local communities, panelists at a John F. Kennedy Jr. Forum event said Wednesday.

The event, entitled “Reflections on Ferguson,” was moderated by Law School professor Charles J. Ogletree and featured panelists who included a former police chief, a current mayor, a reverend, and a Pulitzer-Prize winning journalist.

One panelist, Lee P. Brown, a former mayor of Houston and NYPD commissioner known as the “father of community policing,” said that the initial response from the local law enforcement reminded him of police actions during the 1960s.

“I’m convinced that if Ferguson’s police department had adopted community policing as their dominant style...the recent events would not have occurred,” Brown said. “First, the officer would have known Michael Brown.... Second, if a shooting did take place, the people would not have immediately assumed that the police were wrong.”

Speaking via Skype from her office, Baltimore Mayor Stephanie Rawlings-Blake echoed Brown’s concerns regarding both the militarization and lack of trust between the Ferguson community and police department.

“There is a time and place for military equipment and that is in response to a terrorist threat or after a natural disaster.... We don’t ever think about using the equipment we have against our own citizens, certainly not because they were exercising their first amendment rights,” Rawlings-Blake said.

The conversation also focused on the media coverage as events unfolded.

“The media of course are always well deserving of bashing for a variety of things.... There was of course sensationalism...and people reporting erroneously,” said Alex S. Jones, the director of the Shorenstein Center for Media, Politics, and Public Policy.

Jones compared the media reaction in Ferguson to that of reporters who covered the civil rights movement during the 1960s, highlighting how television was crucial in bringing shocking images of police militarization to the attention of the rest of the country.

“The media did a great service to us all by making those images something so vivid, they were vivid because that’s what was happening,” Jones said. “The media has been successful at putting that issue [of police militarization] on the national agenda and that is part of the service that media in its imperfect way, can do.”

Reverend Ray Hammond ’71 added that the incident has implications that reach far beyond Ferguson and urged everyone to take a closer look at the issue of race relations in community policing.

“Community partnerships have to be built before the crisis,” Hammond said. “This isn’t law enforcement’s job alone. I, you, all of us must be honest brokers between generations and across institutions.”