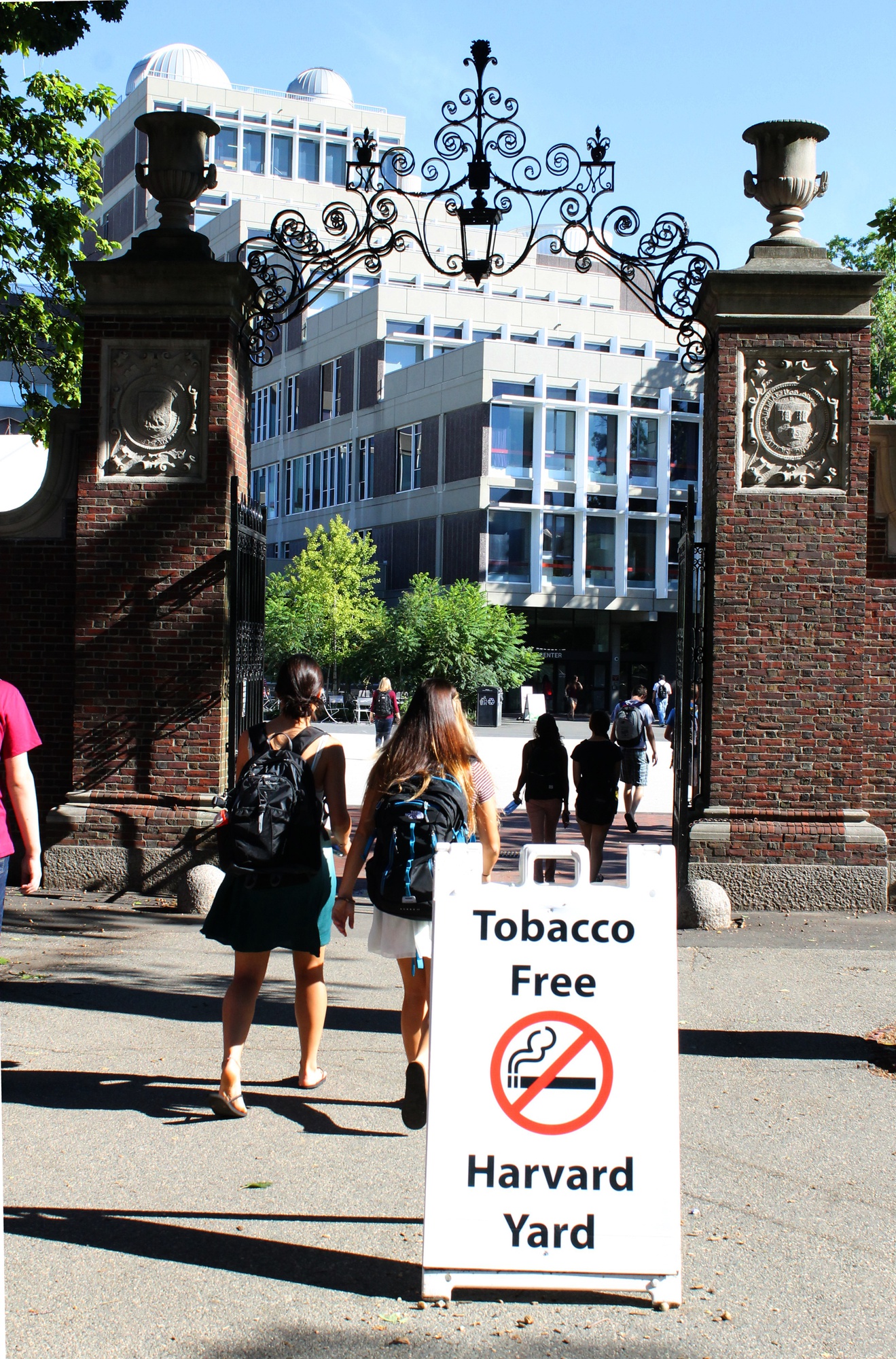 As of Aug. 15, smoking has been banned in Harvard Yard.
By Quynh-Nhu Le, Crimson Staff Writer

More than six years after student activists created a group to research the issue of smoking on campus, the College has banned the use of all forms of tobacco—including cigarettes, cigars, e-cigarettes, and smokeless tobacco products—in Harvard Yard, Director of Harvard University Health Services Paul J. Barreira and Dean of Student Life Stephen Lassonde announced over the summer.

Prior to this policy change, which took effect on August 15, individuals were permitted to smoke in parts of Harvard Yard, but smoking was banned within 25-50 feet of any University building. 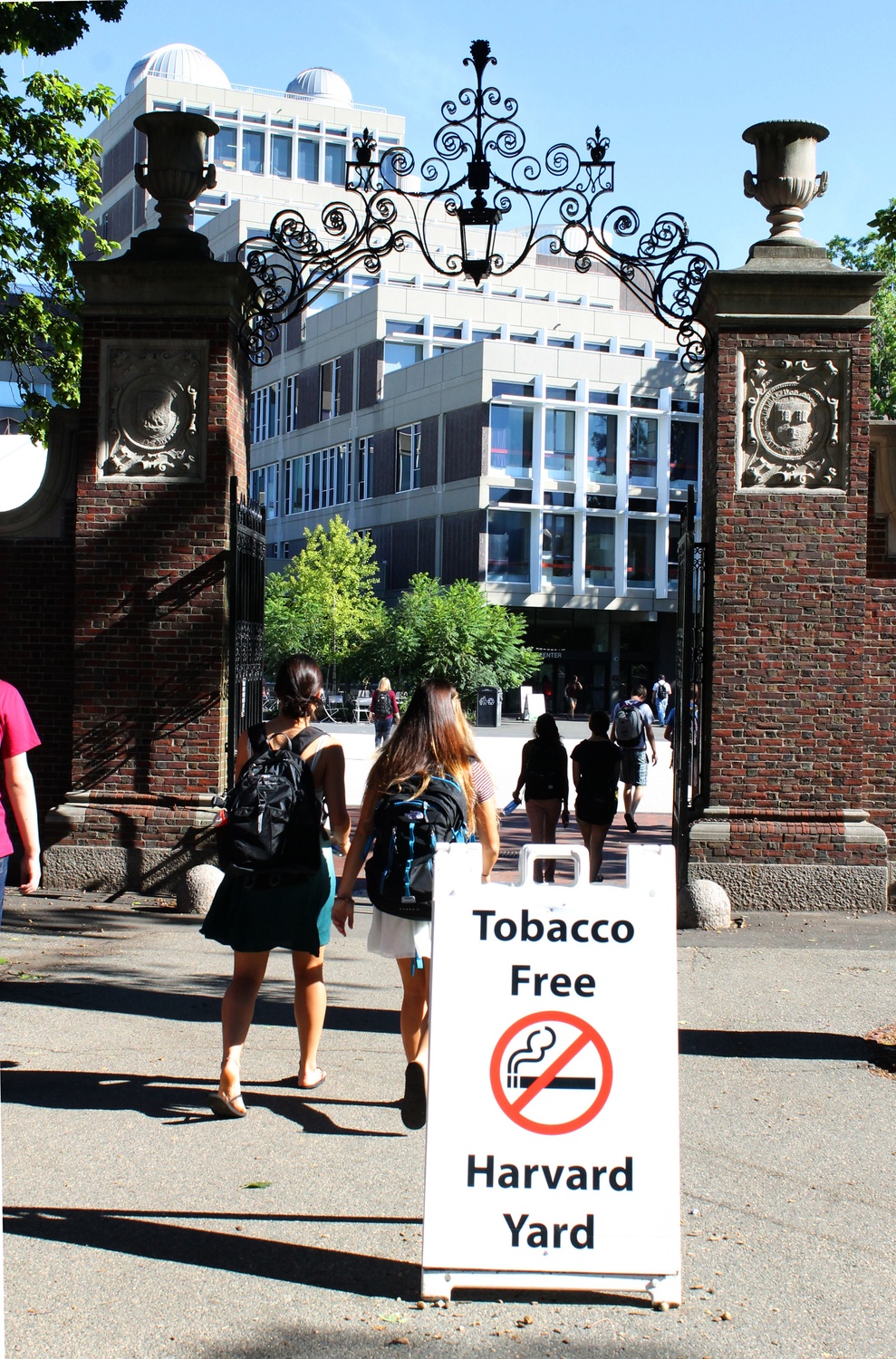 As of Aug. 15, smoking has been banned in Harvard Yard. By Jennifer Y Yao

The debate over on-campus tobacco use dates back to 2008, when student activists founded the Tobacco Control Policy Group at the Institute of Politics. The Committee on Student Life considered a Harvard Yard smoking ban in 2012 after the group released a memo detailing their research findings and recommending a University-wide smoke-free policy.

Mackenzie J. Lowry ’11, a co-founder of the policy group, said that she is proud of the impact the policy memo and was “thrilled” when she heard about the policy change because she believes that it will benefit the health of the Harvard community.

Professor Allan M. Brandt, an early advisor to the IOP policy group who has previously written an acclaimed book on the history of cigarette use in America, said that he believes the impact of the policy change will extend beyond just the Harvard community.

“We have so many visitors that it was actually a type of global health intervention at the micro-level,” he said.

However, the policy change has sparked mixed reactions from Harvard students.

Daniel Hughes ’18, a self-described “occasional smoker,” said he thinks that the ban is unnecessary.

“I’ve been to Harvard Yard previously, and it wasn’t exactly filled with cigarettes. It’s a fairly small thing,” he said, adding that individuals who choose to smoke are likely to be aware of health risks related to the habit. “I have noticed a trend that people who do smoke at all get sort of vilified by society.”

While Leila Y. Islam ’15 said she applauded the change as an extension of Harvard’s effort in recent years to promote green living and “healthiness inside and outside of student lives,” she said she remains doubtful that the policy could be enforced given the sizeable number of tourists the Yard receives each day.

According to an emailed statement from HUHS, members of Harvard University Police Department, Securitas, and Yard Operations are all authorized to ask tobacco users to desist or leave the Yard. In the statement, HUHS also encouraged all Harvard community members to feel comfortable doing the same if they were to encounter smokers in the Yard. For student smokers, HUHS will be publicizing and strengthening Harvard’s tobacco cessation resources to complement the policy change.

This policy change follows previous steps taken by the University to extend its tobacco-free policies. Harvard Medical School, the School of Public Health, the School of Dental Medicine, the Kennedy School of Government, and the Radcliffe Institute are all tobacco-free campuses. It also follows national trends towards prohibiting tobacco use on campuses. The U.S. Department of Health and Human Services founded the National Tobacco-Free College Campus Initiative in 2012, with some states requiring all public universities to be smoke-free.