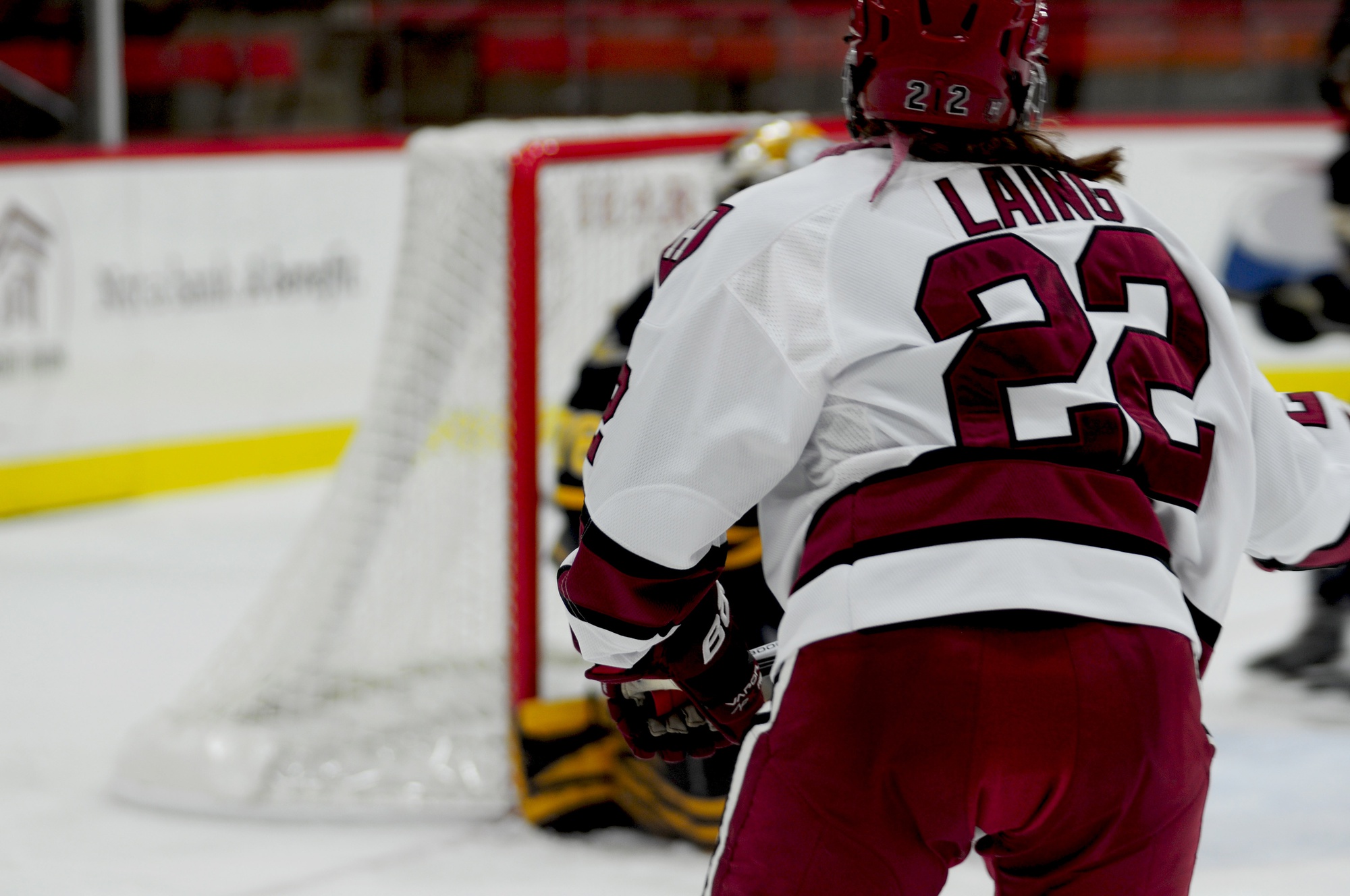 Freshman forward Lexie Laing, shown in previous action, found the back of the net in both of the Crimson's wins over the weekend.
By Cordelia F Mendez, Crimson Staff Writer

The No. 6/6 Harvard women’s ice hockey team notched its eighth and ninth straight wins, respectively, on an upstate New York road trip to Union and Rensselaer this weekend.

On one end of the ice, goalkeepers Emerance Maschmeyer, Brianna Laing, and Molly Tissenbaum combined for a near shutout over the pair—Maschmeyer and Tissenbaum each let in one goal—while on the other, freshman forward Lexie Laing notched two goals in both games.

The wins continue a pattern of hearty Crimson (11-2-2, 9-1-1 ECAC) defense in the second half of the season that has allowed no more than one goal per game against league opponents.

The Crimson struck thrice in the first frame as the first-year Laing took an assist from junior Mary Parker and sophomore Abbey Frazer to sneak the puck past Engineers goalie Kelly O’Brien. Exactly 10 minutes later, Parker and freshman Karly Heffernan provided another feed that allowed Laing to score yet again. Senior Sarah Edney closed out the frame with another strike to put the Crimson on top, 3-0, heading into the first intermission.

It took nearly two periods for Harvard to score again. A back-and-forth second stanza saw no scoring action for either team, and the same was true for the third period until Parker nabbed an empty netter with just under two and a half minutes to go in the contest.

Maschmeyer almost closed out the game with the team’s third shutout of the season, but a man-up situation for RPI proved too much to handle in the final minutes as Engineers forward Taylor Mahoney scored the only goal for her team on the power play with 38 seconds to go.

Yet again, it was Lexie Laing who provided offensive fuel for the Crimson in another near shutout at Union (4-15-3, 1-9-0) on Friday. The 7-1 win marked the team’s third game this season with a margin of victory of six goals.

Laing provided both the first and last goals of the game for the Crimson and chipped in two assists, both in the first period, for a career-high four points. Her older sister Brianna, a sophomore, guarded the net for the first two periods to record her fifth win—and start—of the season, shutting out the nine shots sent her way by the Dutchwomen.

Tissenbaum, who recorded her first career start and win against Union at home in November, relieved Brianna Laing in the third frame to scramble for nine saves and allow one goal, which came from the stick of Union forward Hannah Erickson with just under 10 minutes left in the contest.

The win was one full of offensive intensity, as Harvard recorded 31 shots on goal to Union’s 19, capitalized on one of its two power play opportunities, and saw six different members of the roster score a goal.

—Staff writer Cordelia F. Mendez can be reached at cordelia.mendez@thecrimson.com.