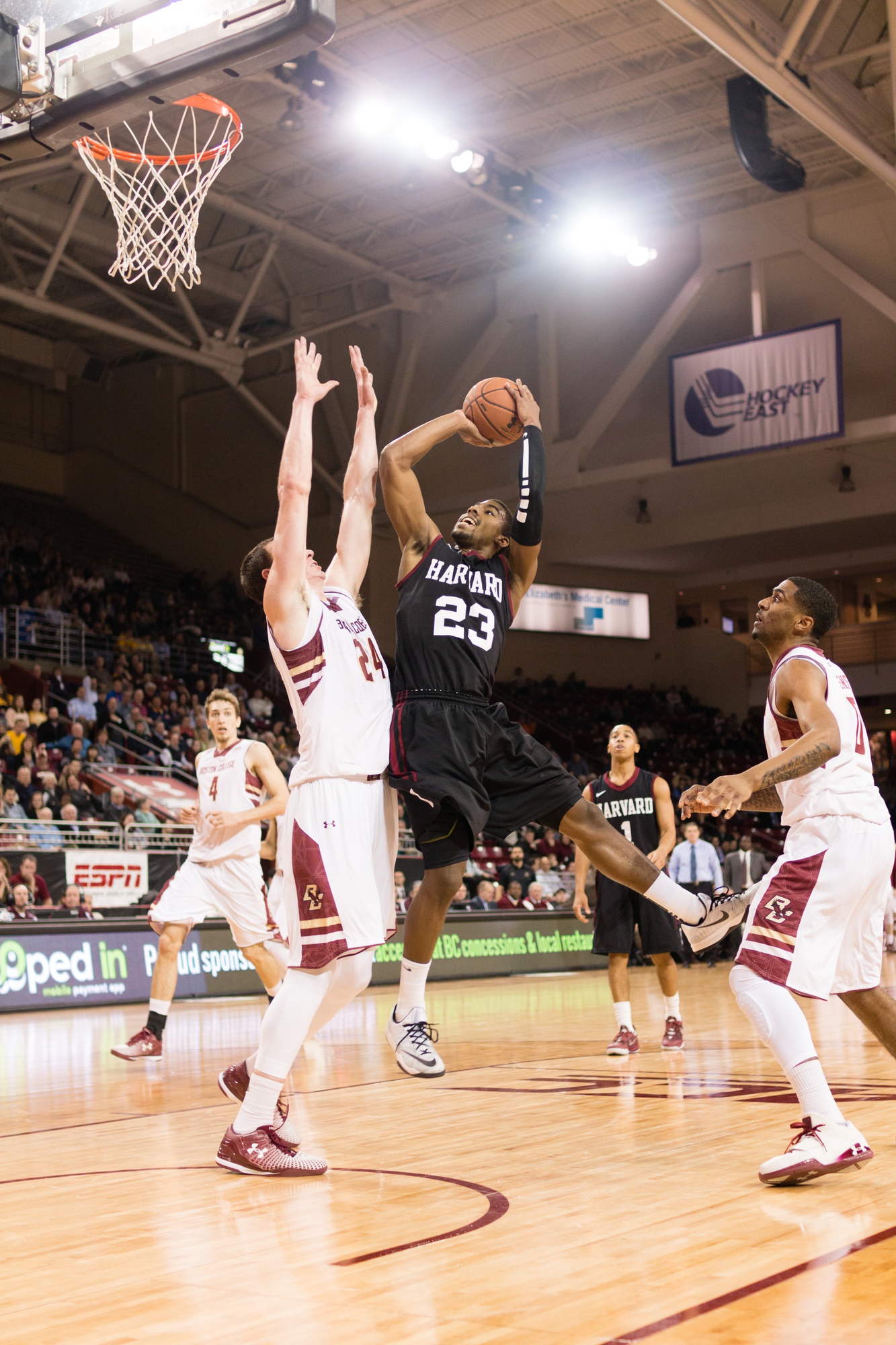 One would forgive Boston College fans Wednesday night for seeing a bit of Vitas Gerulaitis in their team. After losing six straight to the Crimson by an average of 13.3 points, the Eagles (8-7, 0-3 ACC) came out Wednesday night against the Harvard men’s basketball team (10-4, 1-0 Ivy) determined to turn it around.

With a 64-57 overtime decision that saw the Eagles blow the Crimson off the court for two five-minute stretches and struggle to score in the other 35, Jim Christian’s squad snapped a three-game skid and handed Harvard its third road loss in five contests.

On the day that he was officially cut from Naismith Trophy consideration, senior wing Wesley Saunders had arguably the worst game of his career. Tasked with the unenviable twosome of carrying the Crimson offense and shutting down star Eagles guard Olivier Hanlan, Saunders missed 15 shots and had seven turnovers—including an air ball and an errant pass on the last two possessions of the second half.

Afterwards, Saunders, who played all 45 minutes, was unwilling to accept the magnitude of his burden as an excuse for his play.

“It was definitely a difficult task given some of the sets that they run.... I have to stay locked in, and it was tough and took a lot of energy,” Saunders said. “[But] I have done it before, so it is not really an excuse.”

However, the game was more indicative of the wing’s recent play than a blimp in the radar. Since entering the Virginia game as unquestionably the Ivy League’s best player—garnering significant attention along the way—Saunders has yet to score more than 15 points in a game. He has registered six or more rebounds once in six games after doing so five times in the first eight contests.

Wednesday’s game illuminated the reason for Saunders’ struggles. The team as a whole shot under 32 percent and, outside of sophomore guard Corbin Miller, no player made a three. Junior co-captain Siyani Chambers is the only shooter in an anemic offensive starting unit, and without Chambers shooting consistently (0-for-6 from three Wednesday, 35 percent for the year), Saunders is left without room to operate.

With Saunders’ struggling, nobody better exemplified what the team did well offensively than senior reserve Jonah Travis. Travis had just four points in 17 minutes, but his four offensive rebounds gave the team a necessary boost, extending possessions as Harvard clawed its way back into the game.

After entering the game with 16 minutes to go and the Crimson down 11, Travis and Miller stopped a 5-0 BC run with 13 points in a 15-4 Harvard run. Twice in the second half, Travis rebounded a close miss and turned it into points.

The first, a soft turnaround jumper on the right block, brought the Crimson to within six. The second, two free throws with three minutes to go, brought Harvard even at 45.

“Sometimes for me as a coach, we get knocked back early and all of a sudden we have to bring it to a different level,” coach Tommy Amaker said. “I was hopeful we would be able to bring it to that level at the opening tap and for whatever reason they did and we didn’t, and Jonah came in and ramped things up for us.”

After 14 games, the loss Wednesday reinforced what have been the possible hamartias for the Crimson thus far this season: turnovers and spacing. Harvard turned the ball over 17 times on Wednesday, including 10 times in the first half—where it scored just 19 points. The team compounded the issue by shooting 21 percent from behind the arc, reducing its offense at times to isolation plays and side-pick-and-rolls for Saunders.

Co-captain Steve Moundou-Missi and Saunders were the prime contributors in both respects, making six of their 26 combined shots and throwing in 11 turnovers against just one assist.

However, following the game, Amaker referenced neither issue, noting instead that he was concerned about the team’s inconsistency.

“I think we are like a lot of people right now around the country [in] that we are a little inconsistent and haven’t put together a 40 minute game,” Amaker said. “I mentioned to our players that I thought we deserved the second half and they deserved the game.”

—Staff writer David Freed can be reached at davidfreed@college.harvard.edu.