Justice Ginsburg Will Receive Radcliffe Medal in May 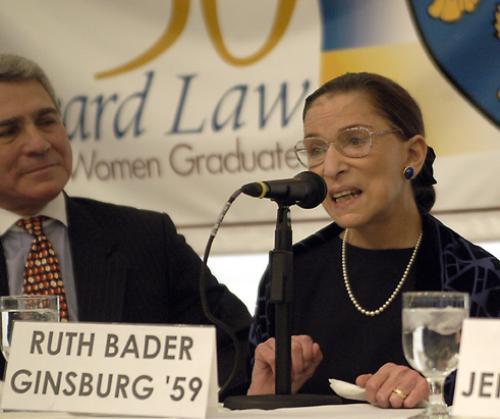 U.S. Supreme Court Justice Ruth Bader Ginsburg will receive the Radcliffe Medal this upcoming May in recognition of her advocacy for equality and justice.

The Radcliffe Medal is presented annually to an individual who has made significant and effective contributions to change and progress. Lizabeth Cohen, dean of the Radcliffe Institute for Advanced Study, wrote in an emailed statement that medal honorees exemplify the core values of the Institute and its predecessor, Radcliffe College.

“The quality of risk-taking and forging ahead is a hallmark of Radcliffe – from the women who attended the College to the innovative scholars, scientists, and artists at the Institute today,” Cohen wrote. “They are connected by a spirit of inquiry and a commitment to excellence.”

Ginsburg, who attended Harvard Law School, will be presented with the award on Radcliffe Day on May 29.

“Radcliffe Day is an annual celebration of Radcliffe’s past, present, and future,” Cohen wrote. “It is figuratively and literally a big tent occasion that encompasses the Radcliffe Institute...​ and the legacy of its predecessor, Radcliffe College.”

In addition to the medal ceremony itself, Radcliffe Day also includes a panel discussion in the morning connected to the medalist’s work. This year’s panel, “A Decade of Decisions and Dissents: The Roberts Court, from 2005 to Today," includes four panelists and will be moderated by Margaret H. Marshall, the former chief justice of the Massachusetts Supreme Judicial Court and a past Radcliffe Day medalist.