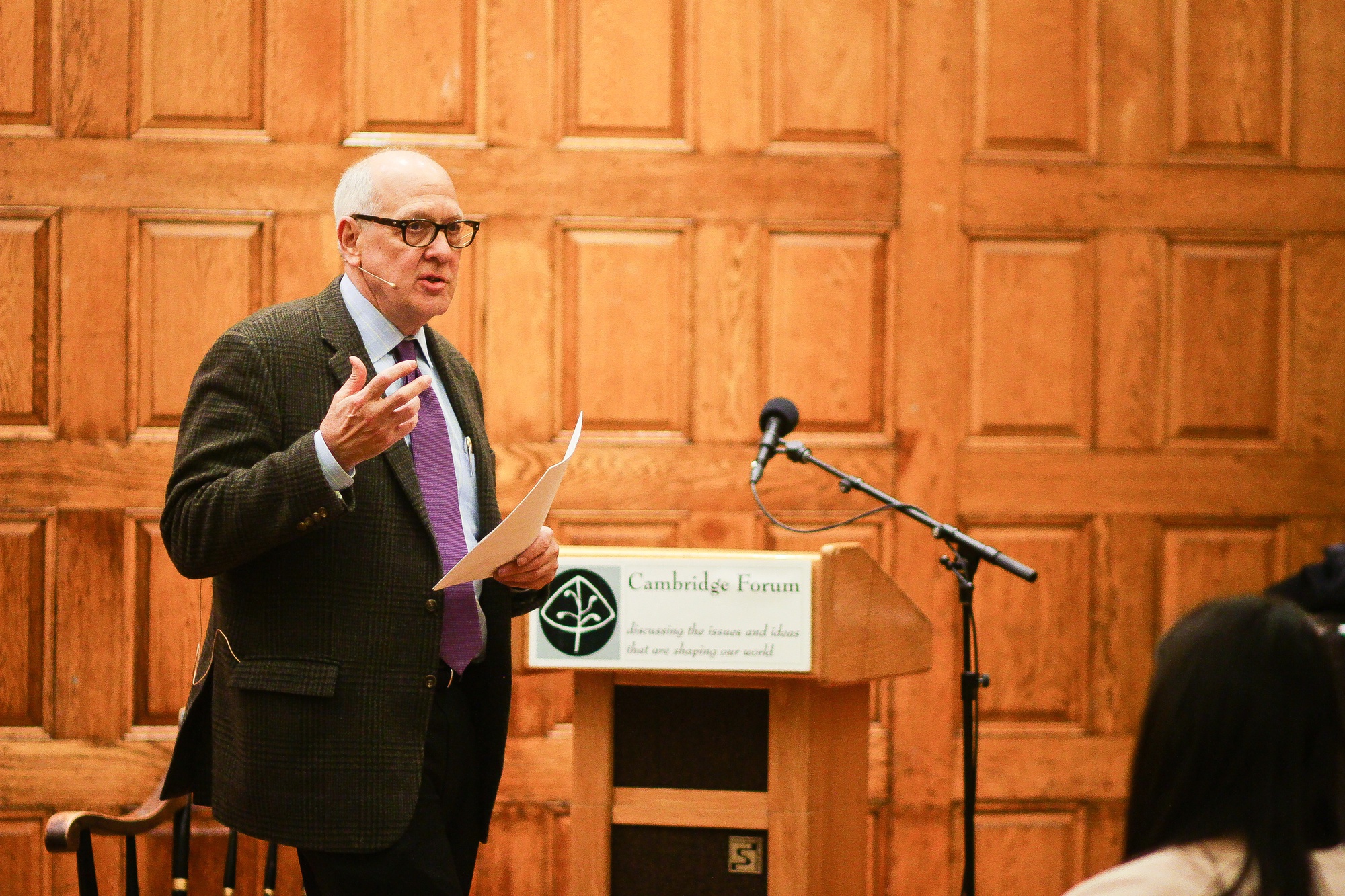 Alex Jones, director of the Harvard Shorenstein Center on Media, Politics, and Public Policy, speaks on the role of the media and journalism within a democracy, especially touching upon the history of the First Amendment. The talk was sponsored by the First Parish Church and moderated by Charles Sennott, founder of Global Post.
By Carolina I. Portela-Blanco, Crimson Staff Writer

At the first event in a series titled “The Health of Democracy,” Alex S. Jones, director of the Shorenstein Center on Media, Politics, and Public Policy, and Charles M. Sennott, co-founder of GlobalPost, said that the field of journalism is “under attack,” both from increasing digitalization and from physical threats against reporters and cartoonists.

Held Wednesday night at First Parish Church by the Cambridge Forum, “The Role of the Media” event drew a generally older crowd of graduate students, fellows, and local residents.

With the increasingly online nature of news, Jones said that “we are now at our own Gutenberg moment,” referring to the Gutenberg printing press that revolutionized information exchange in early modern Europe. While Jones acknowledged that the internet enables better communication and access to information, thereby lowering “the threshold for citizen engagement,”  he also raised concerns about it diluting the quality and accuracy of the reporting.

Jones added that the current state of journalism has led the world toward two extremes—one where everything can be said by publishing it online and one where nothing can be said, referencing the death of journalist James Foley, an American freelance contributor to GlobalPost killed by ISIS in August 2014, and the shooting at the office of French satirical magazine Charlie Hebdo that killed 12 people.

“Digital technology has made possible a world in which there are a lot of people who are having to try to figure out where they stand when it comes to a tolerance and a willingness to accept bad information...about themselves, in exchange for the right to be able to speak freely themselves,” he said.

Sennott also asked Jones about the responsibility of individuals such as Julian P. Assange and Edward J. Snowden on government-implicating data leaks.

While Jones said he believed “there are secrets that should be kept,” he also noted that “nothing Snowden has put out there has put anyone’s life in danger.” Jones called Snowden’s actions “illegal but not immoral.”

“If we look at democracy, we are going to have to find a way to find that compromising spot that allows as much free speech as we can tolerate, but also puts some limits on free speech,” Jones said.

On the future of journalism and the need for informed citizens, Jones said that excess of information and easy access to it via the internet could be perilous.

“The real problem is not that there is a dearth of information,” Jones said. “It’s that there are so many distractions that people are not bothered with news, and that is not the way citizenship works.”