Poehler Celebrated as Pudding's Woman of the Year 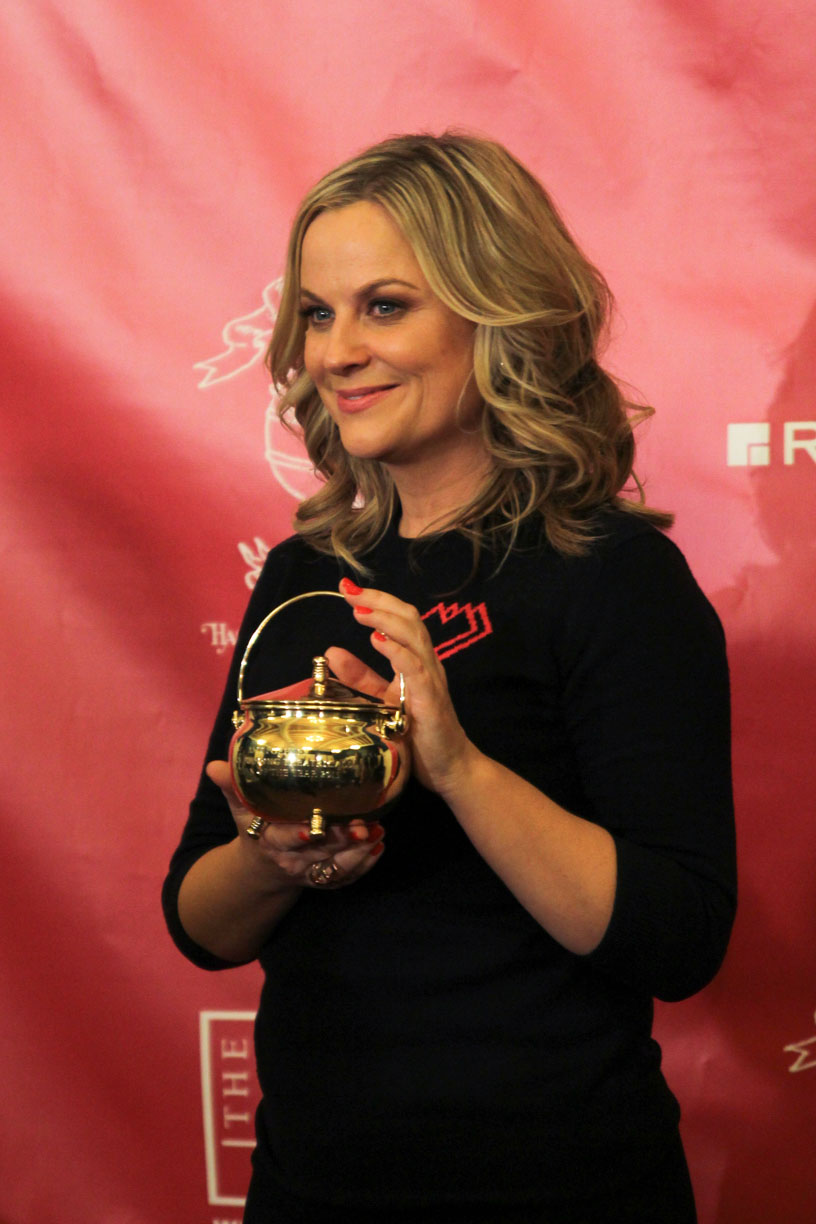 Comedian Amy Poehler was honored in a lavish celebration Thursday as the Hasty Pudding Theatricals’ Woman of the Year. After a parade and comedy roast, Poehler, the star of NBC’s sitcom “Parks and Recreation,” discussed the irony of receiving an honor at a university that she had long considered elitist.

The light-hearted barbs traded between Poehler and the Pudding emcees—President Jason S.  Hellerstein ’15 and Vice President Sam B. Clark ’15—at first focused on Poehler’s acting career.

“Our Woman of the Year believes that if she collects enough Emmy nominations, she might actually win one,” Hellerstein joked.

“I’d like to thank the Hasty Pudding for reminding us how hard it is to write funny jokes,” Poehler responded.

That exchange was quickly followed by commentary from Poehler, the daughter of a “blue-collar family” from Boston, on her old disdain for Harvard.

“As I drove by and gave the middle finger to [Harvard], I would’ve never known that this place would end up giving me so much shit,” Poehler, who was also a Class Day speaker in 2011, said of her teenage self.

Pointing to the all-male composition of the Pudding cast, Poehler joked that her youthful perception of Harvard as an elitist institution was not completely unfounded.

“I haven’t seen so many smiling white faces since I took my top off at a mime convention!” she exclaimed.

Preceding the roast, Poehler was escorted in a Bentley automobile from the Inn at Harvard to Farkas Hall by a parade that included Pudding cast members dressed in blond wigs and drag and police. Alongside a Duck Boat and three food trucks offering free samples, a large crowd of students made the slow walk down Massachusetts Ave.

Other students also commented on the frenzied crowd surrounding the food trucks and the difficulty of getting a photo with Poehler.

At the end of the ceremony, Poehler held a press conference during which she described Boston as a rough city and traced her sense of humor back to her childhood there.

She also discussed her recent memoir, "Yes Please," and offered advice to those seeking to achieve their dreams.

“Every day your small actions mean something. You do this repetitive stuff every day and you wonder if it really makes a difference—but I’m here to say that it does,” Poehler said.

—Staff writer Victoria Lin can be reached at victoria.lin@thecrimson.com.

An earlier version of this article incorrectly described the composition of the Hasty Pudding cast.