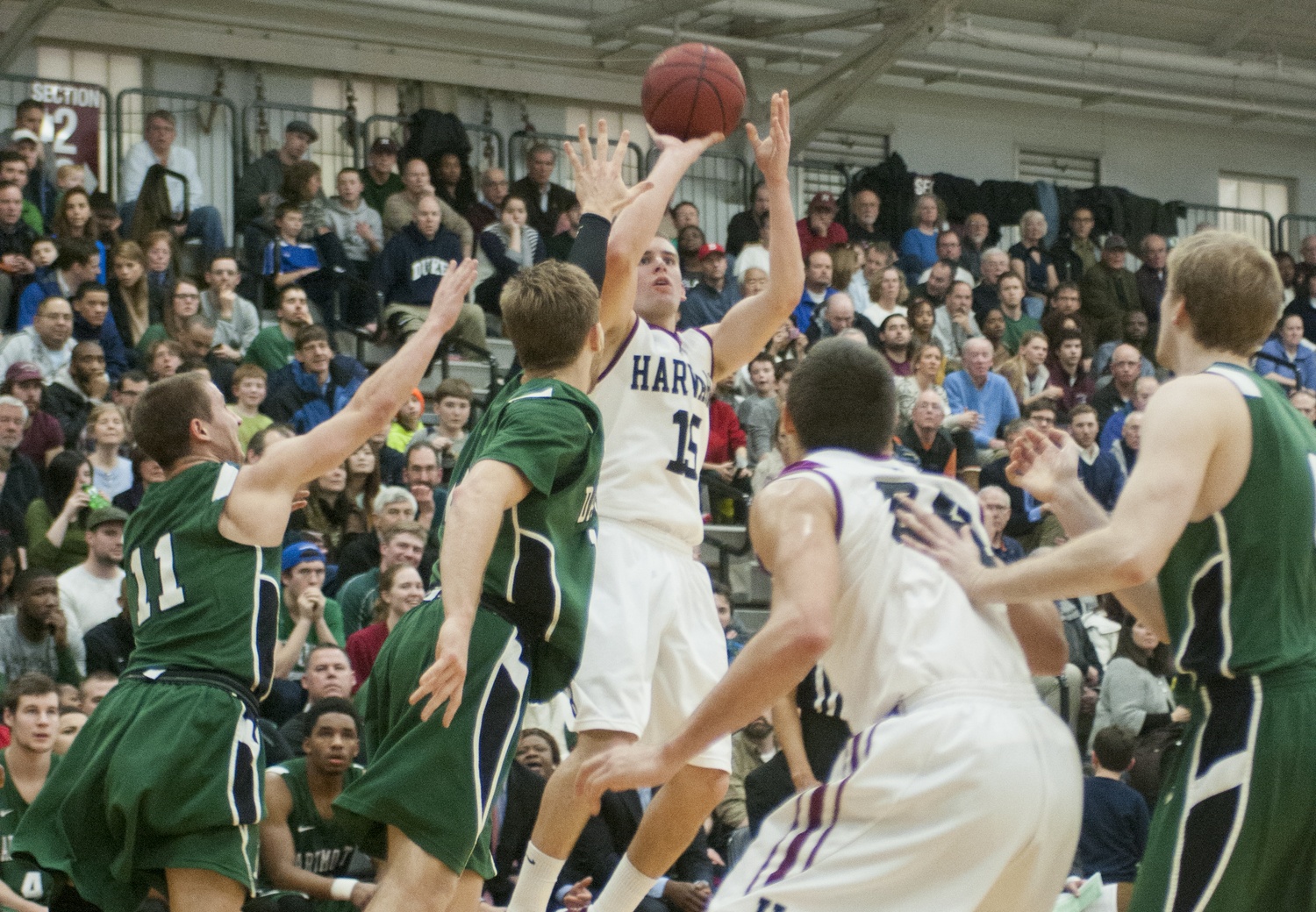 After a first half that featured a bevy of jump shots from beyond the arc, it was the other kind of three-point play that made the difference down the stretch for the Harvard men’s basketball team en route to its 75-72 victory over Princeton on Friday evening at Jadwin Gymnasium.

While the Crimson (12-5, 2-1 Ivy) held a double-digit lead at intermission, a layup, a floater, and a baby jumper from the Tigers in the first 82 seconds of the second period quickly brought Princeton (8-10, 1-1) back into the game. As the clock ticked towards the 16-minute mark, the Tigers kept slicing into both the paint and Harvard’s advantage, coming within three, 43-40, with 16:38 to play.

But on the next possession, Harvard turned to the senior that coach Tommy Amaker often labels the team’s “spark plug”—Jonah Travis. Travis caught an entry pass from classmate Wesley Saunders on the right block, put his head down, drew contact, and flipped in the layup. And one.

Forty-five seconds later, the Crimson ran the same set: Saunders threaded a pass down to Travis, who was waiting on the right block this time. With the Tigers’ interior defense out of position, Travis made them pay once more, converting his second three-point play in as many possessions.

What was a three-point game was stretched back to seven, and—after another and-one courtesy of Saunders and another pair of layups from Travis—Harvard managed to hold off a series of Tiger comeback attempts, ultimately earning its second straight win at Jadwin.

While the story of the second half might’ve been the Crimson’s post play, the storyline of the first period was undoubtedly what happened whenever sophomore guard Corbin Miller caught the ball on the perimeter.

Miller set a career high in three-pointers made—five—prior to the halftime buzzer, drilling as many treys in that period of time as Harvard did as a team in its outing against Dartmouth last weekend.

The sophomore effectively replicated his warm-up routine in those opening minutes, hitting a triple from each corner, each wing, and the top of the key.

In just the six minutes prior to intermission, Miller scored consecutive baskets on two different occasions, punishing the Tigers for their mid-game switch to a one-three-one zone defense.

At the 5:49 mark, Saunders dribbled down the baseline, finding the marksman for the three in the left corner. Forty-six seconds later, junior co-captain Siyani Chambers connected with Miller, this time in the right corner.

A step-back deep two and a straightaway three in the following minutes led Miller to tie his career high, 17 points, less than halfway into the game.

Like it had all game—and like it has all season—the Crimson relied on reigning Ivy League Player of the Year Saunders when it counted most on Friday night.

A series of missed Harvard free throws and a timely Princeton triple had kept the home team in the game, and a costly Crimson turnover with just eight ticks remaining in the contest gave the Tigers the ball under their own basket, down just four points.

Princeton inbounded the rock to forward Steven Cook on the right wing. While play seemingly stood still as Cook held the ball in front of him, deciding on his next move, Saunders’s hands never stopped moving. The senior swiped the ball out of Cook’s grasp, ending Princeton’s possession and, effectively, the game.

The last-second defensive effort marked just one of Saunders’s three steals on the night to go along with his 14 points, seven rebounds, and game-high eight assists.

“Wesley does a lot for us,” Amaker said. “[I]t’s not so much the points he scores, it’s the points he’s responsible for. He’s responsible for a lot for our team, and I thought his playmaking ability throughout the game was key for us. There’s no question he made some dynamic plays, and Jonah, Corbin, and others were the beneficiaries of his decision-making and his playmaking skills.”