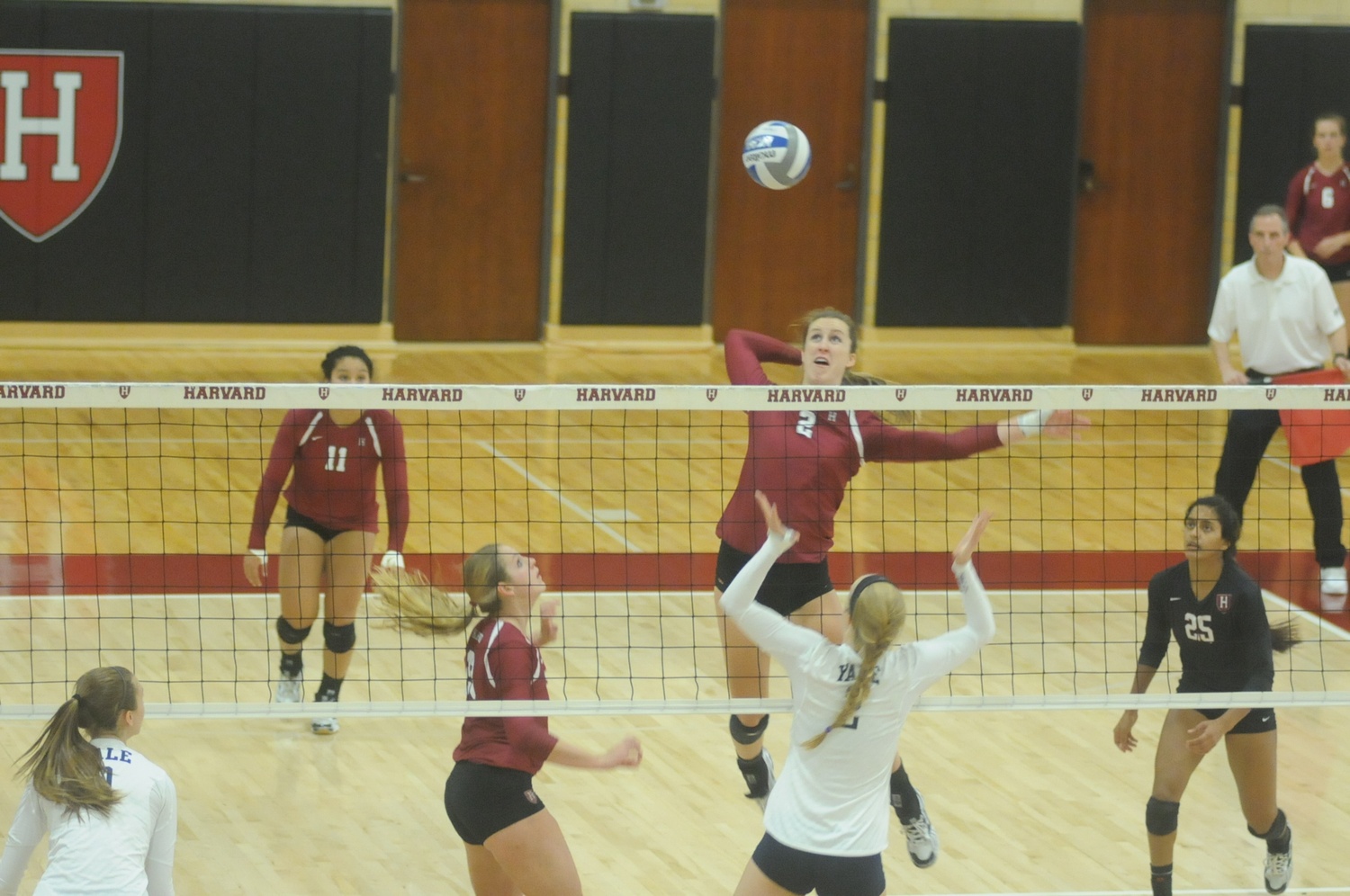 ­No team wants to have to rely on its bench players to win a game, let alone a crucial matchup against a conference-leading archrival. But that’s exactly the position that the Harvard women’s volleyball team found itself in on Saturday afternoon against Yale, held without the services of junior Grace Weghorst and freshman Christina Cornelius.

But based on the team’s performance, there was no easy way to tell that the squad was injury-depleted.

Buoyed by the play of freshman Jocelyn Meyer and sophomore Ellery Jones, Harvard (8-7, 4-1 Ivy) took down the Bulldogs (8-6, 3-2) in straight sets after edging Brown (8-8, 2-3) in five on Friday to propel itself from a precarious place in the conference standings to first place in the Ivy League.

“This was a really good weekend in terms of our tenacity and our depth,” senior Kathleen Wallace said. “I think we really proved that we could overcome a lot of very tough situations.”

Having never recorded four kills in a match before the start of the weekend, Meyer found herself with nine kills at the 13-13 point of the third set. After another of the freshman’s kills put the team up three, Meyer’s last kill was the most emphatic, sending a bad dig from the Yale side straight into the ground to give the team a 20-14 advantage, eliciting cheers from her teammates and the crowded Malkin Athletic Center.

“[The win] was a whole team effort,” Harvard coach Jennifer Weiss said. “That’s awesome that [Meyer] can step up like that.”

That kill was the final blow for the Bulldogs, as the visitors were unable to fight back and save the set. Junior Corie Bain finished the game with a kill straight through the middle of the defense, an exclamation point on Harvard’s sweep. Jones was also crucial for the Crimson, helping fill in the void left by Cornelius, who was tending to a sprained ankle. Jones had never recorded a kill in her career, but registered four on the night.

“Everyone on the team would agree that [Meyer and Jones] are two of the hardest working players in lift and practice,” Wallace said. “We have full confidence in them. We’re so glad that they played lights out. They’ve been training so hard for this moment.”

After taking home Ivy League Player of the Week honors last weekend, senior Kelly Johnson only recorded four kills for Yale in what appeared to be limited action. Freshman Kelley Wirth, however, was a bright spot for the Bulldogs on the day, notching a team-high 12 kills.

Harvard did not trail in the match at any point, taking 5-0 leads in both the first and third sets.

Entering this weekend, the Crimson had fared poorly in fifth sets, only eking out one win in five tries.

But in a crucial conference matchup, the Crimson took its fate into its own hands, starting off the set with a Corie Bain kill followed by three straight points off of Bain serves. Two kills from co-captain Caroline Holte and one more from senior Kathleen Wallace shot the team out to an insurmountable 10-3 lead.

“It took us digging in and being gritty,” Wallace said. “Brown is a really scrappy team. We had to be patient and I think we did a much better job than we have in the past.... of playing our own game.”

Harvard found itself in tie breaking points with Brown in the second and third sets, but was unable to edge out the Bears, falling into a 2-1 deficit. Brown took a 3-0 lead in the fourth set, but Harvard was able to tie the game at four behind kills from Kebe and Meyer. The Bears would not hold a lead for the rest of the game.

Christina Cornelius left the game in the fourth set with a sprained ankle, just one kill and block away from nabbing a double-double. But Bain, Wallace, and sophomore Paige Kebe were able to pick up the slack, notching 16, 14, and 11 kills, respectively.

Last week’s Ivy League Rookie of the Week, Sabrina Stillwell, and junior Payton Smith led the Bears with 13 kills each.