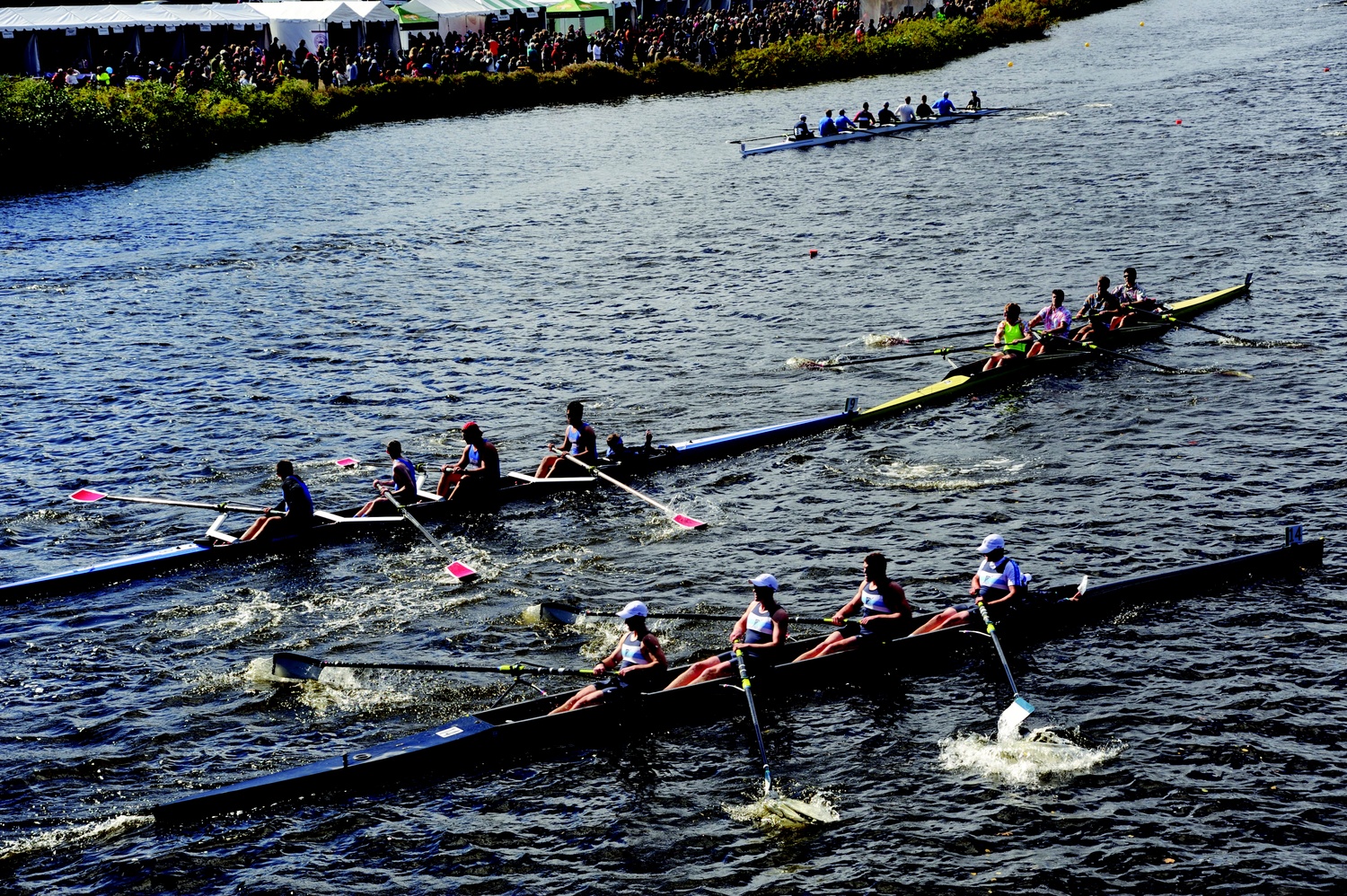 Hundreds of boats from across the country competed in club and collegiate races over the weekend on the Charles River. By Matthew W DeShaw
By Katherine H. Scott, Crimson Staff Writer

­Though both days saw brisk and breezy autumn weather, Harvard Square was abuzz with activity this past weekend, as thousands of people from across the nation came out to watch various collegiate, alumni, international, and club boats compete in the 51st annual Head of the Charles regatta.

After last year’s performances, the Harvard men’s heavyweight and lightweight crew teams had high expectations to live up to. Both teams’ boats looked to remain in the top three of the club eight and four races and succeeded in doing so after strong performances across the board.

The heavyweight team, which proved last year that it could compete with national teams, performed at its usual high level, even after having to deal with colder and windier weather on Sunday for the championship races.

The varsity eight boat, which featured a new lineup that had been decided on just a week before the event, stroked to a strong finish, especially against rival Yale, but ultimately fell short of the top spot. The eight finished in third place, three seconds behind the Elis and two seconds behind the University of California, with a 14:21.4 mark.

“We were really expecting competitive paces from Yale, Cal, Washington, Princeton, and Brown,” captain James Croxford said. “Yale [is] our main rival, so we were hoping to be competitive with them.”

Croxford and sophomore coxswain Cole Durbin led the boat to stay within six seconds of Yale’s time as it passed the Riverside and Weld bridges. Upon reaching the Cambridge BC bridge, the boat was just two seconds off the mark. Ultimately, the Crimson was unable to make up the difference.

The 2V, meanwhile, wasn’t far behind, as the boat–coxswained by sophomore Jacqueline Goodman–took home eighth place with a time of 14:41.9.

“I think as a crew we thought we rowed a solid pace, but obviously as the results show, there’s a little bit of room for improvement,” Croxford said. “ As a team I think we performed quite well over the weekend.”

The V4 boat, with freshman coxswain Jennifer Kunes, sophomores Benjamin Strathmore and Dominic Glover, and juniors Sean Vedrinelle and Chase Buchholz, finished 11th of the 14 boats that competed in the race with 17:00.2. The boat trailed Brown by 13 seconds and beat Penn by three seconds.

In the trials the day before, the Crimson had two boats in the men’s Club Eight race, and one in the Club Four race. Both varsity eight boats finished in the top 15. One boat, coxed by sophomore Maddie Zabriskie, finished fourth at 15:19.9, and the next came in just over half a minute later at 15:53.4, earning 14th place.

The varsity four boat was a young one with three sophomores and one freshman, in addition to a freshman coxswain. The boat came in 25th place with a time of 18:33.8, in the middle of the pack of 52 boats.

The lightweight crew team’s performance at the regatta hearkened back to last year’s Men’s Eights Collegiate race, where the team was edged out by Princeton in a tight contest that went down right to the finish line.

Like last year, the Lightweight Eights championship race came was a battle between Princeton, Harvard, and Yale.

“No one was really putting pressure on us to win,” junior Jack Kelly said. “It was really up to us to have the best race we could. It was just unfortunately we fell a little short.”

Upon passing Riverside, all three boats were within three seconds of each other. The Tigers began to pull away as the teams passed Weld and Cambridge, but the Crimson was not far behind, trailing by less than six seconds. Ultimately, Harvard, led by captain Sam Frum, fell by 8 seconds to Princeton to earn third place overall. The time of 15:05.8 was also good enough for second among collegiate boats.

Staff writer Katherine H. Scott can be reached at katherinescott@college.harvard.edu.