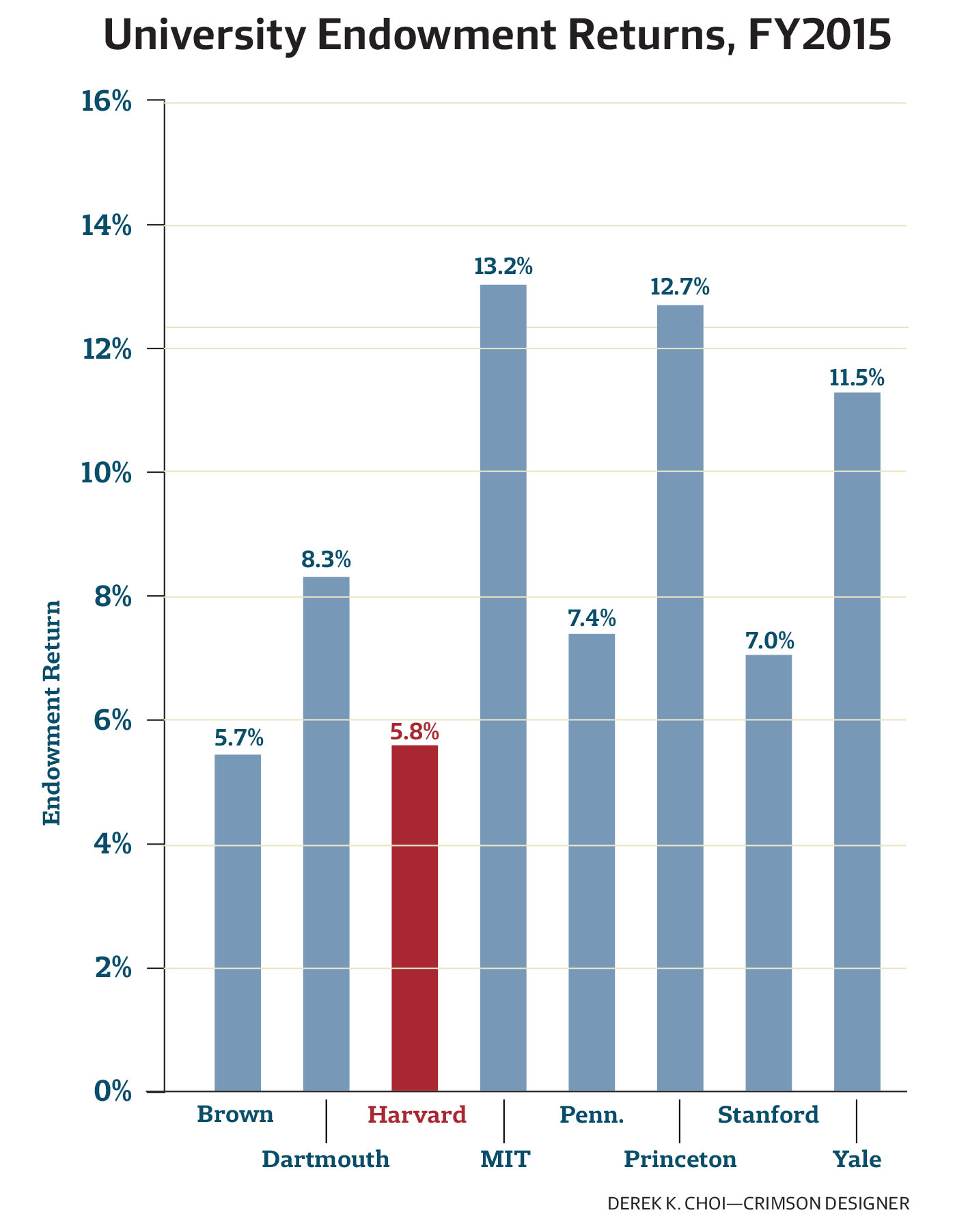 After another year of lackluster returns at Harvard Management Company, University President Drew G. Faust said Tuesday that she is concerned about the company’s performance and hopeful that new HMC CEO Stephen Blyth can return the fund to the top tier of institutional investors. 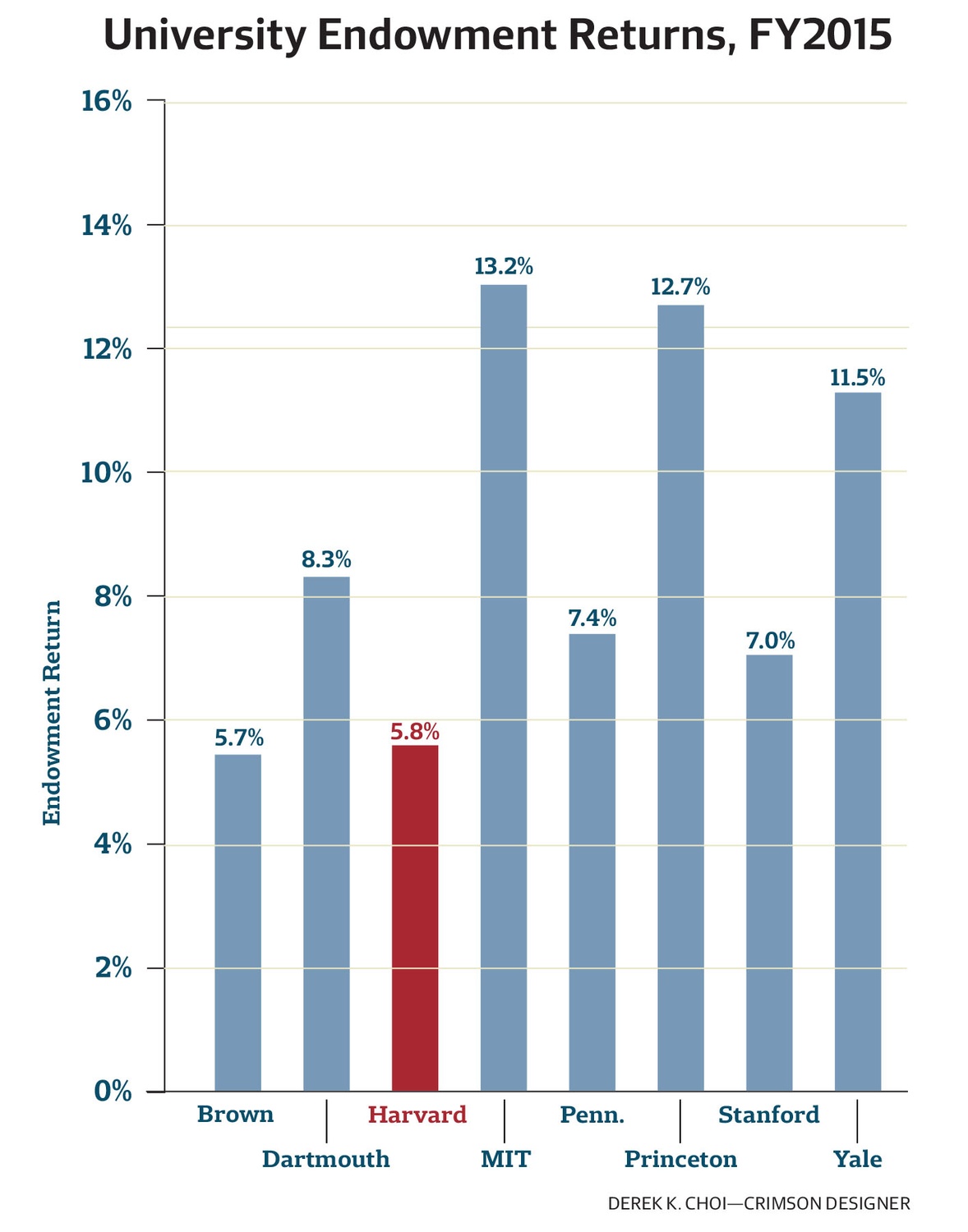 Though HMC earned returns of 5.8 percent in fiscal year 2015 and increased Harvard’s endowment to $37.6 billion, nearly all of its peer institutions bested the company in endowment performance. Yale, Princeton, and MIT doubled Harvard, returning 11.5 percent, 12.7 percent, and 13.2 percent on their respective endowments. Harvard did fare better than the University of Texas System, the second largest endowment, and the Standard and Poor’s 500 index.

“We obviously did not do as well as MIT and Yale and others, and that of course is a concern, and it's very much a concern for Stephen Blyth, who has been making significant changes,” Faust said in an interview on Tuesday.

Harvard has a lot at stake when it comes to investment performance. Just a 5 percent difference in HMC’s returns—which in fiscal year 2015 did not account for the gap between Harvard and the top endowments—is the equivalent of close to $2 billion, nearly a third of Harvard’s record-seeking $6.5 billion capital campaign. The $2 billion figure could also cover the entire House renewal budget and hundreds of new professorships. The annual budget for the Faculty of Arts and Sciences, Harvard’s flagship teaching and research body, was $1.3 billion last year.

HMC’s underperformance is not new. From FY 2009 to FY 2013, under the leadership of former HMC CEO Jane L. Mendillo, Harvard’s returns ranked last in the Ivy League, according to an analysis from Charles Skorina, who manages a firm that recruits chief investment officers and financial executives. Another Skorina analysis compared compensation to performance over the same period, ranking Mendillo—the best paid endowment executive in the study—last in the Ivy League.

Blyth, in his first year as CEO, has pledged changes to HMC’s structure and compensation, sharing plans last month to tie pay more strongly to the fund’s overall performance. Blyth also set a goal to notch returns in the top quartile of the 10 most valuable University endowments.

That is a benchmark that Harvard used to meet easily, but HMC has not achieved it since FY 2008.

That underperformance has worried observers.

“I look forward to seeing Steven Blyth's plans for what I hope will be major change at HMC,” former University President Lawrence H. Summers, now a University professor, wrote in an email Tuesday night. “The fact that Harvard’s performance has lagged our peers by ever increasing amounts since the financial crisis is deeply troubling. The quality of the endowment's performance, far more than fundraising, will determine whether Harvard remains preeminent."

Skorina urged critics to give Blyth time to make changes.

“You have got to give him five years,” Skorina said.“They gave [Mendillo] five years, the returns were average to mediocre; she left.”

Harvard pays its financiers far more than Yale. In 2012, Mendillo made $4.8 million, while Swensen made $2.9 million.

Though Faust said the University has “a ways to go” with its returns, she expressed full confidence in the direction in which Blyth is leading HMC. She said she communicates with Blyth frequently, meeting with him monthly and talking constantly outside official settings.

In the past month, HMC has seen some personnel change. Andrew G. Wiltshire announced retirement plans from his alternative assets managership, and last week, two high-level HMC executives departed with little notice. Faust said the departures were a natural byproduct of the transition.