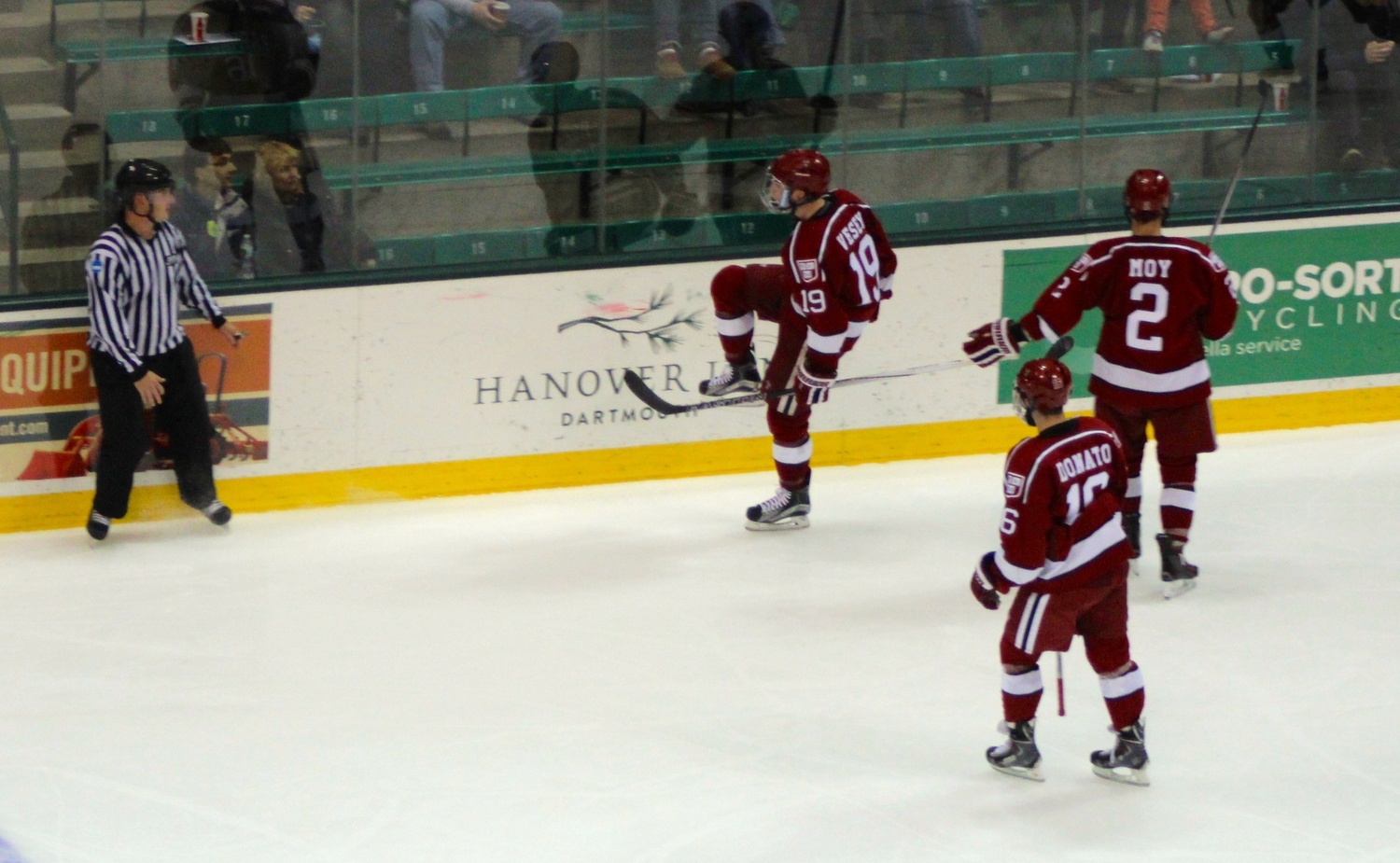 HANOVER, N.H.—Jimmy Vesey took the puck coast-to-coast before windmilling his arm in celebration toward his bench.

In his senior season opener on Halloween, Harvard’s scoring ace picked up where he left off, and the rest of his team followed. Seven different players scored in a 7-0 rout at Thompson Arena as the Crimson men’s hockey team overwhelmed Dartmouth in a dominant display of speed, skill, and depth. 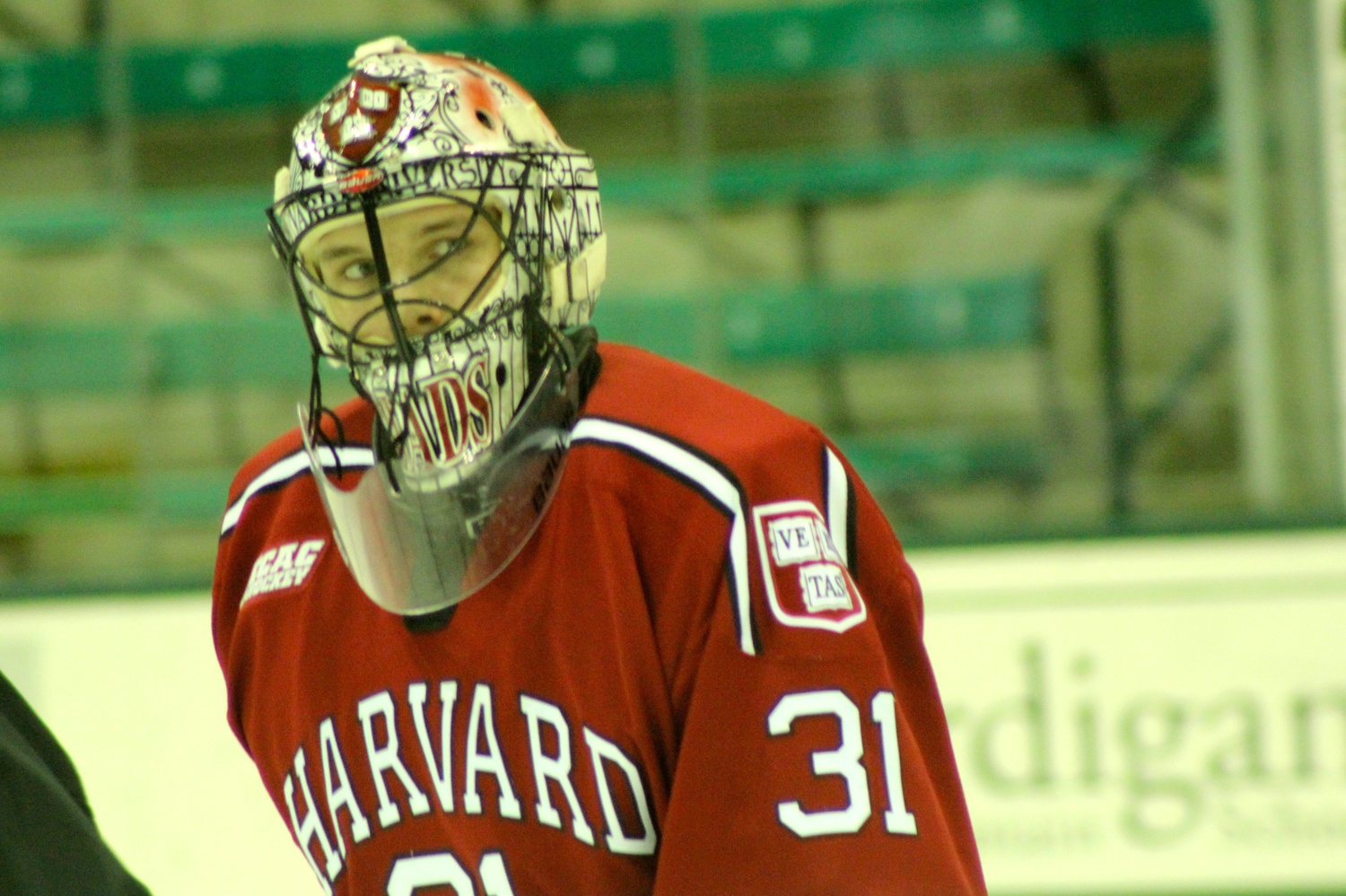 Sophomore Merrick Madsen earned a shutout to go along with 25 saves in his first career NCAA start in net. By Michael D. Ledecky

Goaltender Merrick Madsen received the team’s player of the game hat with 25 saves and the shutout in his first career NCAA start,but Harvard’s scoring spree kept the pressure off the sophomore netminder for most of the game.

“We certainly have some guys who can make plays, but I thought we did a good job holding onto a lot of pucks down low and making them have to play defense, all the way up and down the lineup,” Harvard coach Ted Donato ’91 said.

Vesey’s Hobey Baker campaign got off to a great start as the senior finished with a highlight-reel goal, three primary assists, and a plus-five rating.

His lone goal came off an extended breakout during the Crimson’s third power play just over five minutes into the second period. The reigning NCAA goal-scoring champ maneuvered around one Big Green defender at the blue line with speed before finding an opening around another near the left circle for Harvard’s fourth goal of the game.

With Vesey’s goal, the Crimson’s power play finished the night three-for-three, and it operated with ruthless efficiency. The three-goal performance matches the Harvard power play’s output last week in an exhibition against New Brunswick, in which the Crimson went up a man eight times.

“We didn’t run that breakout last weekend because we knew [Dartmouth] would get the video from New Brunswick,” Vesey said. “It caught them off guard a little bit, and I really like that breakout. I get the puck with so much speed.”

The rout began innocently enough with a wristshot from the left point by freshman Jacob Olson, who threaded his first career goal over the glove of Dartmouth senior goaltender James Kruger at 7:05 in the first period.

From there, things unraveled for the Big Green. On the next shift, co-captain Kyle Criscuolo drew a slashing penalty to senior defenseman Ryan Bullock on a breakaway to set up a power-play goal by Tyler Moy at 7:51. Just over three minutes later, junior Luke Esposito connected on a feed from classmate Sean Malone for a second power-play goal. 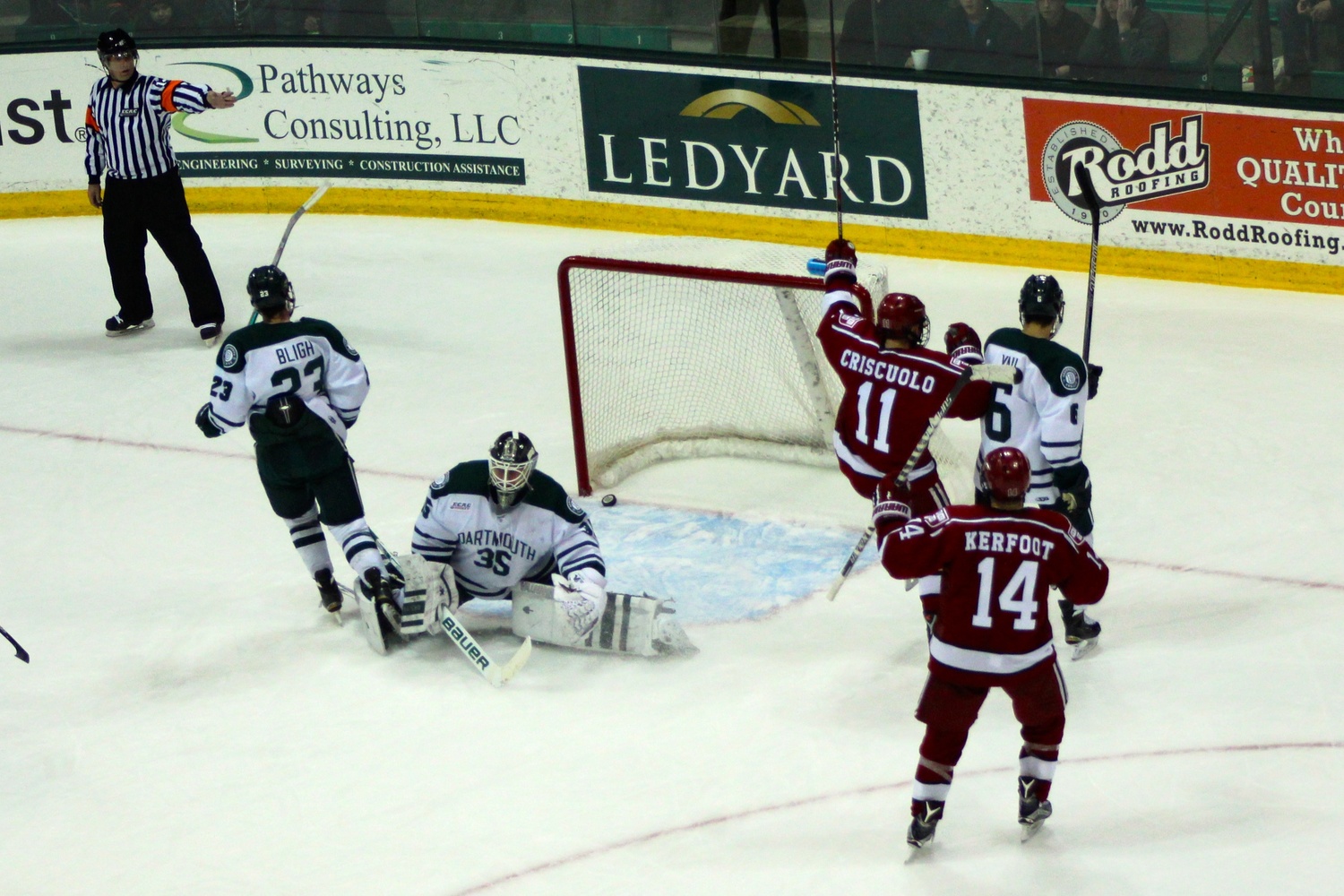 In the second period, Vesey dazzled with his coast-to-coast strike on the power play. He followed the score with a light saucer feed to Criscuolo at 10:14 for Harvard’s fifth goal. Minutes later, Blackwell, skating on the second line with Malone and freshman Ryan Donato, rang a shot off the inside of the post and in for the sixth. Vesey set up Kerfoot on a 2-on-1 early in the third for the seventh.

The 6’5” Madsen displayed confidence in the crease, making timely saves and controlling rebounds throughout the game. His biggest save came midway through the first period on a shorthanded breakaway by Dartmouth’s Tim O’Brien, who could have made the game 2-1.

The performance may add clarity to the Crimson’s starting goaltender situation, which coach Ted Donato ’91 has described as a three-way competition between Madsen, freshman Michael Lackey, and senior Peter Traber.

“It feels great to get the first win under your belt, and there’s not really a much better way to do it,” Madsen said. “I thought our guys were superb and made it really easy for me, and now it’s time to get focused for tomorrow.”

Harvard will host Dartmouth on the tail end of a home-and-home tomorrow night at the Bright-Landry Hockey Center in Allston.