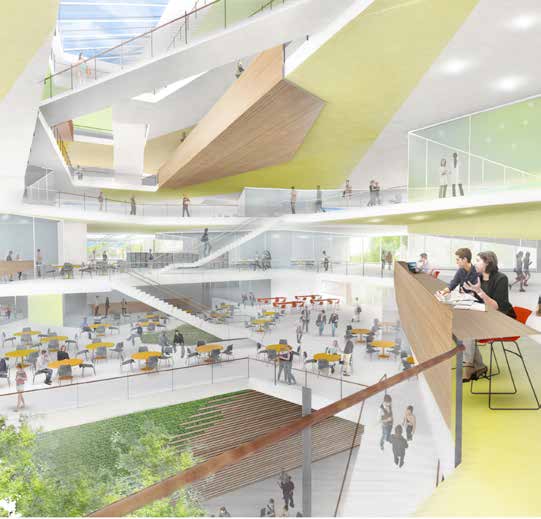 A rendering of the new School of Engineering and Applied Sciences complex's planned interior atrium, which will have access to Western Avenue.
By Luca F. Schroeder, Crimson Staff Writer

Harvard started a formal review process for the construction project of its new School of Engineering and Applied Sciences complex, filing an Institutional Master Plan Notification Form with the Boston Redevelopment Authority on Monday.

The filing represents the latest development in the SEAS’s partial move to Allston, where two-thirds of SEAS faculty are expected to relocate as early as 2020. Many details in the plan reflect months-long discussions held between Harvard representatives, members of the Harvard-Allston Task Force, and the Allston Construction Mitigation Subcommittee.

A rendering of the new School of Engineering and Applied Sciences complex's planned interior atrium, which will have access to Western Avenue. By Courtesy of Behnisch Architekten

Following a thirty-day public comment period on the new filing, the BRA will release a document asking Harvard to clarify its plans and address issues raised by Boston officials and residents. Harvard then could amend and resubmit its master plan for approval. Construction on the project is slated to begin in the summer of 2016.

The planned complex has a tumultuous history: It was originally approved in 2007 to house the Harvard Stem Cell Institute and the Department of Stem Cell and Regenerative Biology, but construction halted in the wake of the 2008 financial crisis, leaving the site vacant and fenced-off.

In 2012, Harvard announced that it would resume development on the project by 2014, and now it is a focus of the University’s ongoing $6.5 billion capital campaign.

But the current project is markedly different than the original plan. The complex will now primarily house SEAS and will consist of one single building rather than four smaller buildings. Additionally, the complex’s projected square footage has been reduced from 589,000 square feet to 496,850 square feet.

Approximately 19,000 square feet of the facility will be public, including a large interior atrium with access to Western Avenue and first-floor retail and cafeteria facilities. Much of the building’s 209,000 square feet of dedicated laboratory space will be located above a two-story area of the complex, described in the filings as a “glassy ‘pedestal’ space that will infuse Western Avenue with transparency and activity.”

The filing also states that the proposed construction project now includes Harvard’s 114 Western Avenue property, and will have far less parking space than the 2007 project—about 275 spots on-site, compared to the previously planned 500 on- and off-site spots. The building’s new undergraduate and graduate occupants will thus need to rely primarily on Harvard’s shuttle service, biking, or walking for transportation, instead of driving.

Additionally, early last month, the Business School also filed plans with the BRA for a major Allston development project of its own— construction on its new Klarman Hall facility, which will house a 1,000-seat auditorium.