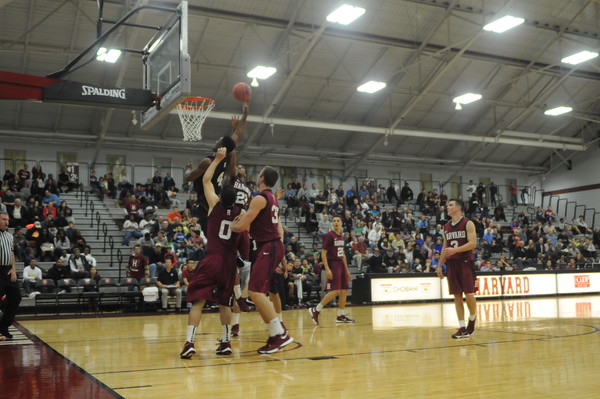 After creating some separation to start the second half, Harvard held off a late McGill comeback for a 66-­63 victory in Saturday’s exhibition game at Lavietes Pavilion. The Crimson was able to capitalize on its size advantage against an undersized McGill frontline. Harvard’s five big men combined for 41 points, with 34 of the team’s points coming in the paint.

With senior point guard Siyani Chambers out for the season, junior forward Zena Edosomwan has been highlighted by teammates as the focal point of Harvard’s offense. It was a tale of two halves for Edosomwan on Saturday.

In the first half, he was a man among boys, dominating in the paint and willing the Crimson to a seven-­point halftime lead with 18 points. After the break, McGill held Edosomwan to just three points on 1-­of-­3 shooting, but the 6’9” junior was able to find teammates on the perimeter and gather four second­ half offensive rebounds.

“One thing for me is just to be more assertive on the glass [with] offensive rebounds,” Edosomwan said. “I think just because I’m getting double teamed shouldn’t stop me from contributing in some way.”

Late in the first half, McGill adjusted its defense and Edosomwan began passing out of double teams. Freshman guard Corey Johnson benefitted the most from the attention inside, going 3­-of­-7 from beyond the arc after the break.

“Having Zena really opens things up for our shooters, not only myself but Corey and Corbin because you know he’s such a threat down low,” said freshman point guard Tommy McCarthy.

“He attracts so many guys that it’s easy to kick it out [for] wide open shots.”

The main question entering the game against McGill and the season in general was how would the team’s guard rotation shake up as Harvard tries to replace starting point guard and senior co­-captain Siyani Chambers. The answer did not become any clearer on Saturday.

Amaker had three different players–McCarthy and juniors Corbin Miller and Matt Fraschilla– run the point. Johnson received the lion’s share of the minutes at shooting guard. Miller, who saw significant minutes last year as the team’s top outside shooter, only played 15 minutes.

Defensively, Harvard’s guards struggled to consistently get stops. They were often caught in mismatches off of switches and the team’s forwards were extended to guard the perimeter. What McGill lacked in front court size, it made up for in backcourt quickness.

“You can see the quickness and the speed, or lack thereof...with our team versus other teams,” Amaker said. “McGill is a team that’s pretty quick on the perimeter. They’re really good with the ball and can make a play off the bounce. That’s areas that we’re not as good at right now.”

Meanwhile, to add to the uncertainty, sophomore guard Andre Chatfield was sidelined due to an injury.

The Harvard guard rotation took its most surprising turn with just over five minutes to go in the game and the Crimson up three. Fraschilla, whose last appearance of more than five minutes came against St. Rose last January, came off the bench to replace McCarthy after the freshman committed his third turnover of the game. The junior did not score but had an assist and, most importantly, zero turnovers.

“I thought [Matt] was a really big difference in us to win that game,” Amaker said. “I thought he made two really good decisions in the short time that he was on the floor.”

The last five minutes of the game were a mere subset of the many looks Amaker tinkered with on Saturday. He started with McCarthy, Johnson, and Okolie. He flanked McCarthy with Miller and Johnson, the team’s best shooters. Miller ran the point for a few possessions while McCarthy played off the ball. When Edosomwan left the game after a hard fall, Amaker went with the team’s three point guards­­Fraschilla, McCarthy, and Miller­­ to finish off McGill.

The tinkering did work, as the team ultimately held on for the victory, but it was not always pretty.

“We were very disjointed at times and we still need to be more efficient just in terms of our offense with shooting the three­point shots. Certainly the foul shooting was disappointing,” Amaker said.­