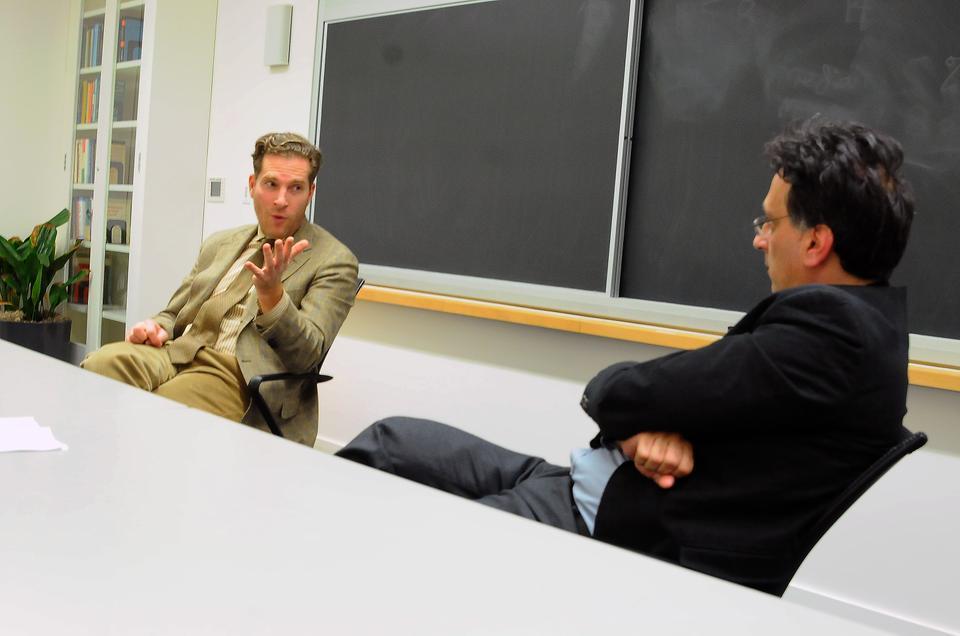 Moderator Roilos Panagiotis watches as Harvard Law School professor Noah Feldman discusses the rise of Salafi Islam among youth in Tunisia on Wednesday. His talk "The Politics of Islamic Cultures in the Wake of the Arab Spring" was sponsored by the Weatherhead Center for International Affairs.
By Andrew M. Duehren, Crimson Staff Writer

Harvard Law School has established a program in Jewish and Israeli law after a gift from hedge fund manager Mitchell R. Julis, a graduate of the Law School and Harvard Business School.

The new initiative, officially titled the Julis-Rabinowitz Program in Jewish and Israeli Law, will offer courses and lectures, conduct reading groups, and host an annual conference.

Noah R. Feldman ’92, a Harvard Law professor who specializes in constitutional studies, will serve as the inaugural director of the program, which will appoint visiting scholars and post-doctoral fellows. Michelle B. Deakin, a Law School spokesperson, did not disclose the amount of Julis’s gift.

“Through their extraordinary generosity, the Julis family has created significant new opportunities for our community to explore this living legal tradition as well as the laws and legal discourse of a nation, which shares the same roots and many new branches,” Dean of the Law School Martha L. Minow said in a statement.

In a statement, Julis pointed to his family’s Jewish heritage and the value of his time at the Law School as his rationale for donating. He named the program after his mother and father and their families.

“I know that Harvard Law School is an ideal place for a full and open and civil discussion of the multiple views and issues in Jewish and Israeli law,” Julis said in the statement.

The gift comes as the Law School begins the public phase of its $305 million capital campaign, which is prioritizing funding for student financial aid and clinical education. Starting only a few years after its last major fundraising drive, the Law School has set a lower goal than its last campaign and altered its fundraising strategies. The Law School had already rasied $241 million raised by the campaign’s public launch on Oct. 23.