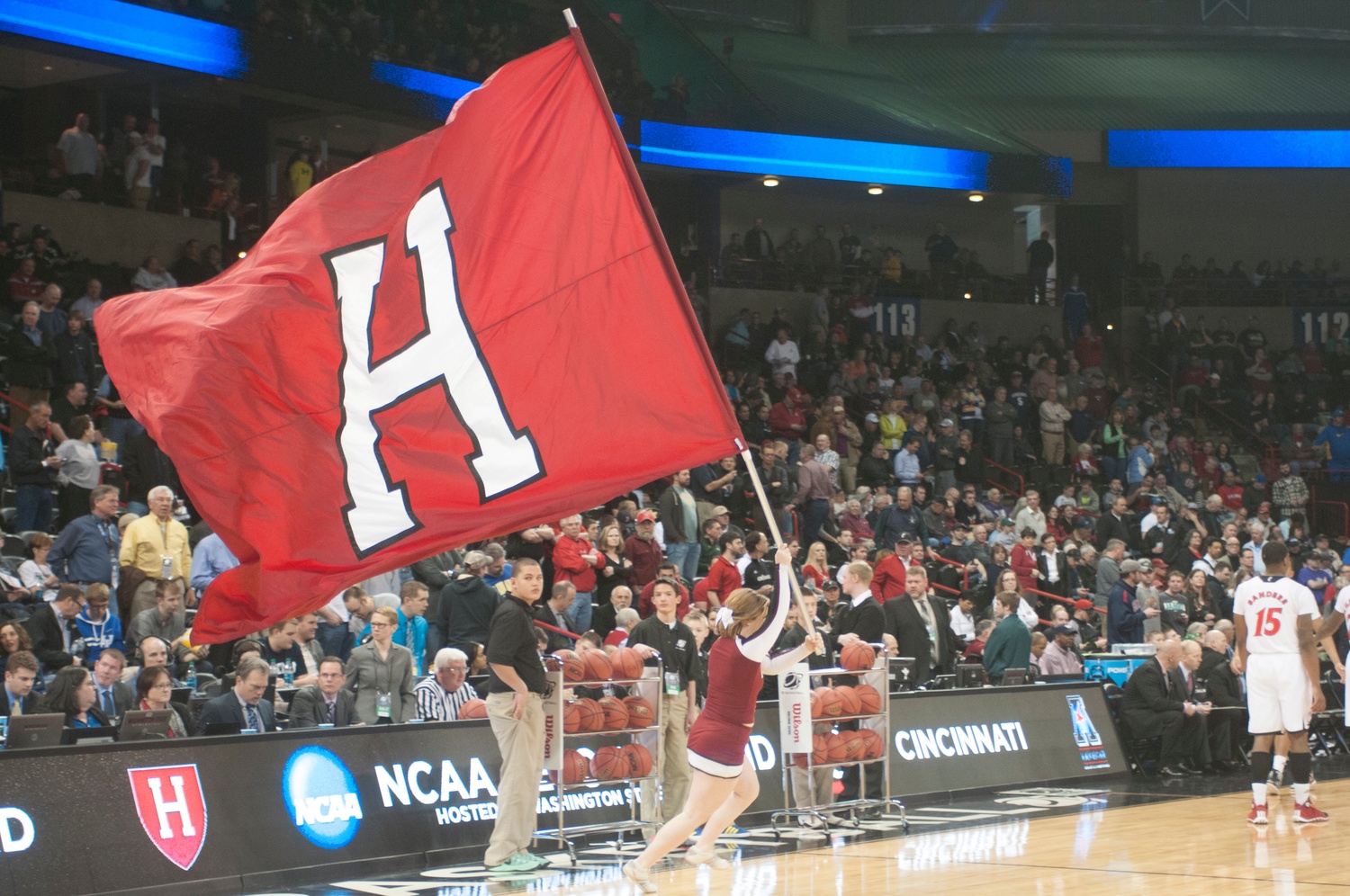 The Crimson have a steep road ahead if it is to replicate its success and return to its fifth straight NCAA Tournament. By Robert F Worley
By David Freed, Crimson Staff Writer

­In an offseason dominated by ominous headlines, recruiting was a positive footnote for the Harvard men’s basketball team. The commitments of four-star recruits Robert Baker Jr. and Bryce Aiken vaulted the Crimson’s 2020 recruiting class into the top 10, a historic finish if it holds up. Of the seven teams currently ahead of Harvard, four have made a Final Four over the last two years.

For years, Harvard coach Tommy Amaker has lapped the rest of the Ivy League field in recruiting. Since Amaker’s arrival, Harvard has nabbed 13 four-star recruits—the rest of the league has three combined. The incoming Class of 2020 has six three- or four-star freshmen. As of now, that’s six more than the field.

The gap off the court hardly narrows on the hardwood—in March, the team clinched its fifth straight conference championship, its fourth straight trip to the Dance, and the unofficial title of dynasty.

When a would-be buzzer-beater rolled off the rim, Cinderella left early for the first time in three years, however, starting an offseason of turnover. Four members of the eight-man rotation, including two first-team All-Ivy talents in Steve Moundou-Missi and Wesley Saunders, graduated in May. Three months later, starting point guard Siyani Chambers tore his ACL in practice; by early September he had left campus, taking a leave of absence to preserve his eligibility.

The occupants of the throne are hardly recognizable. Of the players that return, just two averaged at least 20 minutes a game last year. Combined, the team’s six upperclassmen produced 19.2 points, 11.1 rebounds, and 2.4 assists a game last year. Saunders had 16.6, 6.1, and 4.3 by himself.

“[This year], it’s going to have to come from everyone,” co-captain Evan Cummins said. “It’s not going be one guy or one specific thing.”

Chambers’ absence looms largest. Recruiting has defined the team’s ability to reload on the fly. For years, Amaker has handpicked his starter’s replacements years in advance—squint at sophomores Andre Chatfield and Chris Egi and you can see the makings of the next Saunders and Moundou-Missi. Yet, for two years, Chambers’ replacement never arrived. Of the three non-freshmen guards on the roster, two—Chatfield and junior Corbin Miller—are more shotmakers than shot creators. Junior Matt Fraschilla, generously listed at 5’11”, has three career field goals in two years.

Freshman Tommy McCarthy, a three-star recruit from California, may be what the team needs. McCarthy broke down Fraschilla off the dribble at will during the team’s public preseason scrimmage and flashed the precocious vision that teammates and coaches ascribe to Chambers. He was not expected to start his freshman year, but neither was Chambers—in both cases, a leave of absence from the incumbent opened a door for the rookie.

McCarthy’s performance has already turned heads. While Amaker refused to even name a starting lineup for Saturday’s scrimmage, he admitted McCarthy and fellow freshman Corey Johnson have already played their way into line for minutes when it counts.

“With Tommy and Corey in particular, opportunities are going to be presented quicker than [with] other kids as freshman players,” Amaker noted at the team’s first press conference. However, he quickly qualified his previous statement. “But they have to earn it… that’s big in our program.”

Playing freshmen is rare for Amaker. In the last five years, only Chambers and Laurent Rivard ’14 have cracked the starting lineup. Just two others—Moundou-Missi and Saunders—have averaged even 10 points a game. Yet with as many freshmen as upperclassmen on his roster, Amaker has little time to wait for them to mature.

“We’re as young as we’ve been in quite some time so it’s going to take some time for us to gel,” Amaker said. “It could be an even tougher process [than usual] in that regard for us to find out exactly who we are this year and who we have a chance to become.”

The road to internal resolution has some early speed bumps. A day after opening the season with MIT, Harvard heads to Providence—a No. 6 seed in last year’s tournament. In the eight days that follow, it will take on UMass and Boston College, attempting to assert itself as the best team in the Commonwealth. Three weeks after that is a trip to Lawrence to battle the preseason No. 4 Kansas Jayhawks, looking to acquit itself better than it did during last year’s 49-point humiliation in Charlottesville against Virginia.

Conference play will pose its own set of challenges. The league is substantially deeper than in 2012, when Chambers led a team reeling from the departure of four starters to an unlikely league championship. Yale, the preseason favorite, returns the reigning Ivy League Player of the Year.

Columbia has arguably the league’s most dynamic point guard and power forward in Maodo Lo and Alex Rosenberg, while Princeton’s wing combination of Spencer Weisz and Steven Cook could lead it to an Ancient Eight title. Harvard was picked to finish fourth in the Ivy League preseason poll, its lowest showing since 2009.

Amaker and his team care little for the polls, however. Inside the program, internal standards dominate outside expectations, and the coach claims to only hear media commentary when it comes from his players’ Twitter feeds. To Amaker, regardless of his team’s youth and inexperience, regardless of preseason accolades, regardless of who has left, his team will remain the hunted.

“We are going to get everyone’s best shot,” Amaker said. “That requires us to be as good as we can possible be every day, every night, every game and that’s what we are striving for.”