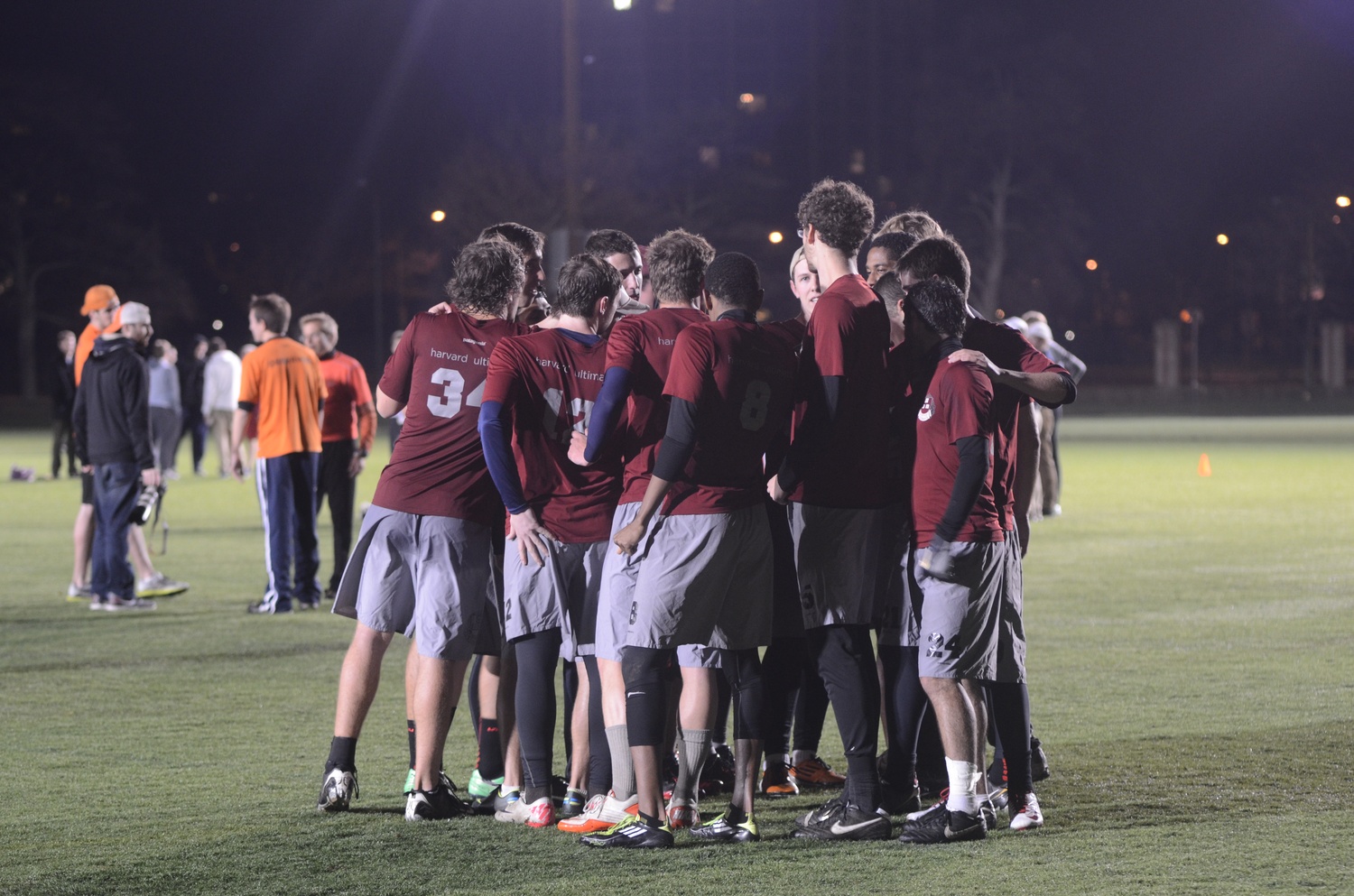 Football is no longer the only sport where you can see a player sprint down the sideline right past the opposition to make a diving catch off of a line-drive toss for the score anymore at Harvard.

Harvard Red Line, the men’s Ultimate Frisbee club team, has used this type of connection to great effect throughout this fall season, one which has developed over the years between co-captain handler Mark Vandenberg and junior co-captain cutter John Stubbs. As a result of the star power these two provide, which complements the addition of newfound depth added by the outstanding play of the team’s younger members, the Red Line has performed up to its own lofty expectations so far this year.

In its first two competitions of the season at Huck a Hunk of Burnin’ Pumpkin in Portsmouth, R.I. and the Classic City Classic in Athens, Ga., the team reached the finals and semifinals, respectively, only to lose to eventual champion, top-ranked University of Massachusetts-Amherst, in both of the tournament matches.

The chemistry between two of the best collegiate players in the country in Vandenberg and Stubbs provides an added element to the squad that many opposing teams are unable to account for. Focusing too much attention on one half of the pair could leave the other one streaking down the sideline without coverage.

“If Mark is the quarterback, John is the star wide receiver,” senior cutter Alex Hem said. “Half the time the offense will start by Mark just immediately hucking it deep to John. And John will just toast his man and make an awesome catch. They’re two really good players who have played a lot together, and it’s sweet to watch.”

Both coming from the same Ultimate Frisbee powerhouse, the Paideia School in Atlanta, and playing for the Boston Ironside on the club circuit, Stubbs and Vandenberg have had ample time together to develop into a force. Their bond has strengthened both on and off the field, and their history together has enabled them to pick up on one another’s tendencies and strategies, resulting in a rapport that is rare and coveted in sports.

“John and I have been friends since we were like six or seven,” Vandenberg said. “I was very happy when he ended up at Harvard because when you play with someone for so long you get a pretty strong sense of the kind of things they like to do and are expecting you to do. Oftentimes it just takes a little nod or hand gesture…for us to know what the other wants.”

Stubbs has a family pedigree when it comes to Ultimate. His older brother, George Stubbs ’11, guided the Red Line to the USA Ultimate College Championships three times in his Crimson career, en route to winning the Callahan (National Player of the Year) Award in his senior season. Meanwhile, his sister India Stubbs ’15, who captained the Harvard women’s team, Quasar, for three years, dominated the women’s side. Frisbee runs in the family and Harvard Ultimate has benefited as a result.

Even though the team is anchored by the play of Vandenberg and Stubbs, the younger players have become productive contributors as well.

With its large freshman class last year, the Red Line was a relatively inexperienced group. However, the vital experience that the team’s young core gained from huge chunks of playing time it received a year ago, in addition to the effort the squad has put in over the recent past has paid dividends this season.

“[Our] sophomores put in a lot of work this summer and it was very clear from their play at both of these tournaments,” Vandenberg said. “[Sophomore cutters] John Rahill and Milan Ravenell stand out as two of those guys, but it was really a top to bottom thing. Our freshmen also were able to step into important roles, which we certainly were not expecting this quickly.”

The team’s upperclassmen leaders have developed a culture of accountability and work ethic in an attempt to bring the squad to new heights and allow new members to more easily adjust to its system. Red Line looks to build a program that will continue to play for years to come, even after the likes of Vandenberg and Stubbs move to higher levels of competition upon their graduation.

Despite its status as a club squad, the Ultimate Frisbee team does not just stand around tossing Frisbees back and forth when practicing, as one might imagine. Practice is by no mean casual, as it may be for other club sports across campus. This semester, especially, the team has placed an emphasis on fundamentals and strength training.

“We’re putting in a lot of work this fall, especially in terms of our fitness, which has taken a step to another level,” Hem said. “We’re working with a varsity trainer this year…and I think that’s given us not only a competitive edge in terms of increased skill and speed, but it’s giving us a lot of confidence going in as well.”

Yet the question remains: How far can this squad go, and can Stubbs help bring the Red Line to nationals as his older brother, George, did before him?

For Hem, the culture of success for Ultimate at Harvard lends an easy answer.

“We feel as if we have a good shot [at nationals] and a lot of potential,” Hem said. “We’re all really excited about putting in the work over the next few months that will help put us in a good spot.”