Harvard-Yale Rivalry Goes Beyond the Game 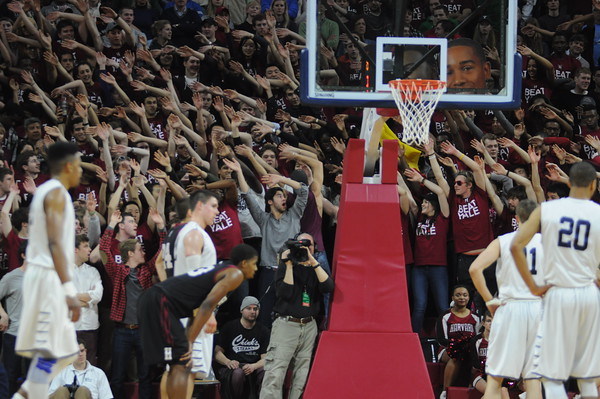 Harvard-Yale contests typically garner huge crowds compared to other games for Crimson athletics, even beyond football. Harvard fans came out in force at the 2015 Ivy League Men's Basketball Playoff between the Crimson and Bulldogs, even though the game was played at Penn. By Robert F Worley
By Sam O.M. Christenfeld, Crimson Staff Writer

­In 1916, minutes before taking the field, Yale football coach Thomas Albert Dwight “Tad” Jones told his team, “Gentlemen, you are now going to play football against Harvard. Never again in your whole life will you do anything so important.”

Hyperbole aside, his words still capture the sense of significance that one matchup each year bears for the Crimson and the Bulldogs. The Game brings with it a feeling of importance and tradition that inspires players to on-the-field heroics and elevates the energy and turnout of the students in the stands.

At the heart of the excitement and drama lies a rivalry that stretches back a century and a half. Although football may be the most salient part of this competition, the rivalry is a tradition between the two Ancient Eight schools that runs deeper than the gridiron.

The rivalry between Harvard and Yale runs all the way back to the inception of intercollegiate sports in the United States.

In 1843, Yale founded its own boat club, the first in the country. A year later, Harvard did the same.

The two teams practiced on their own until 1852, when the Bulldogs issued a challenge to the boat club in Cambridge.

The crews met on Lake Winnipesaukee in New Hampshire for a two-mile race, the country’s first intercollegiate sporting competition. The Crimson crew emerged victorious, and the Harvard and Yale rowing teams would continue to race one another for more than 150 years, establishing not only a rivalry between the two colleges, but also college sports in the United States.

Although many universities had sports teams in those days, none of them competed against one another until the Crimson and the Bulldogs raced on Lake Winnipesaukee. Harvard and Yale’s first boat race inspired other institutions of higher learning to face off athletically, and the two schools played leading roles in the development of college sports themselves. Between them, the Crimson and the Bulldogs participated in the country’s first intercollegiate games of hockey, soccer, and five-on-five basketball.

Today, with the tradition of intercollegiate athletics well established, Harvard and Yale meet annually to carry on the rivalry established in 1852, not only on the football field and on the water, but also in almost all of the Crimson’s 42 varsity sports.

For many of Harvard’s teams, the contest against the Bulldogs is the biggest of the year. This was arguably true for the 2014-2015 men’s ice hockey team. The Crimson met Yale on the ice three times in the first half of last season and came away with the same number of losses. However, the teams squared off again in the best-of-three ECAC playoffs, and Harvard took the first game. The Bulldogs clawed back to win the second contest, but a double overtime goal from junior forward Jimmy Vesey lifted the Crimson to a dramatic victory in the third and propelled Harvard towards the ECAC championship.

“It’s definitely [one of] the most memorable games of hockey that I’ve ever played in,” Crimson co-captain Kyle Criscuolo said. “Those games are something that I’ll talk about for the rest of my life. I think the emotions in that locker room after the [last quarterfinal] game were probably similar to the ones after winning the championship.”

According to Criscuolo, the team’s satisfaction in the win stemmed perhaps more from snapping a 10-game losing streak against Yale than from advancing to the next round of the tournament.

Although the hockey situation of March 2015 was a particularly notable result, games against the Bulldogs bring similar levels of excitement for many of Harvard’s other varsity teams.

Part of the thrill comes from the boost that teams get in numbers of spectators when they take on Yale. Harvard women’s basketball’s win over the Bulldogs at Lavietes Pavilion last year drew nearly twice as many spectators as any of the team’s other games, while the women’s volleyball squad saw 100 more people turn out to the Malkin Athletic Center for its home matchup against the Ivy League foe this season than for any of its other regular season contests.

“Whenever it’s our Yale game, we get more fans that come out just because of the long history of the rivalry,” women’s volleyball co-captain Caroline Holte said. “That makes the game that much more exciting to play in.”

The unusually large crowds of fans help to make games against Yale notably electrifying, but traditions within Harvard teams may do even more to build excitement for contests against the Bulldogs.

Building on the buzz of playing in front of a full house, veteran Crimson players often fan the flames of the rivalry to ensure that younger players compete especially fiercely against Yale.

“My freshman year, I was immediately brainwashed into hating Yale,” Holte said. “Right at the beginning of the preseason, we were told that Yale is our enemy. It’s sort of just ingrained in you, and you don’t really know why, but they’re always your enemy.”

The practice of portraying Yale as a primary enemy to new players is common among Harvard teams. Casting the Bulldogs as hated opponents is useful as motivation during hard training and can create a common purpose for a squad.

This habit of building up antagonism towards Yale among freshmen players helps to explain the notable fierceness of a rivalry that has endured for more than a century and a half.

Although the Harvard rowers from 1852 would not even recognize many of the sports in which the Crimson and the Bulldogs compete today, they would likely find that they share something with their modern counterparts—an overwhelming desire to defeat Yale.

“When you step on the court against Yale, there’s a feeling that you want to beat them more than anyone else, purely because of the fact that they’re Yale,” Holte said. “This is a long-lasting rivalry, and it’s something that we take really seriously. Any time we can take them down, it’s just immediately sweeter.”