Nicky Maxwell, a College freshman, will become the first NCAA-certified athlete in track and field history to compete with a prosthetic running device when he makes his debut for the Harvard men’s team in January.

The NCAA Rules Committee approved a request from Harvard in June to allow Maxwell to compete with the device, determining that it would not provide the freshman with a competitive advantage over his opponents. Maxwell’s case will be reevaluated each year, but he will be eligible to run for the entirety of this season and will have the ability to qualify for the NCAA Championships.

While the decision was looming, Maxwell spent the summer in the spotlight of the NCAA Rules Committee as a sprinter. Just months later, the freshman was commanding the spotlight on the dance floor of Annenberg Hall as a surfer.

Stop to chat with him at the Halloween dance in a decorated “Haunted Hall,” and he would have gestured to his amputated leg and explained with a cheeky grin and a smooth British accent that he lost it in a gory shark attack.

Yet his prosthetic was not just part of a particularly realistic Halloween costume. Maxwell had his leg amputated when he was 15 months old due to fibular hemimelia, a condition that involves the shortening or complete lack of the fibula, or calf bone.

“I like to have a bit of fun with it, I don’t see much point in taking it too seriously,” the London native says. “I was lucky enough to have a family whereby it wasn’t like they were keen on it not being an issue—they just never treated it as an issue. I never felt at all that there was anything that different about me.”

With the encouragement of his parents, Maxwell began his athletic career at a young age. Growing up, he was an active rugby player until he suffered a series of knee injuries around 2010. After his doctors told him that continuing to play rugby would only cause further injury, he found himself without an outlet for sport for the first time in his life.

“I sat around and tried to figure out what I would do,” Maxwell said. “This was right after 2008 Paralympics in Beijing, which was the first time I saw Para-athletics properly. Running seemed kind of a natural way to follow that up.”

Under the guidance of experienced coaches, Maxwell turned his attention to sprinting. During his high school career, he competed for the Wellington and Bracknell Athletic Club in the 100, 200, 400, and 6x100 meter events.

Around the same time, Maxwell began considering his college plans. Remaining in England was an option, but despite the existing structural support there—Team Great Britain ranks second on the all-time Paralympic Games medal table—Maxwell was drawn to studying in the United States and receiving a more well-rounded education. 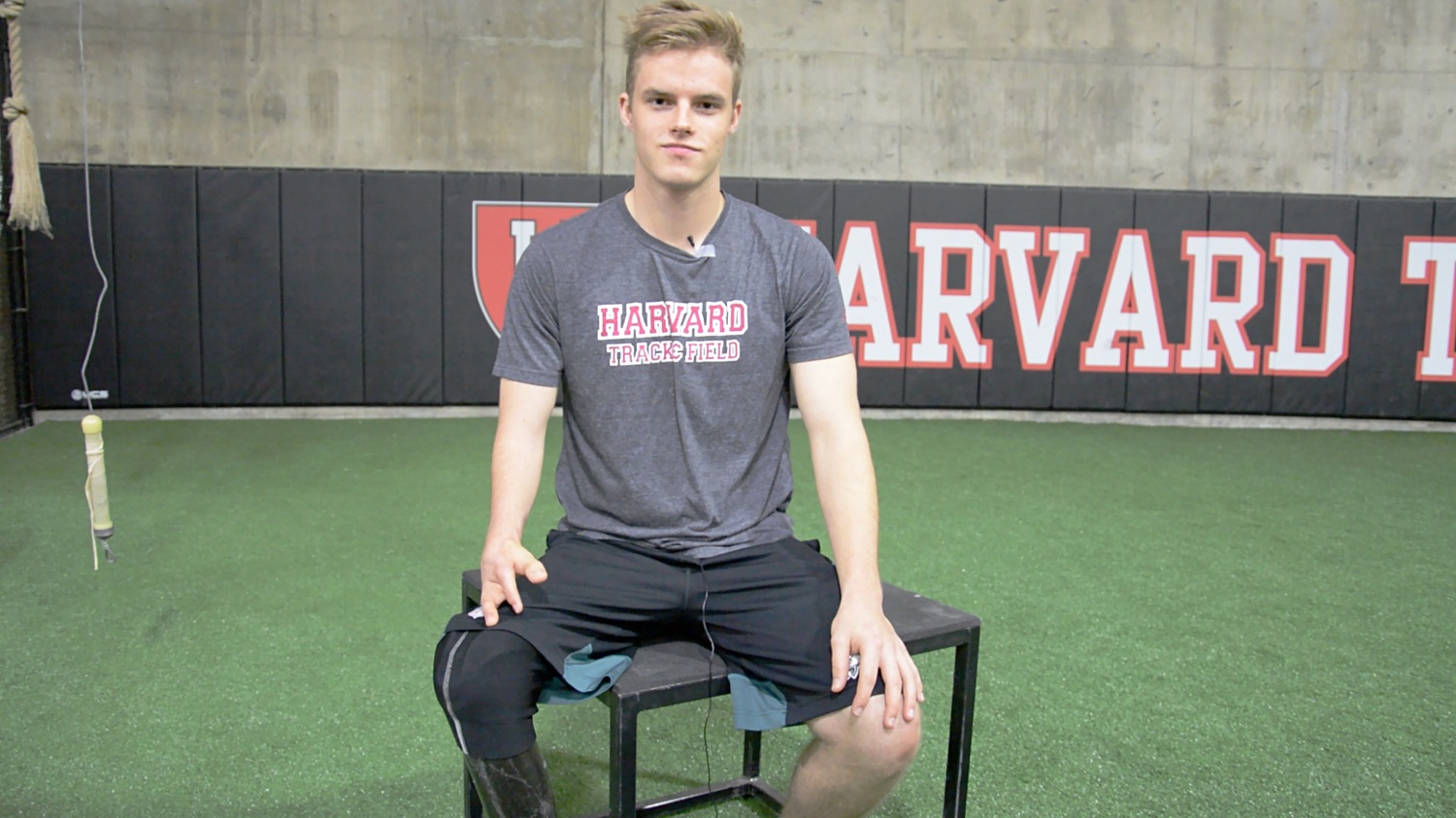 Ask sprinter Nicky Maxwell '19 about his prosthetic device, and he will tell you that he "likes to have a little fun with it." By Isabella S. Beroutsos and Eliza R. Pugh

“I was interested in the balance between athletics and academics. The U.S., and particularly somewhere like Harvard, is really unmatched in doing that,” he explained. “My other choice was Oxford, and as much as I wanted to go there, they just don’t support athletics in the same way…. The concept of a student-athlete is very foreign.”

That is how Maxwell found himself at Harvard men’s sprints coach Marc Mangiacotti’s door last summer, in hopes of pursuing both academic excellence and racing.

“I explained who I was, and totally on a hoof he took me around for an hour and showed me around campus and told me about what opportunities we had here at Harvard,” Maxwell recalled. “Coach Mang is a huge part of the reason why I came to Harvard.”

Despite never having worked with a Paralympian before, Mangiacotti has a personal connection to the Paralympics that led him to be particularly open to working with Maxwell.

“My willingness to meet with Nicky comes from a friend of mine, Joe LeMar, who was a Paralympic gold medalist and former world record holder in the 400 and 800,” he explained.

One of Mangiacotti’s best friends from high school, LeMar had his foot amputated during his senior year, not long after winning the state championships in track and field. He then went on to compete in the Paralympics, winning the 400-meter event in the summer of 1992.

“I think that relationship I have with Joe opened up the door for Nicky to have a conversation with me,” Mangiacotti said. “And the main goal of my conversation with Nicky while I was showing him around the facility was to find out if he had a championship mentality.”

While Maxwell’s times indicated that he would be more competitive in Paralympic races than he would at NCAA championship events, Maxwell’s “championship mentality” sealed the deal for Mangiacotti.

Although Maxwell is the first Paralympic athlete Mangiacotti has worked with, the fourth-year coach says that the freshman’s transition to college athletics has been smooth and that having Maxwell on the roster makes the Crimson a better team.

“We have very good conversations about things he’s tried in the past and what has worked and hasn’t, so we do have to make some modification,” Mangiacotti said. “But I think that people would be surprised that he can do everything that other people can do, just with small modifications.”

“Whether it’s lifting weights, or whether I have a bag of different hand aids or straps that I’d use as I was going through different sports, or becoming a better athlete, I’ve realized that if I need to do this exercise, I just need to adapt it and find a way to make it work,” Maxwell explained. “There’s really very little stuff that you can’t do.”

The NCAA’s ruling to allow Maxwell to compete—considered an interpretation of an existing rule—is far from a solidified precedent for Paralympians and runners with prosthetics. The question of whether athletes with prosthetics can compete against able-bodied athletes remains controversial in the track and field community for fear of some athletes gaining an unfair advantage. The current decision makes clear that future cases will be decided on an individual basis.

Yet Maxwell’s case still represents a step towards increasing the number of Paralympians in the NCAA, and it offers a glimmer of hope for athletes with disabilities who aspire to play at the collegiate level.

“[The ruling] is something I’ve been pretty naïve to, and I’m only starting to realize its significance,” he explains. “I’m hopeful that as a result, it can start having Para-athletics be a significant part of what the NCAA wants to do in competition.”

And for Maxwell, his hope is that some day he will enter the world of professional athletics.

“Honestly, my ambition is that I would like to be a professional athlete,” he says. “I will find out in the next couple of years whether I have a realistic opportunity to do that. If that is the case, I would love to pursue that with everything I have.”

“One thing that I will emphasize is that I’m not the next big thing in Para-athletics,” he says modestly. “I love my sport, I love competing, but at least right now I’m not running times that suggest I’ll break a world record or anything.”

For now, he is enjoying his time as a student at Harvard, writing for Satire V, training for competitions this winter, and convincing people at parties that he lost his leg in a shark attack.

—Staff writer Jamie Chen can be reached at jamiechen@college.harvard.edu.