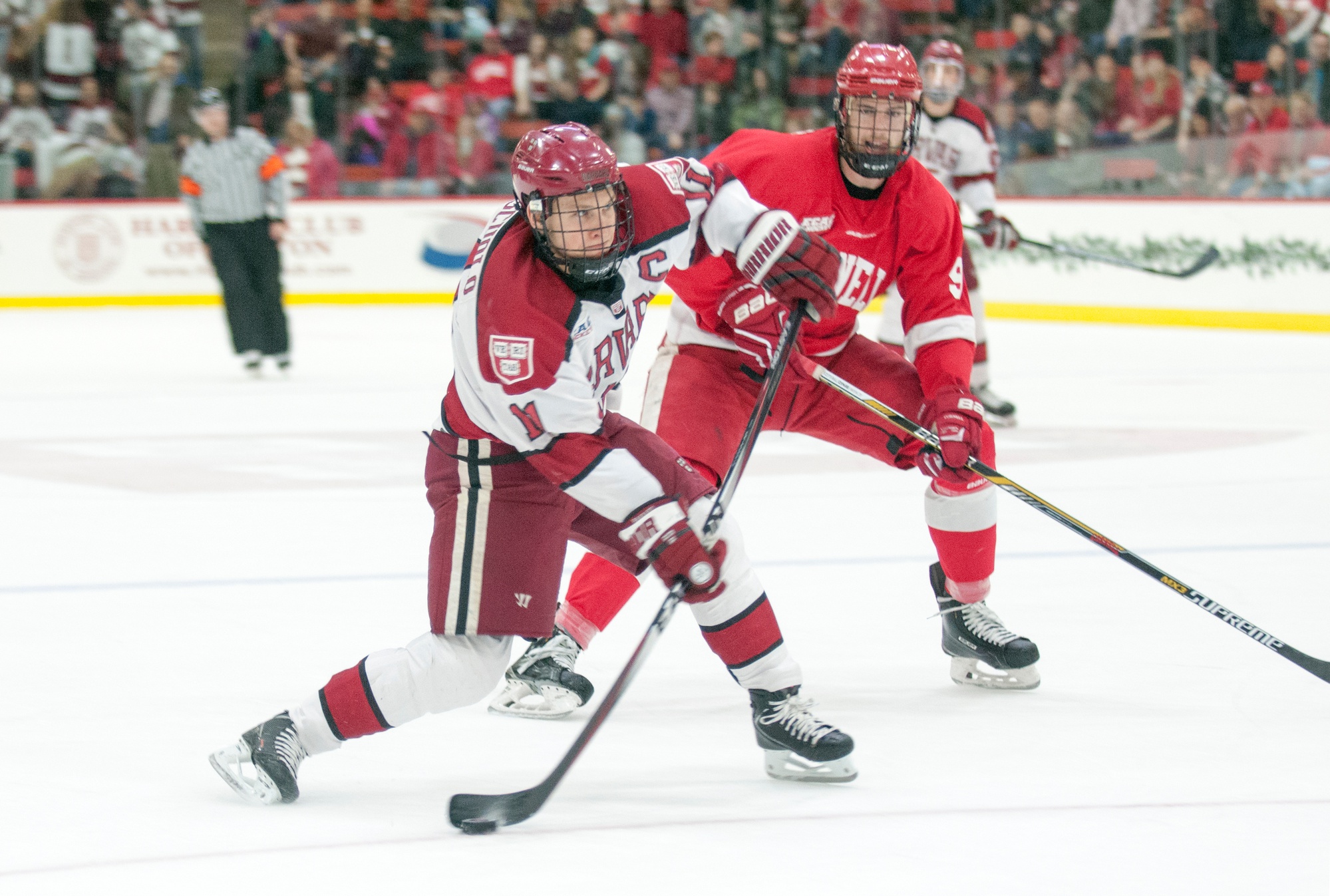 For Big Red associate head coach Ben Syer, it was a “resilient” effort. For Harvard coach Ted Donato ’91, it was a “frustrating” affair.

In the end, Saturday evening’s tie at the Bright-Landry Hockey Center felt like another Ivy League rivalry game of years past. The odds and stakes may have been higher at the Yale Bowl in November 1968, but on Valentine’s Day 2015, the Cornell men’s ice hockey team beat the Crimson, 3-3.

Third-line sophomore Jeff Kubiak and fourth-line freshman Jared Fiegl scored their first goals of the season to erase two Harvard leads in the final frame of regulation. Led by a goal and two assists from junior left wing Jimmy Vesey, the Crimson first line scored three times, but No. 14/13 Harvard (13-8-3, 9-6-3 ECAC) left the ice unsatisfied with the draw.

“We’re disappointed and frustrated,” Donato said. “We should have protected [our leads].... We didn’t pick up sticks going back, and we need to find a way to get two points.”

Moments after Vesey scored his 19th goal of the season to give the Crimson a 3-2 lead with 5:02 left in regulation, the Big Red (10-11-4, 8-8-2) found an answer from an unlikely source. Fiegl put back a rebound in the slot from junior linemate Teemu Tiitinen to catch Harvard junior goaltender Steve Michalek (26 saves) out of position.

Both sides had opportunities to win in overtime, including a shot in the high slot by Crimson junior defenseman Desmond Bergin that had Cornell sophomore goaltender Mitch Gillam, who had 35 saves on the night, looking behind himself.

Overall, the win-tie weekend was a positive development for Donato’s team, which entered the weekend on a four-game losing streak. Yet Donato was disappointed with Saturday’s result, which came after a quiet night of officiating and 65 minutes that Harvard largely controlled.

“I think we carried the play for good stretches of the game,” Donato said. “I’m a little bit frustrated in the sense that it turned into a wrestling match more than a hockey game. To find [only] one penalty in the game would be shocking to me.”

To Donato’s surprise, the Crimson did not receive a power play the entire evening despite a physical, clutch-and-grab-style game. Simultaneous Harvard penalties cancelled out each of the Big Red’s two infractions.

“By putting your whistle away, you are impacting the game,” Donato said. “I think that unfortunately the refs just decided to let the game be played.”

The game's lone power play resulted in Cornell's first goal, a left-point strike from top senior center Cole Bardreau in the second period. Bardreau’s goal came with 23 seconds left in a major penalty to Vesey, who had received five minutes for boarding after a high hit on sophomore defenseman Holden Anderson.

With the Big Red up a goal, the hosts’ top line took over. Vesey connected with Kerfoot in the slot to tie the game at 8:17 in the period. Less than three minutes later, junior co-captain Kyle Criscuolo stuffed the puck past Gillam’s right pad to take a 2-1 lead.

“Now that [Kerfoot] is back [on the first line], it’s just a matter of them getting their chemistry back, which I definitely think they are starting to get," said sophomore defenseman Victor Newell, who picked up secondary assists on each of Harvard's second period goals. "[That is] scary for a lot of teams.”

In the third, Kubiak drew the game even at two, beating Michalek from the high slot off a behind-the-goal feed from freshman linemate Dwyer Tschantz. Vesey appeared to put the final punctuation on a back-and-forth third period before Fiegl punched in his first collegiate goal.

Cornell remains a game-and-a-half behind Harvard in an eight-team race for a top-four conference finish and first-round bye in the ECAC Tournament. With four games remaining in the conference regular season, Donato’s goal for the Crimson is the same that it was at the beginning of the season: steady improvement.

“The effort was there,” Donato said. “I think overall this weekend, we made a step forward and there were some positive things. But as we talked about earlier in the season, we have to continue to improve.”

—Staff writer Michael D. Ledecky can be reached at michael.ledecky@thecrimson.com.