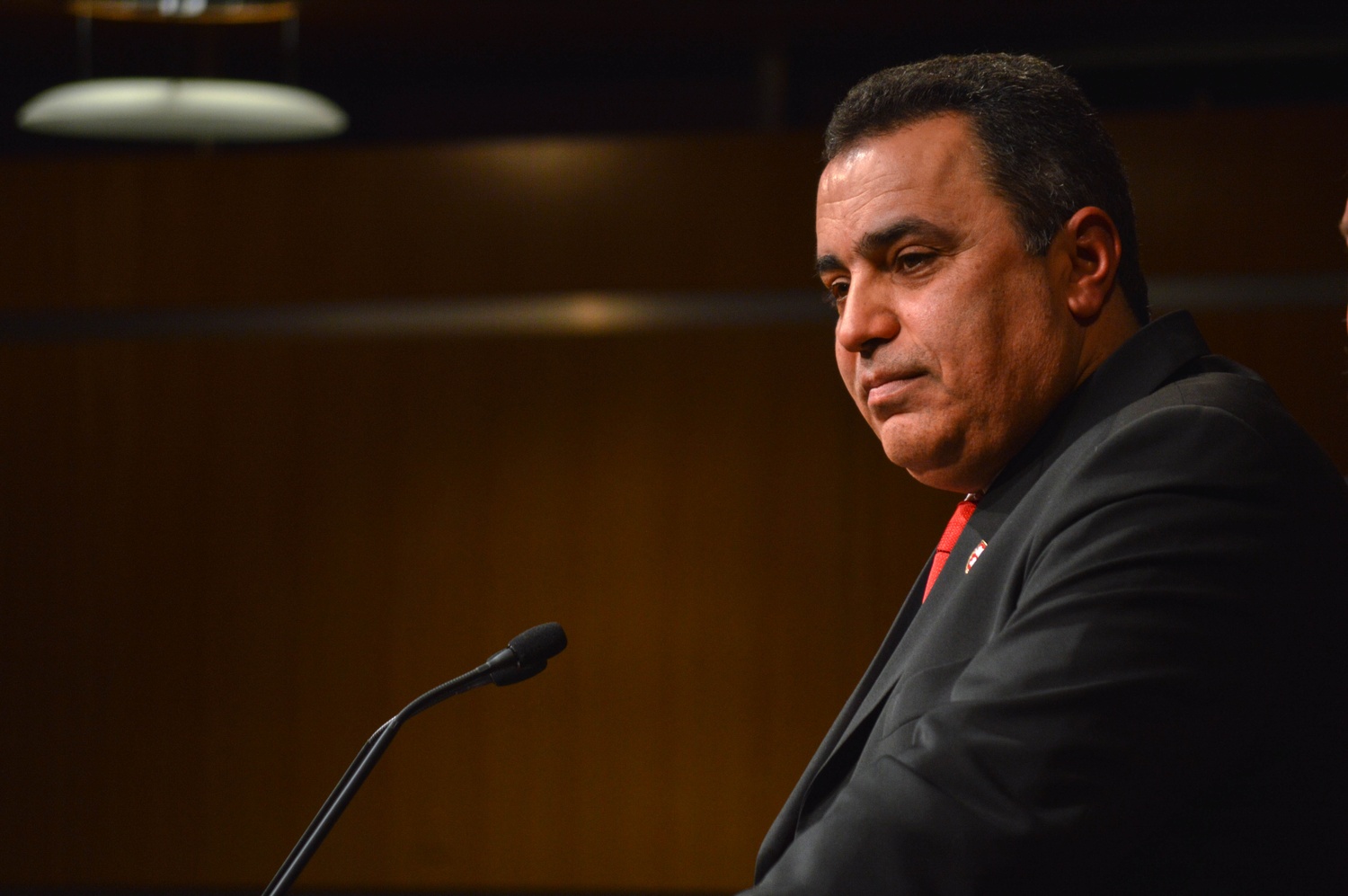 At the John F. Kennedy Jr. Forum, Prime Minister Mehdi Jomaa of Tunisia speaks of change and reform in a young Middle East democracy. One of two heads of state to speak at the JFK Jr. Forum this week, Jomaa fielded questions from the audience after the public address. By Y. Kit Wu
By Luca F. Schroeder, Crimson Staff Writer

Jomaa described the political challenges the North African country has overcome since the start of the Tunisian Revolution, which lasted from mid-December 2010 to mid-January 2011, and the economic tests ahead.

The John F. Kennedy Jr. Forum event, moderated by Kennedy School Dean David T. Ellwood ’75, comes three weeks after the end of Jomaa’s term as interim head of state and a little more than a year after the ratification of Tunisia’s new constitution in 2014. Ellwood highlighted that Tunisia, though “fragile,” seems to be a “bright spot” in comparison with some of the less successful political situations that emerged out of the Arab Spring.

Jomaa said the Tunisian Revolution was driven largely by the desire of the country’s youth for more freedom and economic opportunities and owed its success at least in part to social media.

“The tool of the revolution was mainly Facebook since there was no freedom of expression in the media,” he said.

Jomaa added that the revolution’s rapid success in overturning the previous regime was “like a dream,” and that, though there were casualties, the country paid a “reduced price” for its freedom compared to some of the more violent revolutions of the past. But the quick overturn in government, according to Jomaa, did not by itself ameliorate or solve any of the underlying socioeconomic problems that had caused the revolution in the first place.

“The dream was that since we succeeded with the revolution, we will succeed quickly to solve other problems—but we forget that in a revolution we make the problems more complex,” he said.

One particular problem that the country faced in the wake of the revolution was a security crisis caused by the divide between its security staff—seen as the tool of the previous repressive regime—and its citizenry.

The new government eventually restored the confidence and the trust between those two groups, Jomaa said, using an “approach of dialogue” that was instrumental in preserving order and ensuring a legitimate transfer of power. Moreover, Jomaa said that this spirit of compromise must be preserved for the country to undergo the economic reforms needed to guarantee its continued success.

Jomaa called Tunisia a potential “hub for the future,” citing the country’s geography at the crossroads of Europe, the Middle East, and North Africa.

“I like to say that Tunisia is like a start-up,” Jomaa concluded. “It’s small today, it’s risky, but it has a big leverage...a leverage in democracy, a leverage of the peace [of the world].”