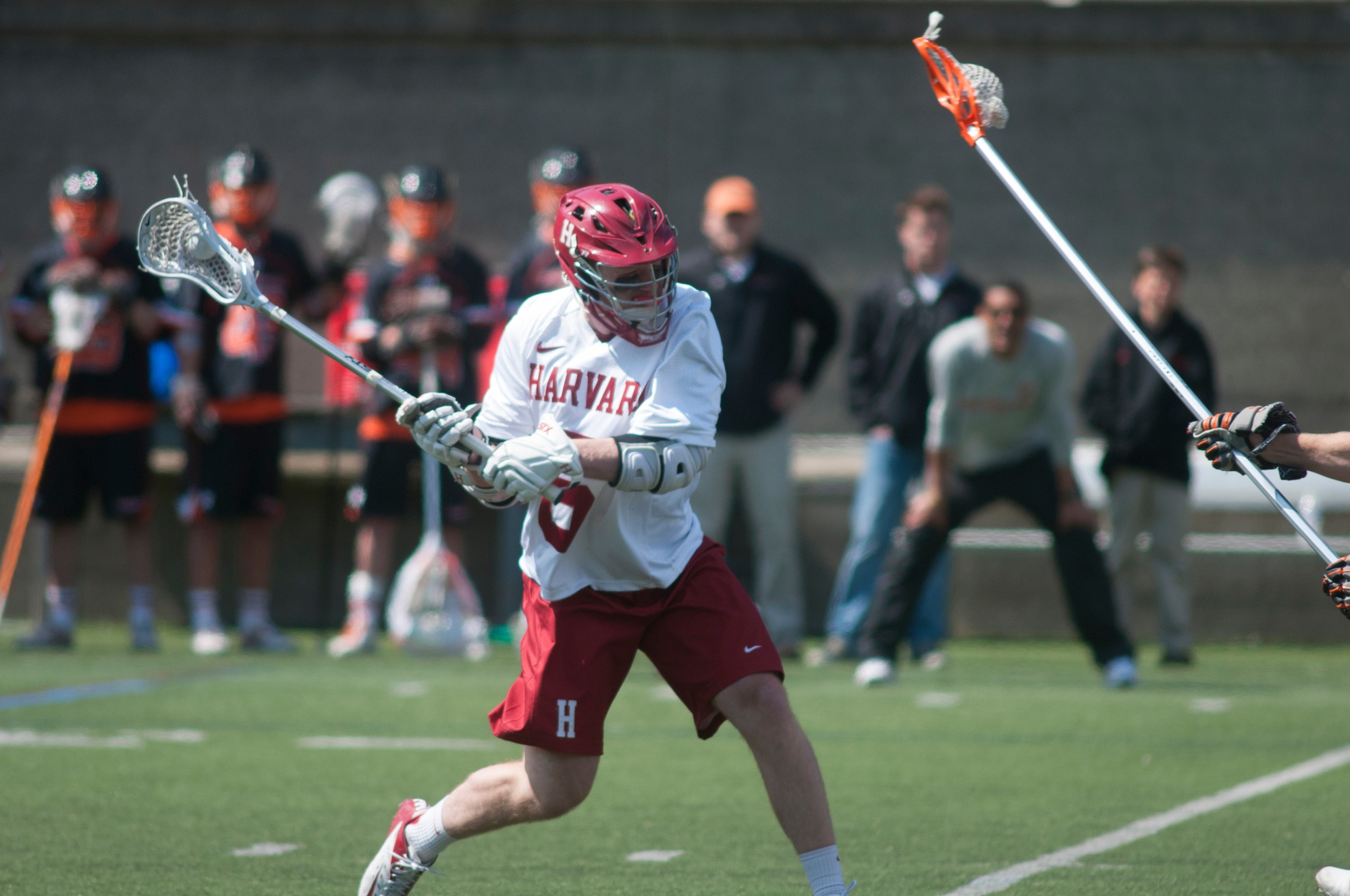 Junior midfielder Sean McDonagh, shown here in previous action, registered a shot on goal against No. 19/18 Brown, but the Crimson's offensive effort was not enough to tame the Bears
By Phil Delamater, Crimson Staff Writer

In a matchup of two of the nation’s top offenses in men’s lacrosse, only one team continued its prolific start to the season on Saturday. No. 19/18 Brown (5-0, 1-0 Ivy) again lit up the scoreboard, as the Bears tallied nine goals in the second half alone en route to a 14-9 victory over the visiting No. 10/13 Crimson (4-2, 0-1 Ivy) at Stevenson Field.

While Harvard went into halftime with a slim 6-5 advantage, Brown used a 3-1 third quarter to take a one-goal lead into the final frame. The Bears left no doubt about their scoring prowess with an explosive fourth quarter, which included a couple insurance goals late as Brown capitalized on Harvard’s need to press to win back possession with time winding down. The Bears scored four goals in the last 4:11 to turn a slim 10-8 margin into a comfortable victory.

On a day in Providence with foul weather, Harvard’s inability to produce sustained possessions ultimately proved the difference. The Crimson badly lost the face-off and ground ball battles with the game on the line in the final 15 minutes. Going 1-9 at the X and controlling just five ground balls to Brown’s 13 in the fourth quarter, Harvard allowed the Bears to control the game late, and the Crimson defense could not hold off the scoring juggernaut given the disparity in possession.

“Brown outplayed us, really, in the middle of the field on ground balls, which is disappointing,” said Harvard coach Chris Wojcik'96. “I thought their poles were really good off the ground, especially between the lines and off the face-offs, so...I think that was the big difference.”

Harvard also far surpassed its previous season high with 26 turnovers on Saturday, 17 of which came in the first half when the Crimson appeared ready to break open the contest. Harvard built a two-goal lead on three separate occasions in the half, including at the outset of the game. However, on all three occasions, turnovers prevented the Crimson from building on its advantage and led directly to goals for the Bears.

“Their offense benefits from their transition game,” junior co-captain Stephen Jahelka said. “They capitalized on our offensive turnovers and were able to turn stops into transition offense on the other end of the field, which ultimately resulted in goals.”

Both of junior attackman Kylor Bellistri’s tallies for Brown came in the final minutes of the first half off of Harvard giveaways. He notched his second score with just seconds left in the second quarter to bring Brown within one and give the Bears momentum heading into the break.

Brown carried that momentum into the second half, scoring less than two minutes into the third quarter. While the Crimson answered with a goal from junior midfielder Ian Ardrey to bring the score to 7-6 to notch its first lead of the game, the hosts finished the contest on an 8-2 run that saw seven different Bears find the net.

If not for the heroics of junior Bryan Moore in cage, Brown may have exceeded its Division I-best scoring average on Saturday. The Bears outshot Harvard 31 to 14 in the second half, matching the Crimson’s shot total for the entire game in the final 30 minutes. Moore had to make a career-high 17 saves just to hold Brown to 14 goals, less than five below the Bears’ 18.5 per game entering the contest.

A positive for the Crimson was the continued success of freshman midfielder Joe Lang. The reigning Ivy League Rookie of the Week turned in another great game, scoring or assisting on five of Harvard’s six first half goals, including the team’s first four of the contest. Although he didn’t record a point in the second half, Lang led the Crimson with three goals and two assists and now stands as Harvard’s second-leading scorer heading into its tilt with No. 2 North Carolina in Chapel Hill on Tuesday.