Point Guards and Playmakers: Chambers and Paige a Familiar Matchup

After facing each other in grade school, Harvard's Siyani Chambers and North Carolina's Marcus Paige stare down once more 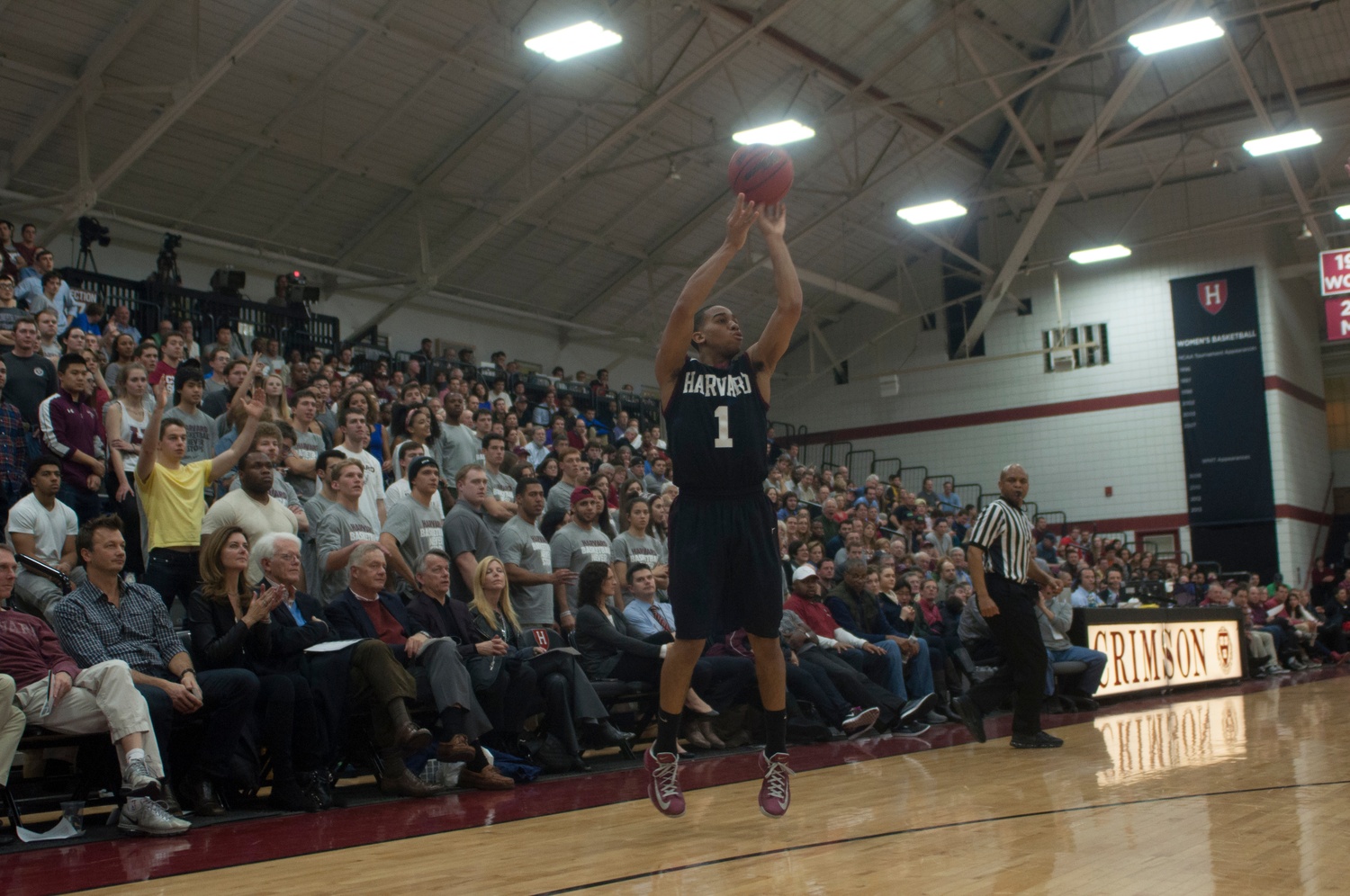 Junior co-captain Siyani Chambers is shooting 34.2 percent from beyond the arc for the season. By Robert F Worley
By Juliet Spies-Gans, Crimson Staff Writer

JACKSONVILLE, Fla.—One decade ago, sixth-graders Siyani Chambers and Marcus Paige stepped onto a hardwood court in the upper-Midwest corridor of the country. The point guards and primary playmakers of their respective teams, Chambers and Paige faced off that day in a matchup that would be repeated once every summer for the next half-dozen years, through the grind of AAU play and across their respective home states of Minnesota and Iowa.

Now, years later, roughly 1630 miles to the southeast and with more than half of college under their belts, juniors Chambers and Paige will go head-to-head once more; as Chambers sat in the front row of Harvard’s athletics complex watching the NCAA Tournament Selection Show this past Sunday, he learned that his old AAU battles would be renewed, with his Crimson (22-7, 11-3 Ivy) taking on Paige’s No. 4-seeded North Carolina (24-11, 11-7 ACC) in the second round of this year’s Big Dance.

“[Paige is] a great point guard,” said Chambers at Wednesday’s press conference from Jacksonville, Fla. “I've been playing against him for a long time. We lived pretty close to each other…so our teams crossed paths a lot.”

Since eschewing the Midwest and heading to Chapel Hill, N.C., Paige has evolved into one of the nation’s premier floor generals. A preseason All-American selection and the media’s ACC Preseason Player of the Year pick, Paige entered his junior season as the Tar Heels’ most recognizable face. He had averaged 17.5 points per game in his sophomore campaign, with his stat sheets often highlighted by his lights-out shooting from deep (38.9 percent).

“He's an outstanding, complete basketball player,” Harvard coach Tommy Amaker said. “He's crafty…. He's a kid that I think has played exceptionally well in bigger games for their program and has a knack for coming up big in the second half…. [H]e's a big-time scorer and a big-time shot-maker.”

Paige, with the preseason expectations piled on his back and one of the country’s toughest schedules in front of him, underwhelmed Tar Heel followers in the opening days of the 2014-2015 season. Prior to a Dec. 27 matchup against the University of Alabama, Paige had shot just 34.6 percent from the floor through 11 games, a nine percent drop from his sophomore year clip.

Paige was battling plantar fasciitis, and, along with him, his team was struggling. From Jan. 31 through Feb. 24, North Carolina dropped five of its seven games, including consecutive losses against Pittsburgh and Duke that saw the point guard shoot a total of 5-of-22 from the floor.

But something changed late in conference play, and the Paige that Chambers will match up with on Thursday is one that has made a cool 30 of his last 61 shots from the field, a statistic spanning the ACC tournament and North Carolina’s final regular season contest against Duke. His points, assists, and minutes per game are all up as he and his team march their way towards tournament play, a fact that both Amaker and Chambers are well aware of.

"He's a great playmaker and a great shot-maker. He runs [their] team very well and I'm looking forward to the matchup…. [W]e're going to do our best to try to contain him as much as possible." Harvard coach Tommy Amaker said.

“He's a great playmaker and a great shot-maker,” Chambers said. “He runs this team very well and I'm looking forward to the matchup…. [W]e're going to do our best to try to contain him as much as possible.”

Paige, meanwhile, will be facing a point guard that he deems a markedly improved shooter than the one he competed against in the gyms of years past. Chambers—whose primary skill in AAU play according to an ESPN scouting report was his ability to “score off the dribble or create for his teammates thanks to his speed, quickness and ability to penetrate”—has stretched his offensive repertoire beyond the arc, Paige noted.

“Looking at his percentages and watching [him] on film, he's really comfortable shooting [the] three-ball now,” Paige said. “Back in the day, he was just using his speed to drive by people. So he's still got that really good end-to-end speed with the ball, but his jump shot has really, really improved.”

That newfound knack for shooting the rock, Paige explained, is one of the facets of Chambers’s game that North Carolina will spend time “try[ing] to take away.” After all, it is only fitting that when Paige and Chambers face off once more, their matchup will come down to the same tricks of the arsenal, the same skillsets, that they showed off against one another on those parquet floors so many times, so many years ago.