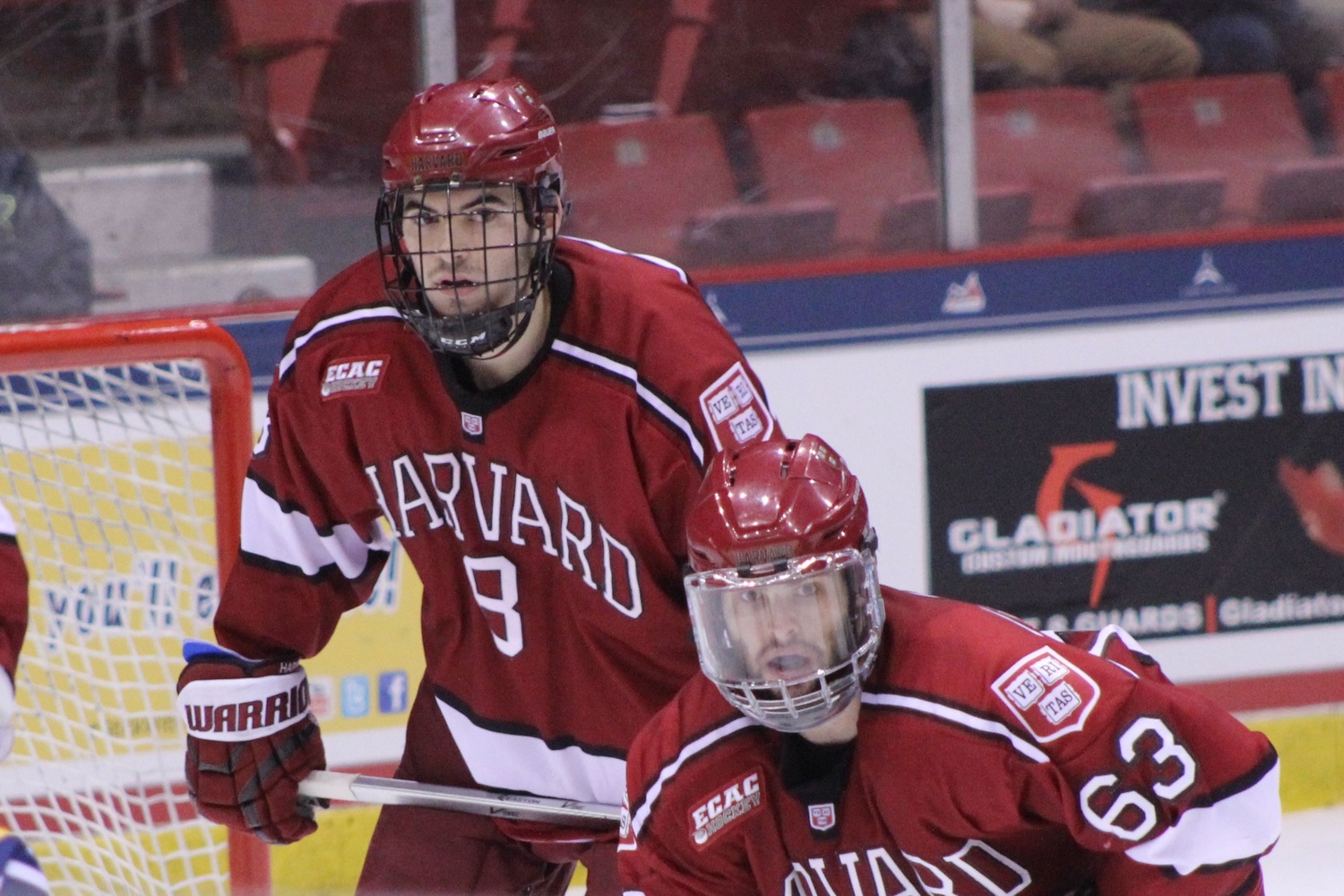 LAKE PLACID, N.Y.—By the time sophomore forward Tyler Moy split the Quinnipiac defense late in the first period, the No. 17/15 Harvard men’s ice hockey team seemed to have already dotted the i’s and crossed the t’s on its first ECAC championship game berth since 2012.

The fast-skating squad looked all too comfortable on the Olympic sheet in the early going of its 5-2 victory on Friday. A strike from newly-minted ECAC Player of the Year Jimmy Vesey got the Crimson on the board 30 seconds into the game and two goals 33 seconds apart from Moy and fourth-year forward Colin Blackwell propelled Harvard to a three-goal lead.

By the intermission, the Crimson (20-12-3, 11-8-3 ECAC) led, 3-0, and No. 7/7 Quinnipiac (23-11-4, 16-3-3) was fighting against history. Playing without top scorer Sam Anas, the regular season conference champions had not won a game after trailing by three goals since Nov. 6, 1999. The Bobcats came out of the break with a similar lethargy that they displayed in the first 20 minutes as sophomore forward Alexander Kerfoot drew Harvard’s third straight power play of the game at 7:21 in the period.

But a single slip at the blueline changed the shape of the contest. Sophomore forward Sean Malone tripped at the point to set up a shorthanded score from Quinnipiac forward Travis St. Denis, and the Bobcats began to play with renewed vigor.

Only a reversal of fortunes down the stretch would allow Harvard to hang on for its fifth ECAC semifinal win in 12 years. Vesey potted his nation-leading 29th goal into an empty net, and Malone canceled out his turnover with a 6-on-5 marker of his own to set up a Saturday evening date with No. 15/- Colgate for the Whitelaw Cup.

Late in the first period, Blackwell rocketed a top-shelf slap shot that kissed the cross-bar on its way in to give Harvard a two-goal lead. Less than two periods later, he appeared to be out for the tournament.

At 1:47 in the final frame, Quinnipiac sophomore Tim Clifton laid into Colin Blackwell with a powerful open ice hit along the right boards that sent the fourth-year forward face-down on the ice, clutching his head. 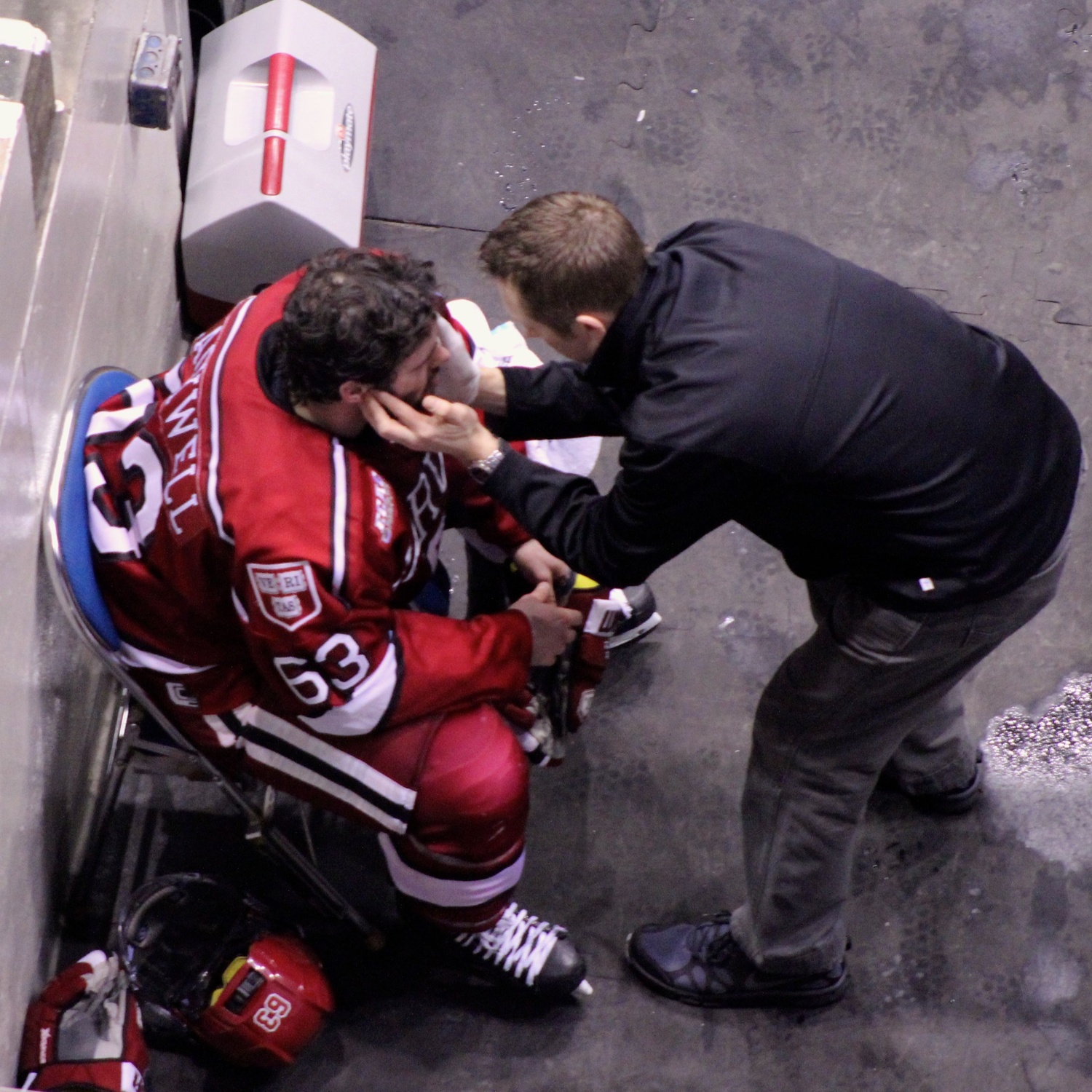 Fourth-year forward Colin Blackwell is evaluated by Harvard trainer Chad Krawiec after a hit by Quinnipiac sophomore Tim Clifton. Clifton was ejected for the play. By Michael D. Ledecky
Advertisement

Blackwell, who has a known history of head injuries, received attention on the ice from Harvard trainer Chad Krawiec. After undergoing a preliminary health evaluation on the bench, Blackwell left for the locker room, tossing his helmet in disgust. Yet he would return with about 10 minutes left to provide important plays as Harvard clung to a one-goal lead.

“I haven’t seen the tape of it, but live, it looked like [Blackwell] took a head shot, maybe an elbow to the head,” Donato said. “I think our whole bench took a big sigh of relief when he got up, and it seems like he was doing pretty well after the game.”

Clifton, meanwhile, received a five minute major for contact to the head and a game misconduct. While his high shoulder caused Blackwell’s head to snap back, Clifton did not appear to make high contact with his elbow.

Quinnipiac coach Rand Pecknold, who did watch tape of the play after the game, expressed disappointment with the officiating.

Harvard’s extended power play failed to score and struggled to mount pressure, yet the stretch stymied the Bobcats’ momentum and taxed their penalty kill, which was without one of its most important assets in Clifton.

As Harvard closed in on the win, St. Lawrence fans waiting for the second semifinal game began to cheer for the Crimson. The Saints beat Harvard twice this year by matching scores of 5-1, and their supporters were looking for more.

“I guess it’s good we got a couple fans in the stands,” Kerfoot joked.

After a 4-3 overtime thriller in the second semifinal, St. Lawrence will not get its third crack at Kerfoot’s team. Instead, Harvard will face Colgate, a team that the Crimson swept in the regular season with convincing 6-1 and 4-1 wins.

"It's down to one game for all the marbles," Colgate coach Don Vaughan said. "Even though there's a history there, and there's not a very successful one this year against Harvard, for us, we're not going to be thinking about that. We know what we need to do."

Despite Harvard's dominance against the fourth-seeded Raiders, both finalists have experienced similar journeys this season.

In the middle of the year, both Colgate and Harvard suffered important injuries and struggled to meet early-season expectations.

And in the postseason, both teams have received important boosts from stars who suffered potentially season-ending knee injuries: Fourth-year defenseman Patrick McNally, who returned last weekend from a knee injury, anchored the Crimson’s defense in the first semifinal, and junior forward Mike Borkowski, who returned to the Raider lineup in early February after ACL surgery in November, scored the game-winner in the second semifinal.

Colgate was struck with the injury bug again on Friday, as Raider defensemen Spiro Goulakos and Brendan Corcoran left their game early with injuries. Vaughan cycled four defensemen through overtime.

“We’re going to hit the reset button [tomorrow],” Vaughan said. “We’ll probably have to take a hard look at our [defensive] corps and try to get some fresh legs in there—I think we’ll be forced to do that.”