With a fifth-straight Ivy League title and yet another appearance at the NCAA March Madness tournament, Harvard's men’s basketball team just finished another season when they made more than three pointers—they are hitting the (literal) money shot.

The recent success of the basketball program since coach Tommy Amaker took the helm in 2007 has drawn crowds of students and alumni to games and generated enthusiasm about the team. This excitement has translated into excitement about the University in the middle of a $6.5 billion fundraising drive, which can potentially lead to donations, according to Harvard administrators.

University President Drew G. Faust, who said she attended several games at Lavietes Pavilion with her husband Charles E. Rosenberg this past season, said she has noticed alumni excitement surrounding the games. 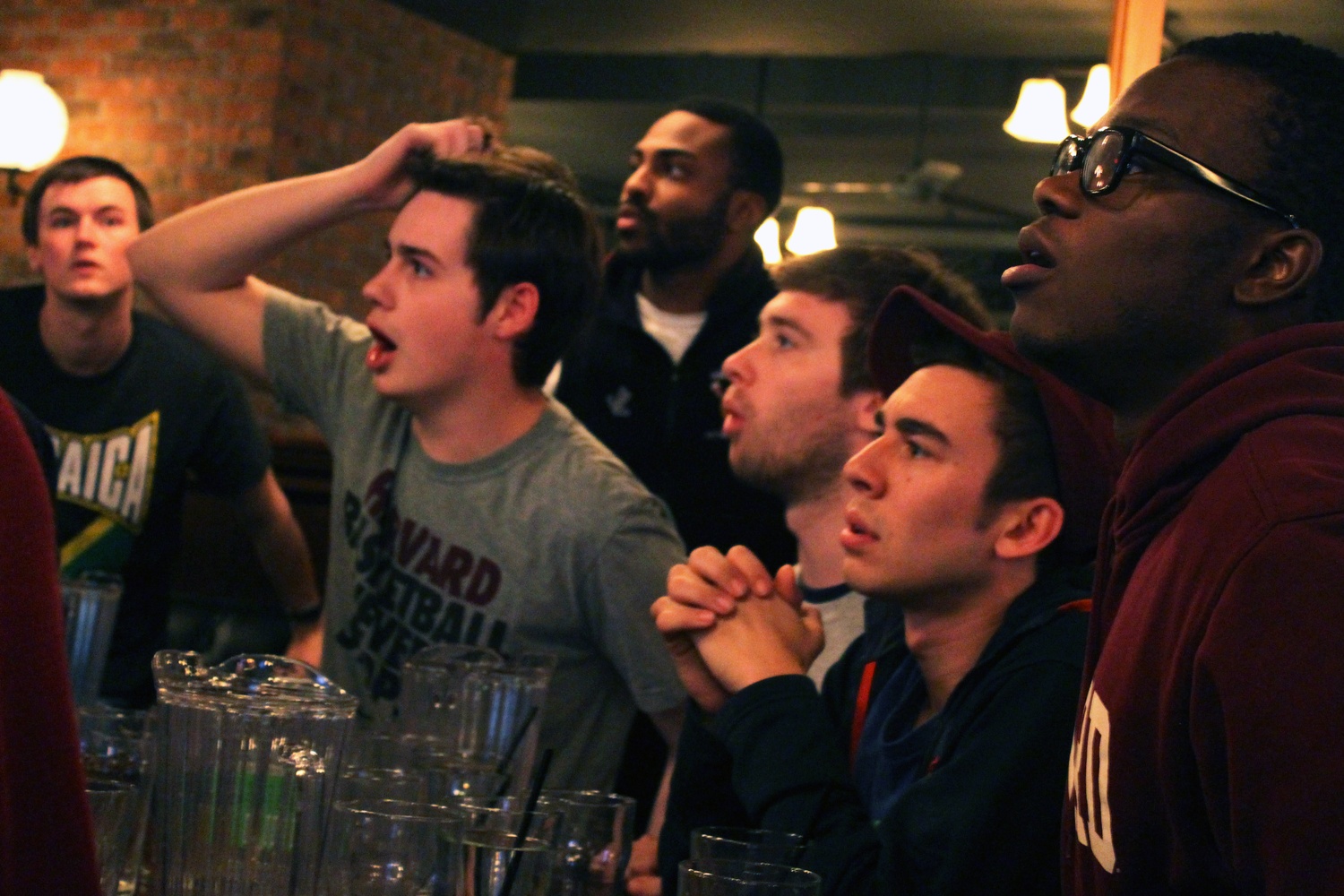 Harvard basketball fans watch the final moments of the Harvard vs. UNC game on Thursday at John Harvard's. By Nayab Ahmad

“When I go to the basketball games, I certainly see alumni there. I’m not always sure whether they’re going to be donors or not—some of them have been, some of them will be,” Faust said. “I think [alumni] ties to the Harvard community are only enhanced by their participation in this wonderful event, which is watching these students try so hard and do so well.”

Harvard basketball volunteer and former player Fred Schernecker ’89 said he has seen a change in alumni and community engagement at the basketball games in the Amaker era—games that once struggled to draw attendees now sell out, Schernecker said. Because alumni convene at the games, he added that the Lavietes Pavilion has become a place for Harvard administrators to meet with alumni and donors.

“Because the alumni are congregating and engaging in basketball, that’s a nice venue for Harvard to get together with their alumni and with donors,” Schernecker said. “I think there have been nice opportunities for the University to capitalize on [that excitement] and improve their fundraising.”

In recent years, the men’s basketball team has attracted national headlines—from 2012’s “Linsanity” craze surrounding the success of former Harvard player Jeremy Lin ’10 on the New York Knicks to the Crimson’s upset of 5-seed Cincinnati in the second round of the 2014 NCAA tournament. These events can remind alumni of the University, said Friends of Harvard Basketball member Katherine B. Rollins ’09, which can then facilitate Harvard in scoring donations by capitalizing on this enthusiasm.

“Any time you can trigger fond memories and excitement and pride within alumni, that’s going to manifest in support of the University,” Rollins said. “If you graduated last year or 60 years ago, you can find enjoyment in [basketball].”

Alumni have also organized events surrounding the games—particularly for fans to watch them during the NCAA tournament. Mitchell L. Dong '75, a longtime University financial supporter who regularly attends the basketball games, said a contingent of affiliates attended the NCAA game in Jacksonville, Fla. In addition to holding a pre-game party and post-game that drew 100 to 200 people, the alumni, professors, and administrators also sat together to cheer on the Crimson, according to Dong.

Though they were knocked out in the second round of the NCAA playoffs in a “heartbreaking” defeat to University of North Carolina just two weeks ago, Schernecker said the success of the team will continue to draw alumni to the courts, possibly with checkbook in tow.

“People like to be involved, or associated with winners and with things that are doing well,” Schernecker said.

An earlier version of the caption of the photo accompanying this article incorrectly identified the bar pictured. In fact, the photo was taken in John Harvard's Brewery, not Kennedy's on the Square.