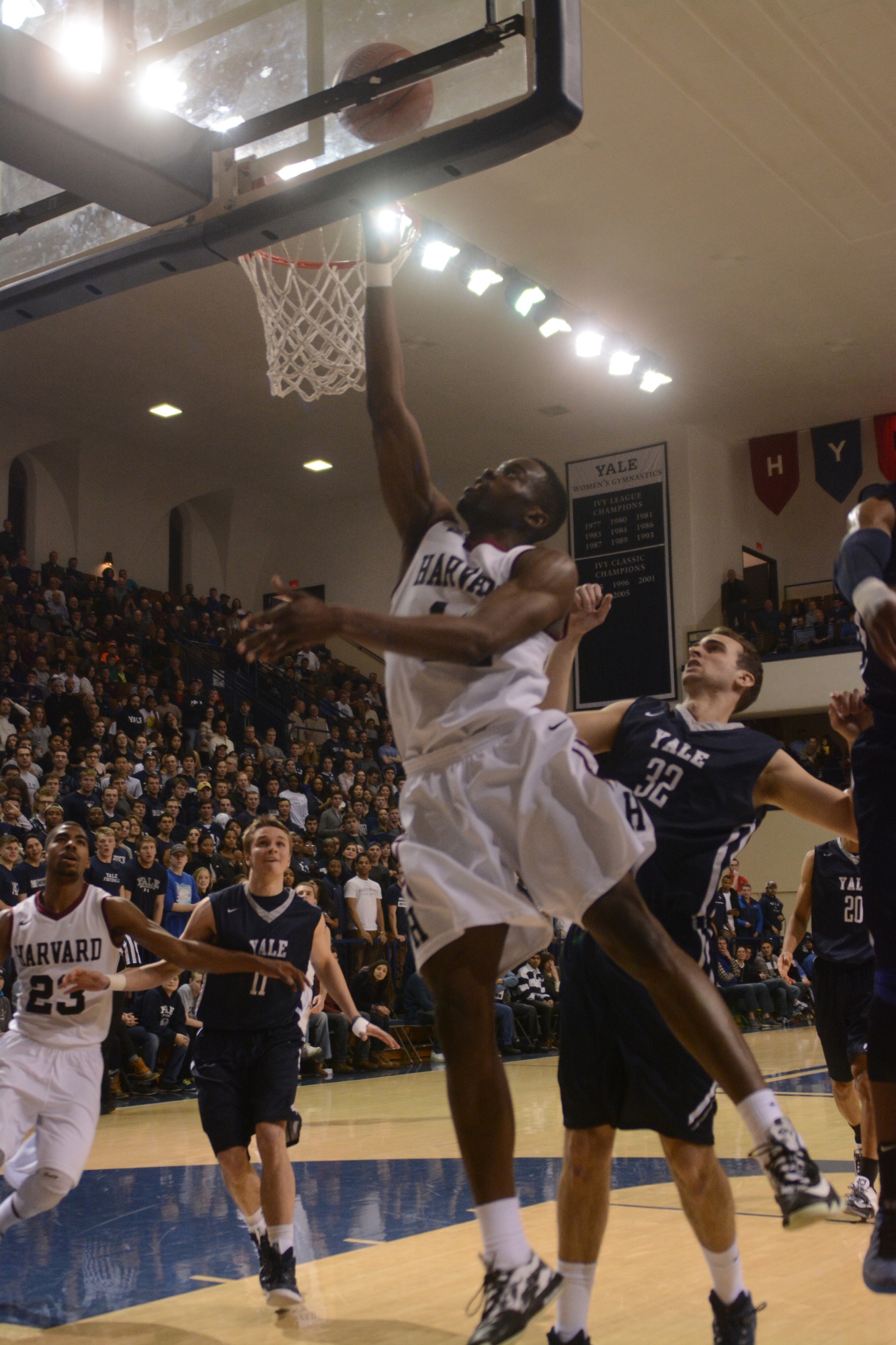 The Crimson was unable to pull off a successful rally against the Bulldogs despite a 22-point effort from senior Steve Moundou-Missi. By Robert F Worley
By Juliet Spies-Gans, Crimson Staff Writer

On the final Friday of conference play in the 2013-2014 season, then-junior Wesley Saunders found sharpshooter Laurent Rivard behind the arc in the left corner. Rivard didn’t hesitate before letting the shot fly over his Yale defender, giving his team a double-digit advantage and effectively sealing its bid to the NCAA Tournament.

On the final Friday of this year’s campaign, the hundreds of students donned in Crimson gear held their collective breath as their men’s basketball team tried to cross the t's and dot the i’s of a comeback against the Bulldogs with a similar series of shots from the three-point line.

But unlike one year ago, there was no catch-and-shoot from the left corner, no Rivard triple, and no Harvard celebration. This time, each attempted three ricocheted off the rim, placing the ball, physically and proverbially, in the hands of Yale (22-8, 11-2 Ivy). Fittingly, it was a missed trey that ended the game for the Crimson (20-7, 10-3), with the Elis finally on the redemptive side of rivalry weekend, marching out of Lavietes Pavilion with the 62-52 win on Friday evening.

“[It was a] tough night for us shooting the basketball,” Harvard coach Tommy Amaker said. “I thought we had a ton of shots [and] we just didn’t make them. I don’t know what else to say.”

While the Crimson misfired on all eight of its three-point attempts in the first half, it was the wide-open missed triples down the stretch that closed the door on any chance of a comeback that Harvard had.

After falling behind by 10, 33-23, in the opening minutes of the second period, the Crimson took advantage of a Bulldog cold shooting spell to go on a tear. Thanks to a triple from junior co-captain Siyani Chambers, a short corner jumper from senior forward Jonah Travis, and an and-one from co-captain Steve Moundou-Missi, Harvard climbed back within four points, 35-31, with just over 10 minutes to play.

With the crowd the loudest it had been all night and the signal from Amaker to press, the Harvard defense forced Yale freshman Makai Mason into an errant reverse-layup, sending the Crimson running in transition. Only moments later, Saunders caught a cross-court pass from Chambers, squared up, and let the ball go. The shot that would’ve brought the Crimson within one point for the first time since the opening half clanged off the rim, resulting in a buried Bulldog three on Yale’s ensuing possession.

With 4:48 to play, an almost identical sequence played out. Down four and in possession of the ball, Chambers swung the rock to the left wing where sophomore sharpshooter Corbin Miller lay waiting. But as was the case all night, Miller misfired. Just one minute later, Miller missed once more.

Harvard’s 11.8 percent from deep was the worst three-point shooting performance the team has seen since 2013, while Friday's contest was the only time all season that Miller didn’t connect on a single field goal, ending the night 0-of-9 from the field—eight of which came from beyond the arc.

“It was an off night,” Saunders said. “We just let our emotions get too high.”

So while Rivard’s three in 2014 punched Harvard’s ticket to March Madness, it was Yale, this season, that celebrated after the final triple of the night, clinching a share of the Ivy title in front of a silenced, sold-out Lavietes crowd.

Typically described by teammates as “poised,” the ever-composed Steve Moundou-Missi was furious as he walked towards his squad’s huddle with 16:50 to play on Friday night. He yelled something towards the bench, slapping a towel against the hardwood in a rare display of emotion. The Crimson was down 10, and the fate of his last few days of collegiate basketball was hanging in the balance.

And after the timeout ended and he took the court once more, Moundou-Missi seemed to further push aside that ever-calm demeanor, doing the dirty work—whatever it took—on both ends of the floor to give his team a fighting chance at a comeback.

Less than a minute after the timeout, a Miller missed shot led to an Eli fast break. Moundou-Missi ran the floor alongside Yale’s guards, swatting away senior Armani Cotton’s layup attempt before pivoting and sprinting down the court the other way; and fittingly, when Saunders found Moundou-Missi 17 feet from the basket in the right corner on the next possession, the forward showed no hesitation putting up the jump shot—burying it and beginning the Harvard’s run.

“He left it all out there on the court,” Saunders said. “[He] was battling, fighting.”

When Saunders sent an entry pass to Moundou-Missi with just over 11 minutes to play, the co-captain got his defender in the air, bullied his way into the paint, drew contact, and finished the layup. Three-point play, four-point game.

Then it was a hook shot over the extended right arm of Yale standout Justin Sears. Then it was a fast break alley-oop dunk from Chambers, who rewarded the big man for sprinting in transition, throwing the ball towards the hoop as Moundou-Missi soared in from the right wing.

The Lavietes crowd roared as the Yale bench signaled for a timeout—and when Moundou-Missi jogged to his team’s huddle once more, a semblance of his typical poise was back.

The co-captain would score six of his team’s final 13 points, finishing the game with a team-high 21 points on 9-of-18 shooting from the floor—his best offensive performance this season.

“He laid it all on the line,” Amaker said. “[H]e put his heart and soul out there, not wanting to feel like he had any regrets, and that was really wonderful to see….  [His] effort, energy, determination—how he played tonight was outstanding. We just didn’t have enough help.”

Following the Crimson’s 52-50 win over Yale in New Haven last month, senior guard Javier Duren sat slumped in his seat, speaking to the media in the low, hushed tones reserved for those moments in sports when a game is lost, a big shot missed, a dream dashed.

“[I’d] take a win, especially over Harvard, over anything I could accomplish personally,” he said.

One month later, the personal accomplishments and program wins that he spoke of went hand-in-hand, as Duren led his team from tip-off to final buzzer on Friday evening, filling up the stat sheet in his last go-around against his hated Harvard squad.

His consecutive jumpers in the game’s opening minutes gave Yale its early advantage and his lights-out shooting in the contest’s waning moments sealed the Eli victory. Duren tallied 11 of his team’s 15 points in the last 1:28 of play, shooting a perfect 8-of-8 from the stripe in that span en route to his game-high 22 points.

Duren’s performance was the distorted mirror image of Harvard’s, as he responded, over and over again, to the Crimson’s runs by hitting big shots. When Harvard cut it to two, 43-41, with 3:40 remaining, Duren answered by attacking the elbow and crossing over twice, before stepping back and burying the jumper. Soon after, when Moundou-Missi brought Harvard within four with less than two minutes to play, Duren drilled a three from the left wing, knocking it down over the smaller Chambers.

“Duren was outstanding tonight,” Amaker said. “I [think] his poise, toughness, and confidence can be very contagious for their club, and I thought he was the best player on the floor…. We knew coming in how good and how tough he is.”

On a night when both teams were vying for a share of the Ancient Eight title, Duren pulled the crown the Elis’ way—finally getting that win he wished for one month ago.