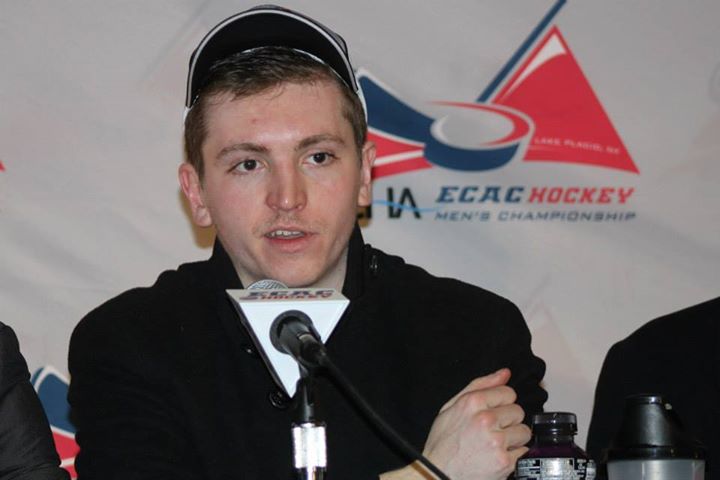 Junior forward Jimmy Vesey, shown speaking at a press conference after the Crimson's win in the ECAC championship game on March 21, has elected to return to school for his senior season. By Michael D. Ledecky
By Michael D. Ledecky, Crimson Staff Writer

Men’s hockey standout forward Jimmy Vesey announced his intent to return to Harvard for his senior season on Tuesday.

In a press conference Saturday after Nebraska-Omaha eliminated the Crimson from the NCAA tournament, Vesey said that he would talk to Harvard coach Ted Donato ’91 and his parents about his opportunity to sign with the National Hockey League’s Nashville Predators. On Tuesday, he informed the Predators that he would exercise his final season of NCAA eligibility.

“I just felt that there were a lot of reasons to come back to Harvard,” Vesey said on Tuesday. “To give up a Harvard degree would be a really tough thing to do for me. I also feel that we’re going to be one of the top teams in the country next year.” 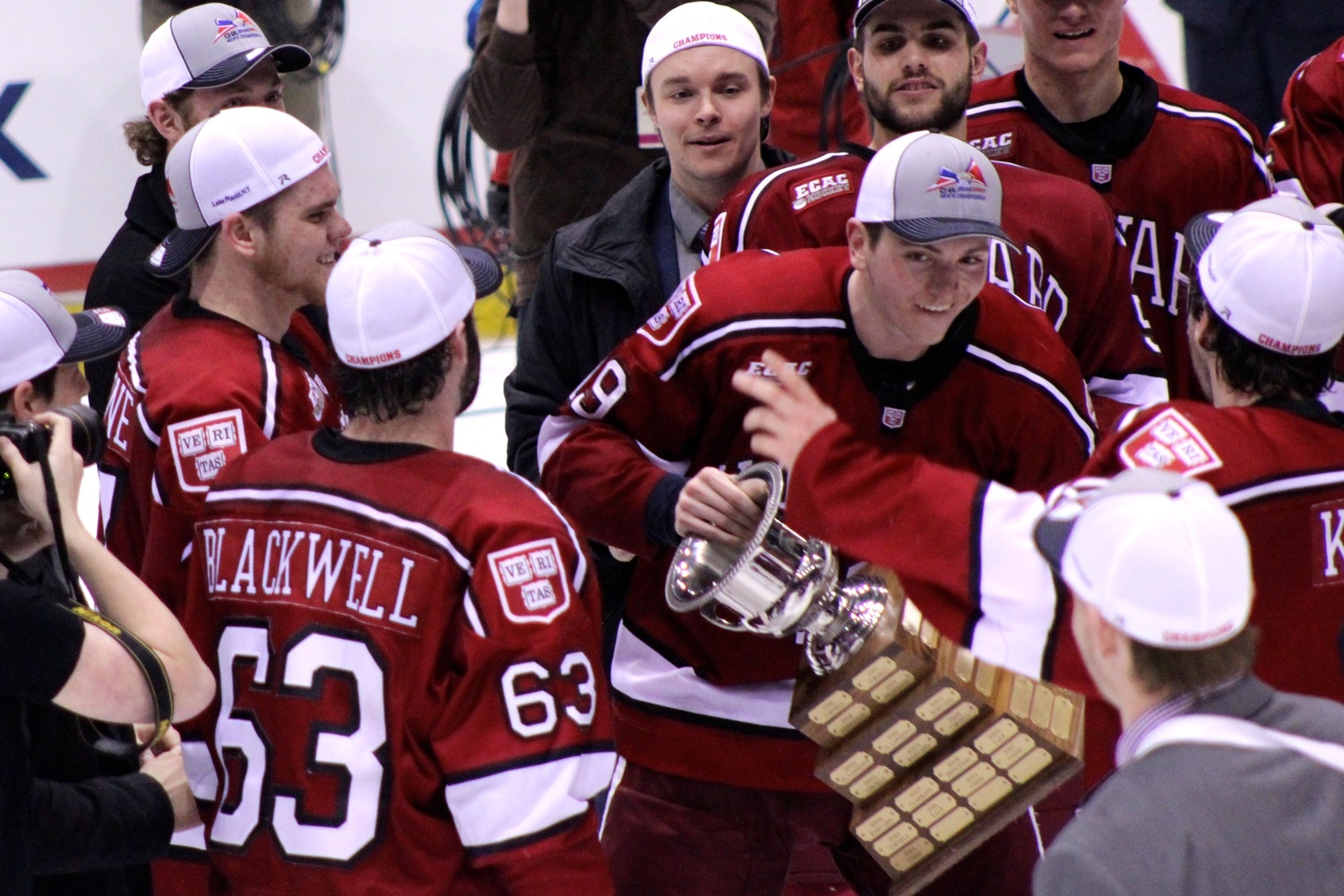 Vesey, shown after the Crimson won the ECAC title on March 21, was named Most Outstanding Player of the conference tournament after scoring an ECAC-record nine playoff goals. By Michael D. Ledecky

Vesey leads Division I men’s college hockey in goals scored this season. His 32 goals this year are more than any other Harvard player has scored in 24 seasons. In the ECAC tournament last month, Vesey scored a playoff-record nine goals as Harvard earned its first conference championship since 2006.

Last week, Vesey became the 11th Crimson player to win the Walter Brown Award, a 63-year-old annual award that recognizes the best American-born college hockey player in New England. He is one of 10 finalists for the Hobey Baker Memorial Award, given to the nation’s top college player.

On Saturday, he recorded the Crimson’s lone goal in the team’s last game of the season—a 4-1 loss to Omaha in the Midwest Regional semifinal in South Bend, Ind. Following the loss, Vesey was unusually emotional, fighting back tears at the postgame press conference. On Tuesday, he said that he wanted to use his senior year to get “one last crack at” a Frozen Four run.

“I’d like to be a part of another great season of Harvard hockey, and I just felt like that was in my heart,” Vesey said.

With his decision, the Crimson may return in the fall with all 12 forwards who played in the ECAC championship game. Junior co-captain Kyle Criscuolo, who skated on the first line with Vesey this year, expressed his excitement about Vesey’s announcement.

“I think we realized how much dedication and hard work goes into winning a championship for the ECAC,” Criscuolo said. “Having all the forwards back is huge for us next year in terms of experience, and that will help us in our goal of returning to the NCAA tournament.”

Nashville selected Vesey with the 66th overall pick in the third round of the 2012 NHL Entry Draft prior to the Charlestown native’s arrival at Harvard. With four full games left in their regular season, the Predators are currently first in the NHL’s Central Division and have already qualified for the Stanley Cup playoffs.

Vesey said that Nashville respected his decision to remain amateur.

“I think [the Predators organization] would have liked to have had me on for the rest of the regular season in Nashville and for the playoff run that they make, but they were understanding that a Harvard degree is something that is really important to me and my family,” Vesey said.

A previous version of this story incorrectly described the Walter Brown Award. In fact, the award goes to the best American-born college hockey player in New England.