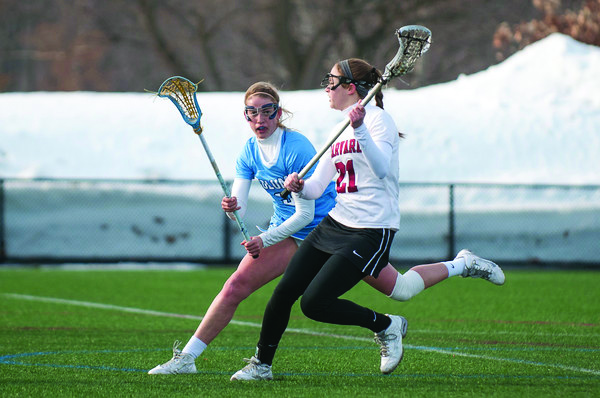 Despite losing the second half by a goal, the Harvard women’s lacrosse team decisively edged out the Crusaders, 12-4, Tuesday night at Soldiers Field Lacrosse Stadium.

A game-high four goals by sophomore Marisa Romeo helped Harvard (6-6, 3-2 Ivy) to a 10-1 start in the first half. The Crimson held steady through the final minutes to draw to .500 with three games left in the regular season.

“The offense was really clicking in the first half,” said junior co-captain Audrey Todd, who also recorded a hat trick in the game’s first 30 minutes.

Nine of Harvard’s 12 goals were unassisted. Todd scored first on a free position shot just over five minutes into the game to catalyze an 8-0 Harvard run to open the game.

The Crusaders would not get on the board before Romeo recorded her fourth unassisted goal of the night at with 12:13 left in the first half.

The Syracuse, N.Y. native leads the Crimson with 36 goals and has netted eight hat tricks this year. She also recorded an assist on Harvard’s second goal of the game, a strike by freshman midfielder Eliza Guild.

Romeo and Todd combined to score or assist the first nine goals of the match. Junior Kaitlin Concilio broke through for the Crusaders’ first goal on a free position shot with 9:16 left in the first frame.

“We were winning the draw control, possessing the ball well, dodging hard, drawing fouls and finishing our shots,” Todd said. “Ultimately, that gave us a nice lead heading into halftime.”

Four of the Crimson’s goals came from free position opportunities in the opening frame, with the Crusaders (4-12) tallying a total of 13 fouls for the period. However, Harvard would finish the game with 27 fouls of its own after executing 18 fouls in the second frame.

Holy Cross senior Laura Ryan scored the game’s final goal on a free position shot with over 12 minutes left. Harvard shifted its focus in the second half and tried to get more players involved on offense.

The change in strategy led to an increase in turnovers and fouls on the Crimson’s end, but the result was never in doubt. Harvard also experimented with a zone defense.

“Our team has played a really tough schedule this year, and I think that showed tonight against Holy Cross,” said junior co-captain defender Tory Waldstein. “We were able to play faster than them and be really aggressive. I thought our defense played well and we don't usually play a zone so it is always fun to work on that.”

Freshmen accounted for all three of Harvard’s second-half points.

Rookie midfielder Julia Glynn chipped in a first frame goal as well as Harvard final goal. Freshman midfielder Nekele McCall netted the Crimson’s other goal in the second period after a feed from Glynn.

All three of Harvard’s goaltenders saw playing time on Tuesday. Junior Kelly Weis picked up her sixth win of the year with two saves on four shots. Freshman Meredith Brown took over with under 20 minutes to play in the second half, and classmate Olivia Gundrum closed out the game’s final 2:20 in her third career appearance.

According to Todd, Tuesday highlighted details that she and her teammates can improve as they prepare for their Saturday road match at Cornell. With two weekends left in the Ivy League regular season, the Big Red and the Crimson are jockeying for a berth in the four-team Ivy League tournament.

“I think that going into Cornell, we will keep working on the draw control and ground balls,” said Todd, who has now recorded hat tricks in each of her last two games. “Fifty-fifty balls win games, and defensively, we need to be able to get the ball when we put it on the ground.”

—Staff writer Kelley Guinn McArtor can be reached at kelleyguinnmcartor@college.harvard.edu.

Due to an editing error, a previous version of this article incorrectly stated that Harvard opened the game on a 9-0 run. In fact, the Crimson scored the first eight goals of the game.