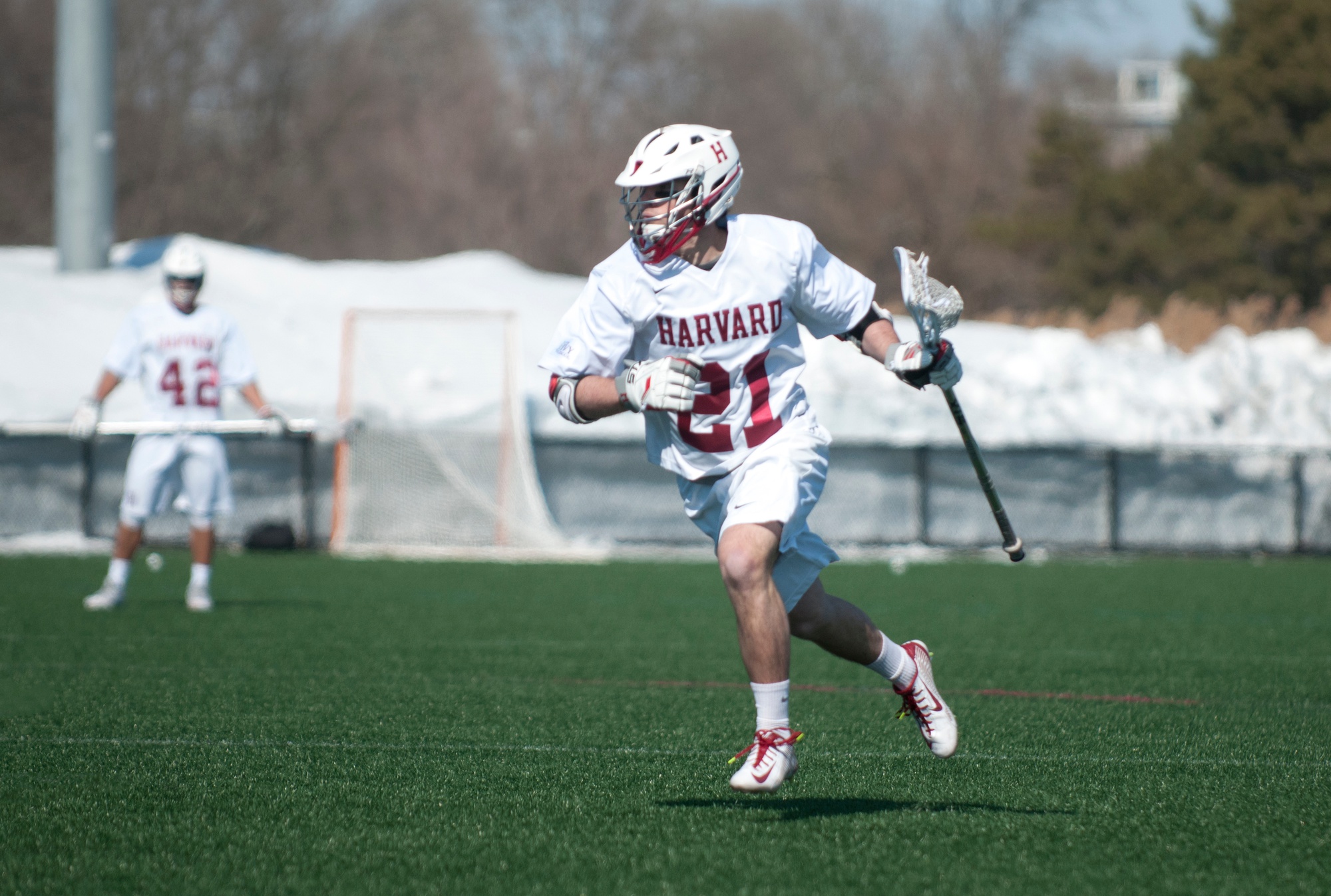 Junior midfielder Ian Ardrey, pictured above in March 7 action against Penn State, currently leads the team in goals with 22. He tallied a goal in Harvard’s win against BU Tuesday night off of six shots on goal, bringing his point total for the season up to 29.
By Theo Levine, Crimson Staff Writer

Each of the first three quarters of the Harvard men’s lacrosse team’s game against Boston University finished with the score tied, an indication of how close the contest was throughout.

Only one goal would be scored in the fourth quarter, as the Crimson’s season leader in points and Tewaarton Watch List candidate, junior attackman Devin Dwyer, scored the decisive goal to put Harvard on top to earn a tight 9-8 victory.

The Crimson (6-5, 1-2 Ivy) came into this game against a traditionally lackluster Terrier program (6-5, 3-3 Patriot League) on a high note, having beaten No. 6/8 Cornell last weekend and looking forward to tough conference games for the rest of the season against several of the top teams in the nation. BU, however, made it clear that they could not be overlooked, refusing to give ground to Harvard throughout the match.

“We certainly found a way to win,” Harvard coach Chris Wojcik ’96 said. “But we were disappointed in the way that we came out. Our energy and focus were really just not where they needed to be early on, and that didn’t put us in the best position. Our urgency just wasn’t good enough.”

The Terriers controlled several key aspects of the game, winning the groundball battle by a wide 33-23 margin, and controlling the game from the faceoff, securing 16 of the 21 faceoffs to put the Crimson in a tough position.

“We weren’t our best on ground balls,” Wojcik said. “We played poorly at the faceoff, and that made it really difficult to build any momentum after we scored and get possessions.”

Unfortunately for BU, the extra possessions and shots that those efforts earned were not enough to outscore Harvard, thanks in large part to junior goaltender Bryan Moore. Moore was a fiend in net for the Crimson, securing 18 saves and finishing with a stifling 69 percent save percentage, the highest save percentage a Harvard goaltender has recorded since 2013.

“Bryan’s been playing unbelievably lately,” said Harvard captain and junior midfielder Sean Mahon. “He’s an incredible backbone for our defense, and having him back there playing as well as he’s been playing has been huge for us.”

The Crimson’s defense was also able to successfully disrupt the Terrier offense, leading to 15 turnovers, though nine of these were unforced. Sophomore long-stick midfielder Matt Ryan was instrumental in the defensive effort, leading all players in both ground ball pickups and caused turnovers, with six and three respectively.

BU was strong from the outset, jumping out to a 2-0 lead in the first five minutes. Harvard then tightened up, not allowing another goal in the first quarter as Dwyer and freshman attackman Tim Edmonds each notched goals to tie the score up.

The two teams traded goals in the second quarter, as emergent freshman midfielder Joe Lang, Dwyer, and junior attackman Ian Ardrey scored, only to see BU answer each to tie the game up going into halftime.

The third quarter went the same way, as junior attackman Will Walker, Lang, and junior midfielder Walker Kirby notched goals that the Terriers responded to in kind, leading to a tie game at 8-8 going into the fourth quarter.

“We couldn’t really build a lead,” Wojcik said. “We didn’t get faceoffs, and weren’t strong enough on ground balls, and we didn’t really finish all of our shots, and that held us back.”

Defense reigned in the final stretch, as neither team could get past the others’ goaltender through nearly the first 13 minutes of the quarter. Dwyer’s goal, his third of the day and fourth point, was all the Crimson needed to secure the win, coming with 2:05 left in the game. Dwyer leads the team in points so far this season with 42 through the first 11 games.

This game was Harvard’s last non-conference game before closing out the Ivy League season and moving into the playoffs.

“Its always good to win,” Mahon said. “But this game wasn’t our best. We’re hungry to get back out there to practice, put this behind us, and prepare for Penn.”

—Staff writer Theo Levine can be reached at tlevine@college.harvard.edu