Calls for Divestment: A Retrospective

For tobacco and South Africa campaigns, activism and outcome varied 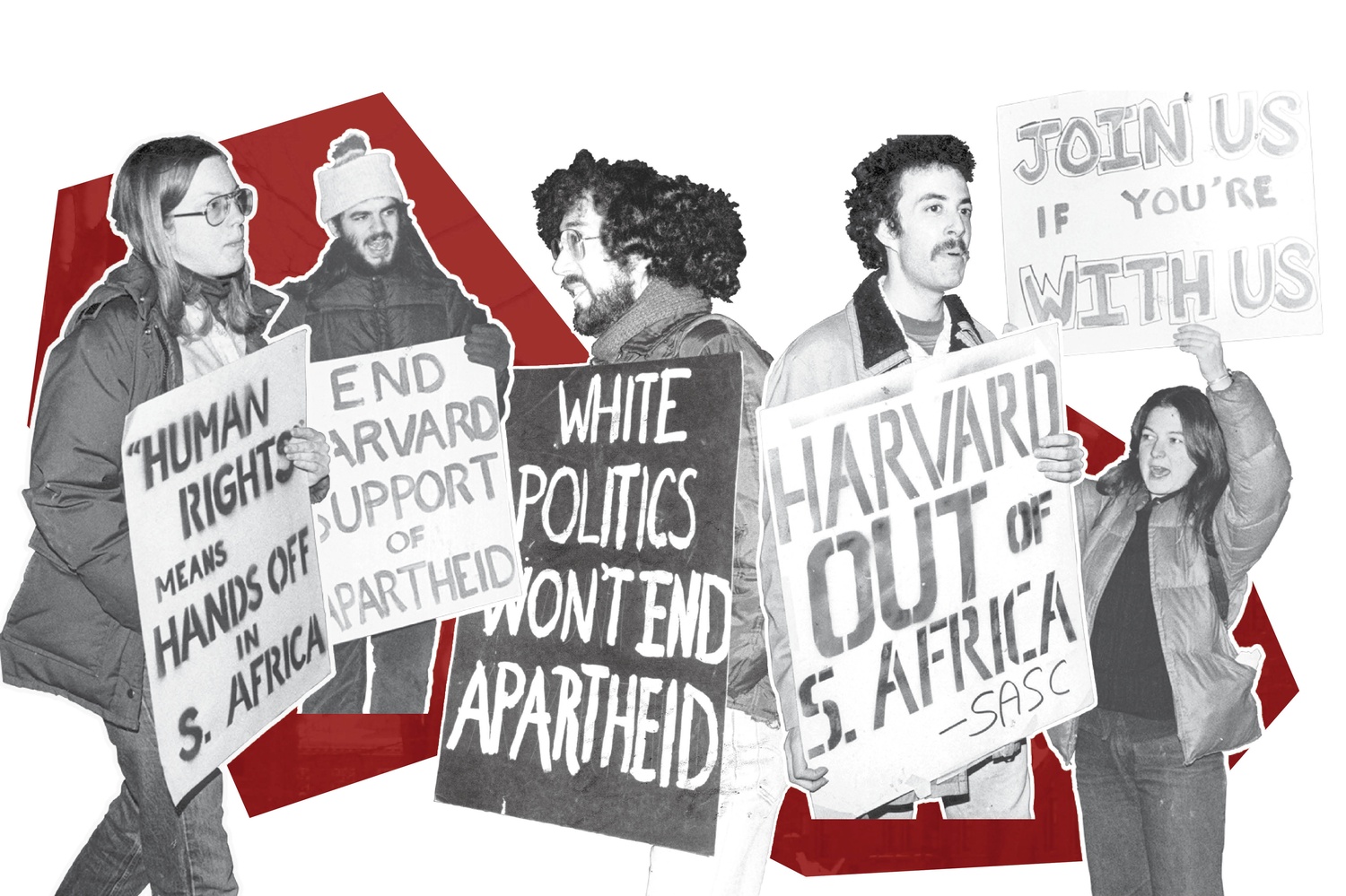 In black and white photographs from 25 years ago, long-haired undergraduates in winter coats stand brandishing posters open-mouthed, perhaps in the middle of a chant.

“Join us if you’re with us,” reads one poster. “White politics won’t end apartheid,” reads another. “Human rights means hands off in South Africa,” reads a third.

In the late 1980s and early 1990s, these students made headlines by urging University administrators to pull Harvard’s investments from firms that did business with the apartheid government in South Africa, though Harvard never fully divested, despite continued protests.

Around the same time, however, Harvard’s involvement with another lucrative industry, tobacco, did not trigger such widespread attention, in part because the University announced its decision to divest its stocks from tobacco companies in May 1990.

When asked about these movements, former University President Derek C. Bok, whose tenure spanned 1971-1991, wrote in an email that the presence of campus protests was “obviously accurate in the case of the issue of investments in South Africa.”

For the University’s top administrator at the time, student opposition to Harvard’s investment in the tobacco industry were less visible.

“In the case of tobacco, however, there were no student controversies or any other protests leading up to our decision to divest, nor did protest activity of any kind play any role in the decision of the Corporation,” Bok added in his email. “I was never asked to meet with anyone or any group at any time prior to the decision.”

Throughout the 1990s, movements centered around apartheid, tobacco, student diversity, and ROTC created an atmosphere of protest on campus, according to Randal S. Jeffrey ’91, the Chair of the Undergraduate Council’s ad hoc committee on divestment from apartheid and a member of the Southern Africa Solidarity Committee.

“A lot of the folks were involved in some of the different protests’ issues,” Jeffery said. “I definitely think they complemented each other.”

While administrators harbored mixed feelings for the anti-apartheid and anti-tobacco movements, on the whole they acknowledged students’ interest in the issues and right to protest respectfully.

“I would say that the mood on campus was generally positive to both of these campaigns, but it was not intense [like political action of the 1960s],” said Everett I. Mendelsohn, who was a History of Science professor at the time. “By 1990 there was a level of understanding: ‘Yes, something like this should come up.’ It didn’t rise to a great crescendo.”

Jeffrey recalled waking up early in the morning with his peers to take a stand against the University’s investment in South African companies 25 years ago.

In an age before social media, they used flyers to publicize their cause. “The flyers were definitely effective,” Jeffrey said. “We would get up at 7:00 a.m. and get them up before the other folks were able to use up space on the boards.”

Conversations around complete divestment from companies that did business in South Africa and what some students called larger moral problems—some of which started in the 1970s—sprang up in articles in The Crimson and protests on campus throughout the late 1980s and early 1990s. 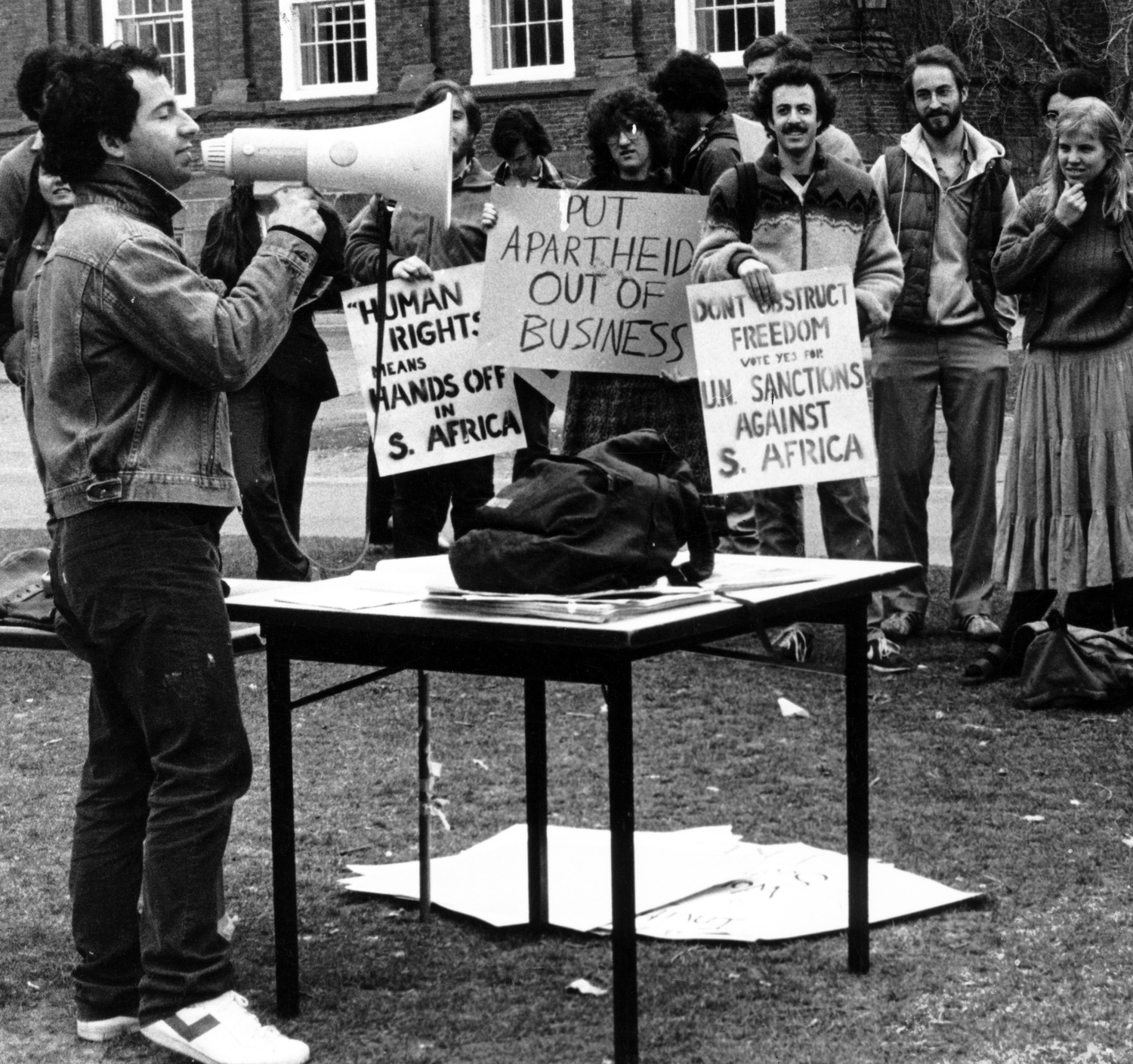 A speaker addresses the crowd of students gathered to protest Harvard's investment in South African holdings during the late 1980s. A sign reads: "Put Apartheid Out of Business." By Crimson file photo

On Oct. 2, 1990, Jeffery, as chair of the UC’s ad hoc Committee on Divestment, wrote an editorial in The Crimson outlining his views on what he called the University’s problem with selective divestment in South Africa-related companies and businesses.

Bok argued against complete divestment from the South African companies, citing what he called “‘non-rational’ judgments” on the part of the student protesters and “brutal repression” in other countries that had gone unrecognized, according to The Crimson and the 1989-1990 President’s report, respectively.

The 1990 mid-year report on Shareholder Responsibility, moreover, indicated that the University’s investments in South Africa had increased $30 million to a total of more than $168 million, The Crimson reported.

“[The administration] certainly acknowledged the position we were advancing,” Jeffrey said in an interview last week. “It was important both to make our voices known on campus as well as send the message...apartheid was something that we strongly disagreed with.”

By April 1990, anti-apartheid activists and Bok had reached a standoff. Meeting with four members of the UC’s ad hoc committee on divestment, Bok said he “had not been swayed, or impressed, by the undergraduates’ presentation,” The Crimson reported.

Mendelsohn said the disconnect between Bok and the protesters led students to promote the cause on their own.

“It struck me that the University administration at the time was misreading what was happening in South Africa,” Mendelsohn said. “My sense is that the major activity and thrust in the divestment was student-led.”

Mendelsohn also said he recalls several faculty meetings, during which some professors who he thought would not be vocal on the issue raised their voices against the stance of the University.

“The divestment from South Africa was a move that many faculty supported,” Mendelsohn said. 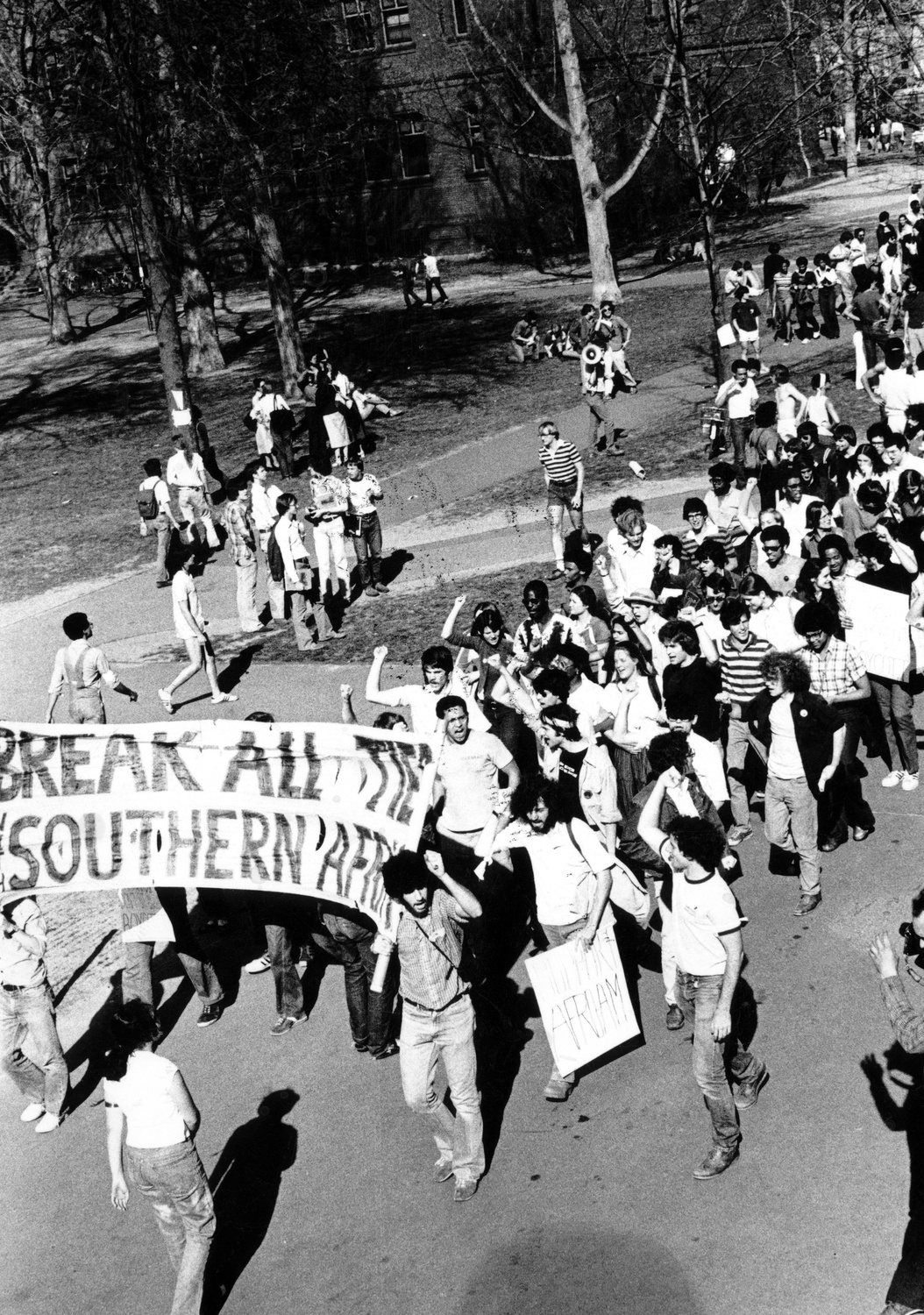 Crowds gather in support of Harvard's divestment from its South African holdings in the late 1980s. By Crimson file photo

Despite student and faculty support for divestment, administrators followed a different path, arguing that divestment from South African companies would be detrimental for the University’s finances.

“If Harvard were consistent in pursuing social justice through divestment—if it merely agreed to divest from all companies doing business in countries suffering from severe political oppression—the number of black-listed firms could easily be long enough to push our losses to high levels indeed,” Bok wrote in the 1989-1990 President’s report.

In an October 1988 Crimson editorial entitled “Blue Smoke and Mirrors,” John J. Murphy ’89 wrote that the University “wield its influence as a stockholder to influence the tobacco companie” on the grounds that the industry promoted a harmful activity.

Twenty-five years later, however, Murphy said that, on his own, he would not remember discussions around tobacco.

“If you had asked me for a list of protests I knew about or had seen, I wouldn’t have even come up with a tobacco-related controversy,” Murphy said in an interview.

In other University schools, however, students played a more active role in protesting Harvard’s investment in tobacco.

Philip P. Huang, who graduated from the School of Public Health in 1990, for example, made a radio advertisement, targeting Bok’s decision to invest the University’s finances in tobacco companies.

Huang said Bok sent him a letter in response, which stated that Harvard no longer had any holdings in tobacco but failed to clarify whether the University had divested. In turn, Huang said he gave Bok’s letter to the media, including reporters at The New York Times and The Boston Globe, in an effort to pressure the University.

“The media asked them, ‘Have you divested,’ and it really pressured them to take a stand about divestment,” Huang said.

Bok in the 1989-1990 President’s report wrote about tobacco’s relationship to human health as the chief and singular reason influencing the decision to divest from the tobacco companies.

“Harvard has sold its stock in tobacco companies because of their demonstrated health effects, especially in the light of mounting cigarette sales to persons too young to evaluate the risks and to inhabitants of foreign countries where warning labels are not required,” Bok wrote.

Mendelsohn recalled that the discussions around tobacco took a different tone and elicited different reaction than the anti-apartheid protests on campus.

“The tobacco issue was there,” Mendelsohn said. “I thought that students had a perfectly good case to make. In a sense it had a different moral suasion than the anti-apartheid issue.”

In a letter dated May 18, 1990, Bok wrote that Harvard had decided on divestiture from the tobacco companies, The New York Times reported. Divestiture began in September 1989 and had been completed in March 1990, according to the Times.

Fast forward 25 years: Dots of blue light punctuate an unseasonably warm April night. Taken together, the tiny lights spell the words “Divest From Fossil Fuels” and are held up in front of Massachusetts Hall by current students, alumni, and other advocates for the University’s divestment from fossil fuels.

The 1990s protests, in part, paved the way for current calls for divestment, according to some students, alumni, and professors.

Members of Divest Harvard, the student organization currently urging University President Drew G. Faust to divest the University’s endowment from fossil fuels, said they see their protests as part of a larger historical continuum of students pitted against the University around divestment issues, according to group leaders.

“When you look at activism on college campuses, one of things that stands out is the South African divestment movement,” said Divest Harvard co-founder Chloe S. Maxmin ’15.

Canyon S. Woodward ’15, another member of the group, agreed with Maxmin, saying that Divest Harvard has looked to past protests for inspiration.

“I think our movement is definitely informed by past ones, especially the tobacco divestment,” Woodward said.

“No sensible person smokes tobacco, and no decent person approves of Apartheid, but everyone relies on fossil fuels,” Mansfield wrote in an email.

Murphy said he thinks institutions like Harvard, through their choices and subsequent actions, have and can continue to give voice to certain issues.

“I do think universities play a role as sort of a moral compass in society,” Murphy said. “There can be power in them making a statement in where…to head for the future.”