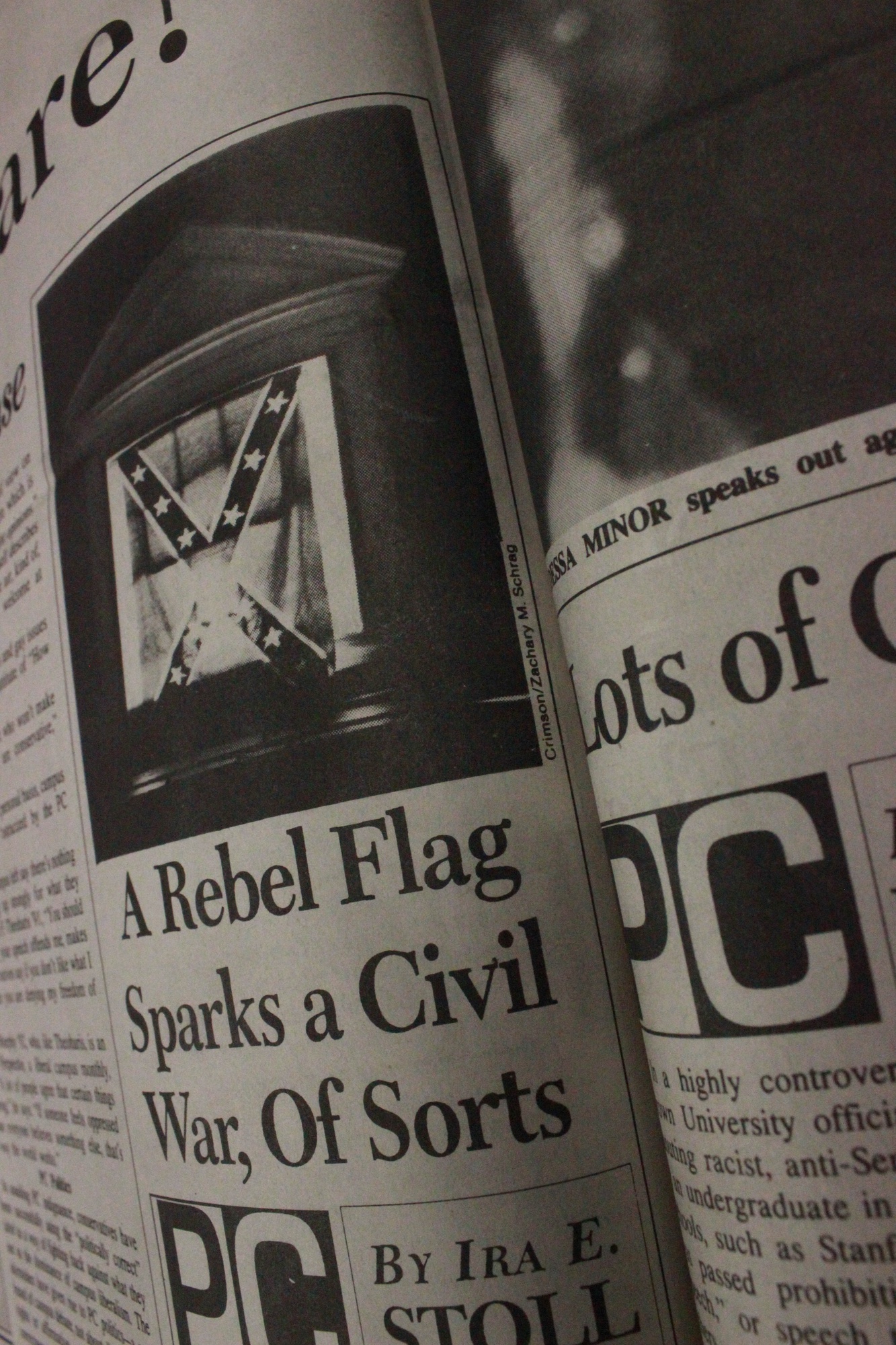 Beginning in the winter of 1990, a series of students publicly hung Confederate flags in their dorms, sparking controversy as students struggled to draw the line between freedom of speech and harassment.
By Annie E. Schugart and Samuel Vasquez, Crimson Staff Writers

In the winter of 1990, a sophomore hung a Confederate flag in the window of his Leverett Tower dorm room. The student removed the flag from the window and rehung it out of the public view after a House tutor suggested that some members of the community could find it offensive.

In a Letter to the Editors of The Crimson submitted after the removal of the flag, Jon P. Jiles ’92 wrote that he hung the flag to represent the Southern values of his home; today, he added that he never intended to offend his fellow students. In 1990, however, the incident and a series of similar displays of the Confederate flag polarized the student body, questioning where to draw the line between freedom of expression and harassment. 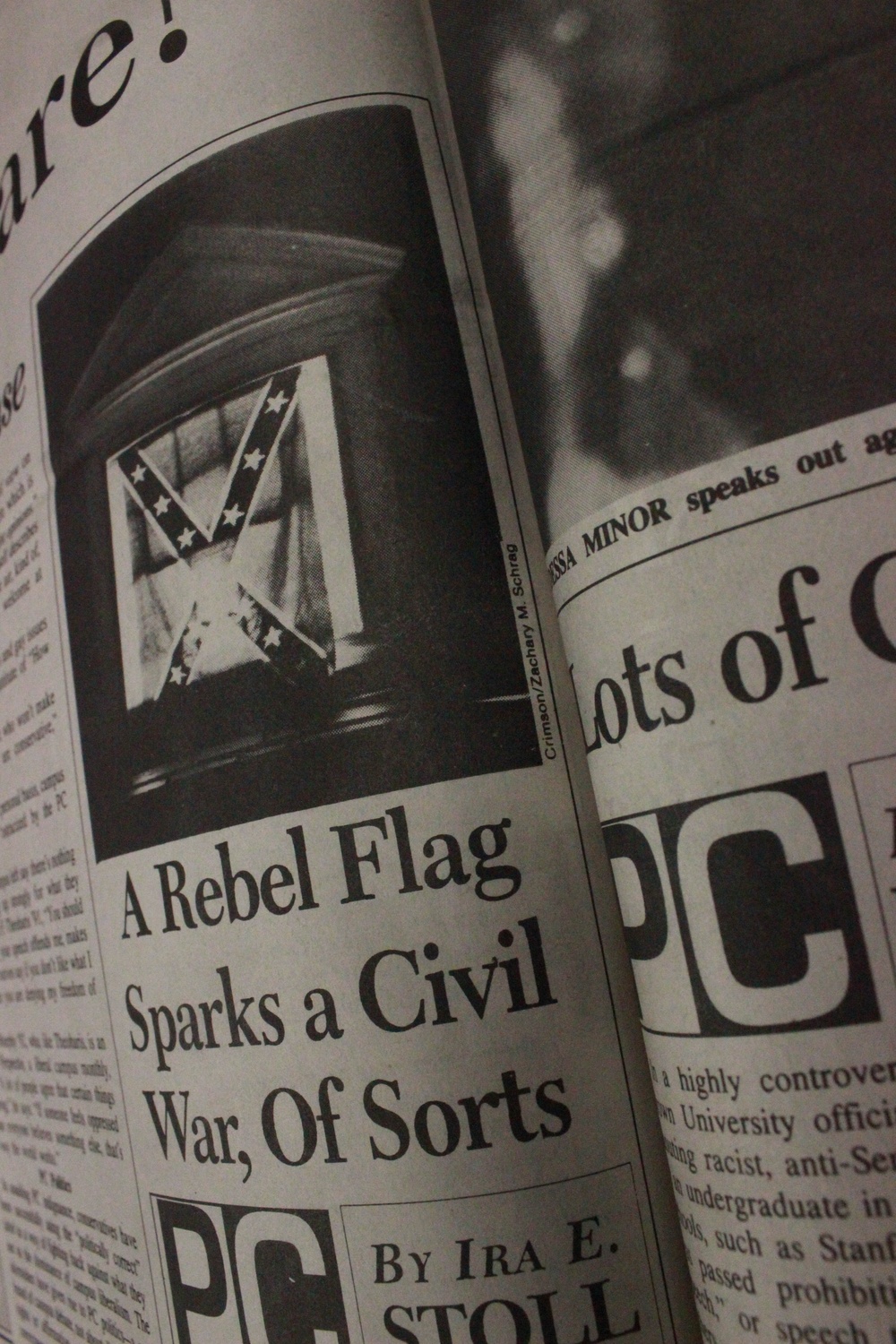 Beginning in the winter of 1990, a series of students publicly hung Confederate flags in their dorms, sparking controversy as students struggled to draw the line between freedom of speech and harassment. By Zachary M. Schrag

While students who were on campus agreed that Harvard administrators did not formally constrain the way students conveyed their beliefs, they added that the general climate of the student body exerted social pressure, determining what could and could not be said.

“At the time when I was [at the College], there seemed to be a lot of talk about freedom of expression,” Jiles said. “But if the expression wasn’t the politically correct expression, then it wasn’t as accepted.”

“I was born in the South. I was born a rebel,” Bridget L. Thomas ’91 said in an interview with The Crimson in 1991. Thomas, whose maiden name is Kerrigan, also hung a Confederate flag in her dorm room.

Unlike Jiles, and a third student who hung a Confederate flag, Thomas refused to remove the flag in the face of criticism. She said at the time that she believed the flag was a symbol of Southern “honor and grace and dignity.”

Students like Thomas, Jiles, and John M. Eggert ’90, the third student, sought to express their beliefs despite their unpopular nature at the College.

In response to Jiles’s decision to hang the flag, then Leverett House Master John E. Dowling ’57 said in an interview with The Crimson from 1990 that he believed offensive displays visible in the public eye should be removed.

“I remember thinking, ‘That makes no sense whatsoever,’” Jiles said.

For the students seeking to express minority viewpoints, these opposing interpretations of their actions stemmed from a misunderstanding on the part of the majority.

“[The Confederate flag] may not be a popular symbol up here because a lot of people misunderstand it,” Thomas said at the time.

According to David A. Plotz ’92, the liberal majority on campus had made political correctness the social justice issue of the time. Beginning college in the wake of the vibrant social movements of the late 1980s, Plotz and his colleagues entered into an activism “vacuum.”

“That was in the first era of discussion about what would now be microaggressions and trigger warnings. We didn’t have those terms. We had politically correct,” Plotz said. “It was about what was okay to say and what was not okay to say.”

At the time, Thomas pointed to the deliberate effort by a “politically correct” majority to invalidate the views of a conservative minority.

Thomas described Jiles’s capitulation and the removal of his Confederate flag as “a victory for small-minded liberalism and...a defeat for free speech.”

In the face of controversy within the student body over the definition of free speech versus harassment, former University President Derek C. Bok assembled a faculty committee to develop a series of “Free Speech Guidelines.”

In the guidelines, adopted by the Faculty of Arts and Sciences in the spring semester of 1990, the committee emphasized the importance of free speech in an academic setting.

“As a community, we take certain risks by assigning such a high priority to free speech. We assume that the long term benefits to our community will outweigh the short term unpleasant effects of sometimes noxious views,” the introduction to the guidelines says. “Because we are a community united by a commitment to rational processes, we do not permit censorship of noxious ideas.”

According to Nye, these guidelines sought to prohibit the obstruction of free speech rather than to discourage speech that community members may consider offensive.

“The outcome [of the committee] was that preventing other people’s speech was clearly a violation and should be disciplined,” said Nye, “but there would not be a limit on content of speech—in other words, no hate speech type of limits.”

In a 1991 op-ed in the Boston Globe, Bok echoed the faculty committee’s commitment to free expression.

“One reason why the power of censorship is so dangerous is that it is extremely difficult to decide when a particular communication is offensive enough to warrant prohibition or to weigh the degree of offensiveness against the potential value of communication,” he wrote. “I suspect that no community will become humane and caring by restricting what its members can say.”

“My sense was that if you were a conservative at Harvard,” Paul S. Pottinger ’90 said, “you probably felt chilled to the bone.”

“Most of the student body was very liberal, socially and politically,” Jim H. Colopy ’90 said. “People who were conservative would be less inclined to speak up because they would have felt uncomfortable and unwelcome.”

Jiles added that, contrary to formal University policy, those dominating the conversation seemed willing to curtail free speech for the sake of eliminating the possibility for offense or harassment—so much so that some students felt no choice but to keep their thoughts to themselves.

“There were a lot of students who had opinions but just did not voice them,” Jiles said.

Eggert’s experience displaying and later removing his Confederate flag exemplifies this disconnect between the faculty-approved “Free Speech Guidelines” and the reality of student life on campus at this time.

“Nobody made me take it down…They weren’t limiting my free speech at all,” Eggert said in an interview last week. “They made it clear to me from the moment I walked into the dean’s office that it was my right.”

Despite the faculty’s acceptance of Eggert’s choices, he said that he felt compelled to monitor the way he expressed himself publicly, to avoid provoking backlash from the overwhelming voice of the majority opinion.

“In terms of gender, sexual orientation, religion, you learned to watch your words a lot more than we had in the past,” Eggert said. “You didn’t want to offend people, even if it was accidental.”

Pottinger agreed that conservatives on campus engaged in this self-censoring to avoid having the campus “jump all over [them].” Pottinger and other liberal students, however, did say that the University should not formally regulate student expression.

Twenty-five years after these controversies over freedom of speech and political correctness embroiled the College, Jiles said he has come to understand the value of checking potentially offensive views.

“There is a lot of room out there on campus and in society for a little more respect for people’s opinions and positions,” Jiles said. “Just because you can stick a flag up on the wall doesn’t mean you should do it.”