Female Athlete of the Year: Amanda Sobhy, a Four-Time Champion 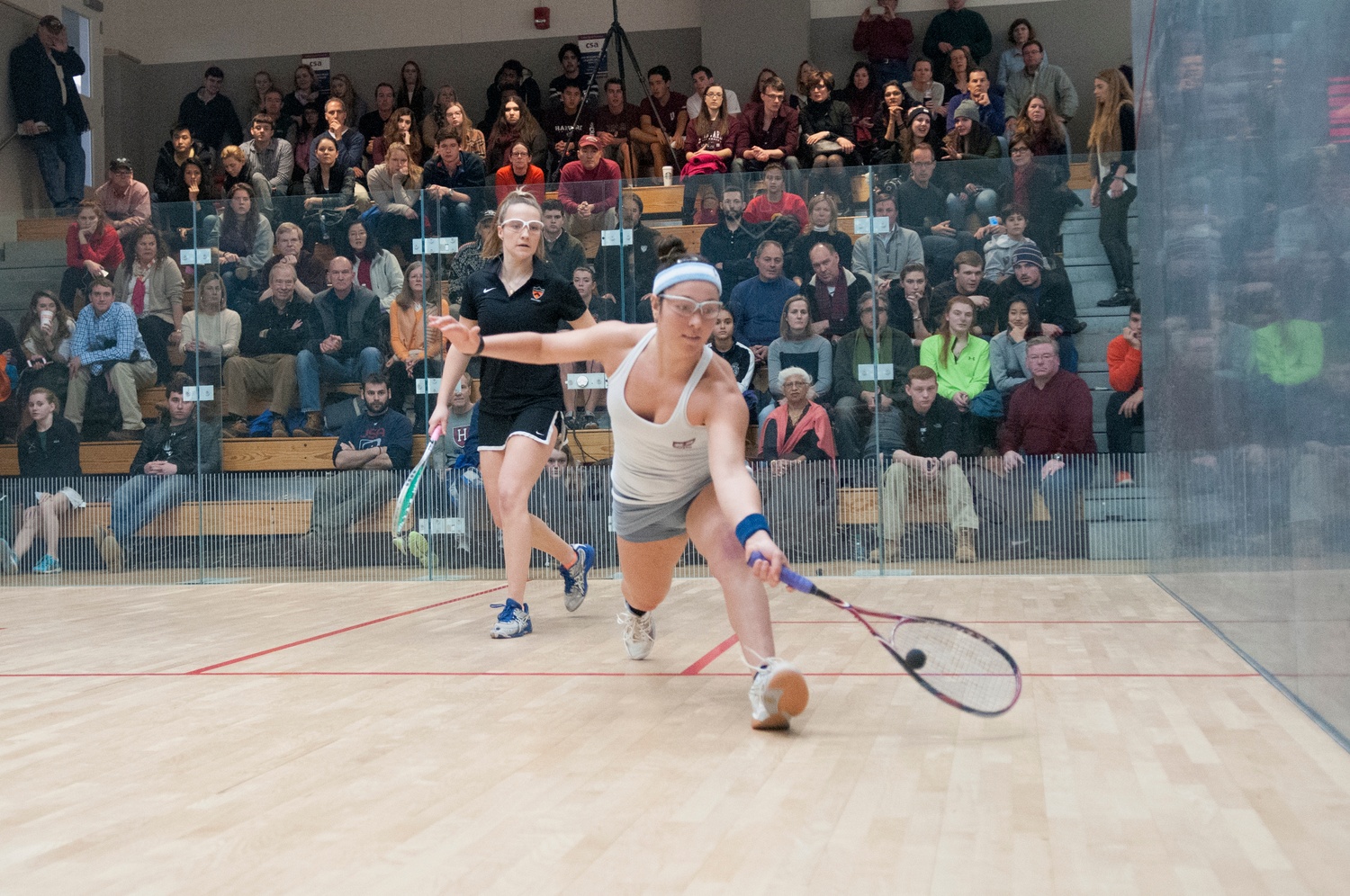 Senior Amanda Sobhy concluded her career with her fourth-straight CSA individual national championships, becoming only the second women's squash player to do so. By Mark Kelsey
By Sam Danello, Crimson Staff Writer

It’s a Sunday in the middle of the spring semester finals period, and Harvard senior Amanda Sobhy is competing at the World Squash Doubles Championships.

Calling in from Chicago, Sobhy says that she is finding time to study but that it is difficult to provide full attention to reading notes when you are just an hour away from an international title in mixed doubles.

At least her teachers have been flexible. The top-ranked women’s player from the United States was scheduled to take an exam the previous Thursday, but her professor decided to grant her some leeway.

Thus, when Sobhy returned from Illinois clutching a second-place finish along with a carry-on bag, she had to face one last opponent: finals.

“When I need to study, I’ll take time to study,” Sobhy said. “Then when I go to training, I’ll put the full effort into training. That way I don’t waste any time.”

If the life of Amanda Sobhy appears to be hectic, that is because it is. For the past four years, Sobhy has shouldered a heavy load of personal responsibilities, from professional tournaments and collegiate competition to a Harvard course load.

But with a packed schedule has come impressive results. Over her four years with the Harvard team, Sobhy has never lost a match. In fact, she has dropped only two games while competing for the Crimson—both to Trinity’s Kanzy El-Defrawy—but she won both of those matches in four games.

During this run, Sobhy has claimed four consecutive Ramsay Cups as the women’s individual national collegiate champion. Only Gail Ramsay, the award’s namesake and current coach of the Princeton women’s team, has also accomplished this feat.

“Amanda’s definitely very competitive,” co-captain Haley Mendez said. “She commits herself to everything she does, especially if it’s a competition, and will go above and beyond to help her team and to win.”

All this collegiate success has paved the way for Sobhy’s post-graduation plans, as she will play squash full-time after Harvard. 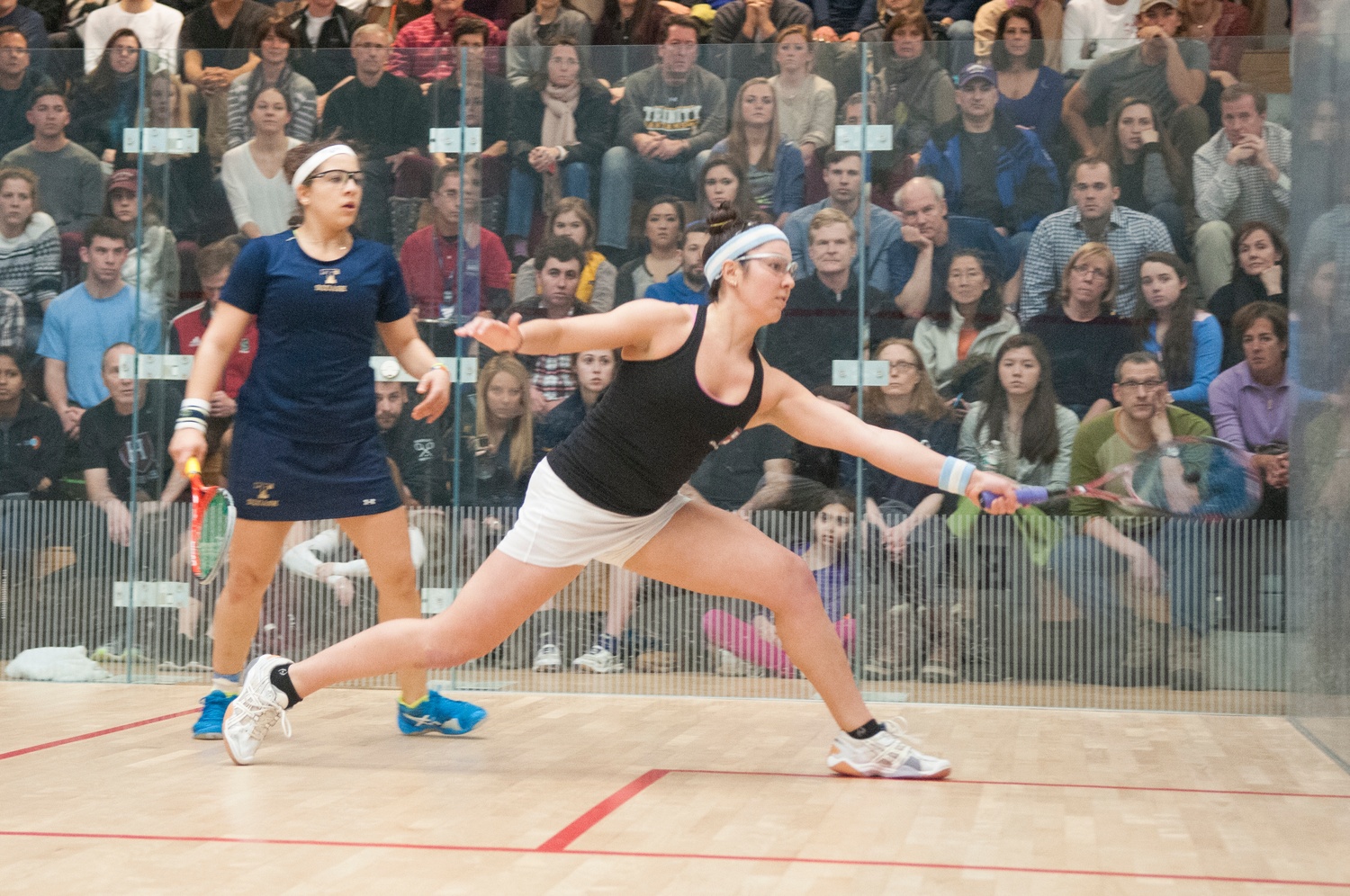 In her time with the Crimson, senior Amanda Sobhy helped lead the Harvard squad to three national titles and two Ancient Eight crowns. By Mark Kelsey

For Sobhy, however, the idea of going pro is more of a formality than a significant milestone. Already ranked No. 10 in the world and No. 1 in the United States, Sobhy has multiple professional tournaments titles to her name, including one at the Women’s Texas Open in April.

But over the years, while Sobhy has continued to rise in the national rankings, one thing has remained the same. At each step of her career, Sobhy’s father Khaled has cheered on his daughter. In fact, he served as Sobhy’s first coach and taught her how to handle a racket.

“We all push each other,” Amanda said. “[Some people] have to travel an hour to go get some matches…. We go from home to the courts, and we’re there playing.”

Amanda developed an interest in the sport after watching her father train with Omar. Early in her career, the opportunity to beat her older brother pushed the middle Sobhy sibling through tough training sessions.

These days, the more significant rivalry within the Sobhy family is the one between Amanda and Sabrina, the latter of whom is currently ranked fourth in the nation. In fact, a recent Boston Globe profile called the duo the “Venus and Serena Williams” of the squash world.

In the finals of the 2014 U.S. Squash Championships, Amanda matched up against Sabrina for the American crown. Youth triumphed over experience, as Sabrina took the match in three games.

It was an internal struggle for Amanda: the uneasy balance between familial pride and personal disappointment. But the elder sister handled the defeat as she handles many setbacks, namely by turning them into motivational anecdotes.

“I’m glad if anyone had to beat me and win the national title, it was my sister,” Amanda said. “But I obviously wasn’t happy to lose. [Sabrina’s] nipping at me from behind, so that motivates me to train harder.”

This past March, Amanda returned to that same tournament and claimed the U.S. national title without dropping a game.

The dominant performance was reminiscent of the ones Sobhy has been putting on since the start of her Harvard career. Sobhy has held the Crimson’s top position since midway through her freshman season, a campaign in which she recorded a perfect 15-0 individual record. In that year, Harvard began the season as the top-ranked team in the nation and finished as the unbeaten national champion.

Following up such an unblemished campaign is no easy task, and Sobhy admits to having battled feelings of pressure throughout her college career. At times, it was no longer enough to win every match—she also had to claim every game. 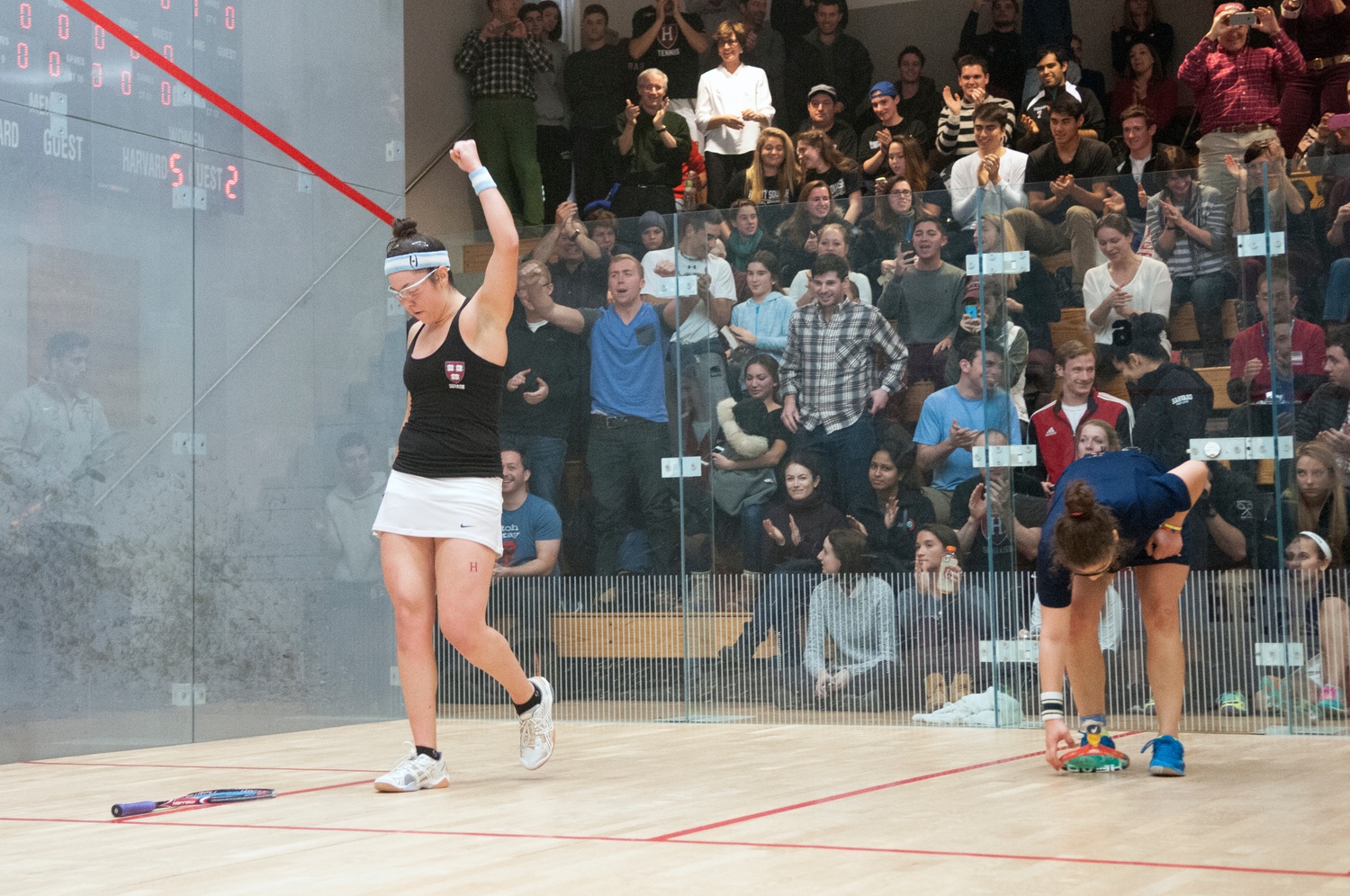 Throughout her career at Harvard, Sobhy went undefeated, dropping a total of two sets in the span of four years. By Mark Kelsey

“I can’t imagine the pressure to be honest,” Mendez said. “Going into every match, the team expects her to win. We go in thinking we’re already up one-love.”

Although Sobhy finally dropped her first game midway through her sophomore year, the small disappointment had no effect on her progress, as she still finished the season, and eventually her collegiate career, with a perfect record.

“There’s a ton of pressure on me to live up to the expectations of everyone,” Sobhy said. “I was just happy the way that I dealt with all that pressure. To actually win the four titles was a little [relieving].”

Sobhy will face greater challenges in her post-collegiate career, which she will base out of Boston. Under a new coach, former No. 1 men’s player Thierry Lincou, Sobhy will train twice a day, six days a week and zip around the world for one or two tournaments each month.

It’s a hectic schedule, but the Sea Cliff, N.Y., native has heard that before.

“I think she can only go up from here once she starts focusing on her professional career full-time,” Mendez said. “But I think her results speak for themselves already. She’s top-10 in the world while going to Harvard. It’s an incredible accomplishment.”