Women's Ice Hockey: An Inside Perspective 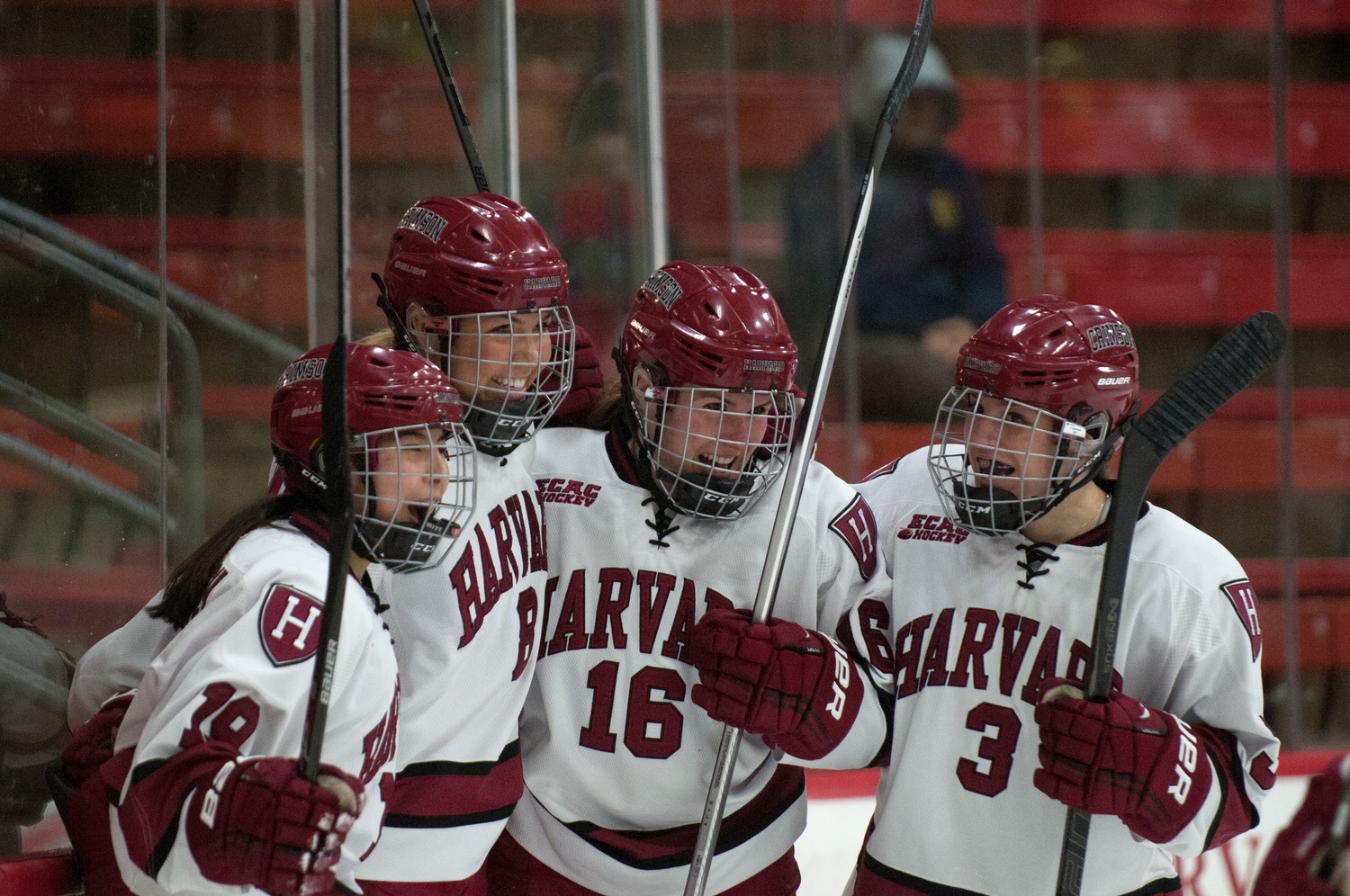 Junior forward Miye D’Oench (far left) celebrates during a 9-2 win over Boston University on Feb. 3 with three members of the Class of 2015—Hilary Crowe, Marissa Gedman, and Sarah Edney (from left to right). By Mark Kelsey
By Laura Bellamy, Contributing Writer

Finding words to describe this past season for the Harvard women’s hockey team is beyond difficult, but listing the team’s accomplishments is a good place to start. Winning the Beanpot on home ice. Check. ECAC Champions. Check. Ivy League Champions. Check. Earning a conference playoff crown, a third straight berth in the NCAA Tournament, an appearance in the national title game? Check, check, check. Never before in the storied history of Crimson women’s hockey has a club achieved all of the above.

As an assistant coach on this year’s staff, I am proud of our entire team. However, I am particularly proud of our class of 2015, all of whom I played alongside for at least two seasons and coached for at least one. They are largely responsible for what was one of the most triumphant winters in program history.

The septet of which I speak so highly includes Kalley Armstrong, Hillary Crowe, Sarah Edney, Lyndsey Fry, Marissa Gedman, Josephine Pucci, and Samantha Reber. Together they own a laundry list of on-ice accolades. They have been Olympians, All-Americans, and Patty Kazmaier nominees—an award bestowed upon the best player in Division I. They boast a combined 19 All-Conference selections. One has been named the league’s best defenseman, another the league’s best defensive forward. Four have served as team captains. As impressive as this list of accomplishments is, it does our seniors little justice. Over the past 12 months—the first time in which they were all in the same class—this group led with poise, selflessness and personality.

These seven are winners in every facet of the word, but their prosperity has not come without adversity. Armstrong spent the 2013-2014 year in her native Toronto, Canada, sidelined by a serious concussion, then captained this year’s team and scored the goal that sent us to the national title game. Crowe broke her wrist in the last regular season game of her career, only to make a miraculous comeback in the national semifinal. Edney was named an All-American this season, less than a year after major hip surgery. Fry eclipsed both 50 goals and 100 points in 2014-2015, despite fighting a hip injury that would require surgery at year’s end. Gedman sat out in 2012-13 with a torn Achilles, then captained the team to the NCAA quarterfinal the next year. Pucci missed 2012-2013 with a head injury, then made the 2014 United States Olympic Team, and returned to Harvard this past fall. Samantha Reber, despite her fair share of health scares, including a three-day hospitalization leading up to her last regular season series, missed just two games in four years and led the class in career games played (134). Even Jessica Perillo, an honorary member of the class, battled through a softball career riddled with injury, ultimately taking on a dual role as manager of both the softball and hockey teams. She brought an aura of positivity and enthusiasm to our team that was simply invaluable.

All of this, and they never sought pity. Instead, they fought on. And in so doing, they led on. Each with her own flair. Army is as natural a leader as you could find. She marches to the beat of her own drum, and it’s the coolest, goofiest drum on the team. HC is the ultimate example of an athlete who prepares. From off-ice training to recovery to nutrition, she leaves nothing to chance. She gets her business done, and doesn’t expect praise along the way. Eddy has what the team endearingly refers to as “sass.” But what they all know is that she would fight an army for any one of them. Lynds is the quirkiest of them all. Her interests outside of hockey are vast and varied, but that doesn’t mean she doesn’t bring her best self to the rink every day. Geddy is a warrior. No one ever goes up against her without expecting a battle. And yet, she balances that intensity with an unrivaled sense of humor. Pucc is as humble as she is athletically inclined. She doesn’t need to be reminded of her own significance, but her finest quality is helping others feel appreciated for theirs. Rebes seemingly is never in a bad mood. She’d do anything for anyone, and that selflessness is perhaps even more clear on the ice, as she leaves Harvard in the top-10 for career assists.

These seven are great hockey players, and even better leaders. In 2014-15, they led as a cohesive unit while staying true to themselves and their own style. This allowed them to reach every member of the team in some way, and create a foundation that never crumbled. They entered Harvard as part of three different classes, but leave today as one. One class whose legacy of selflessness in pursuit of success will stay with the program for years to come.