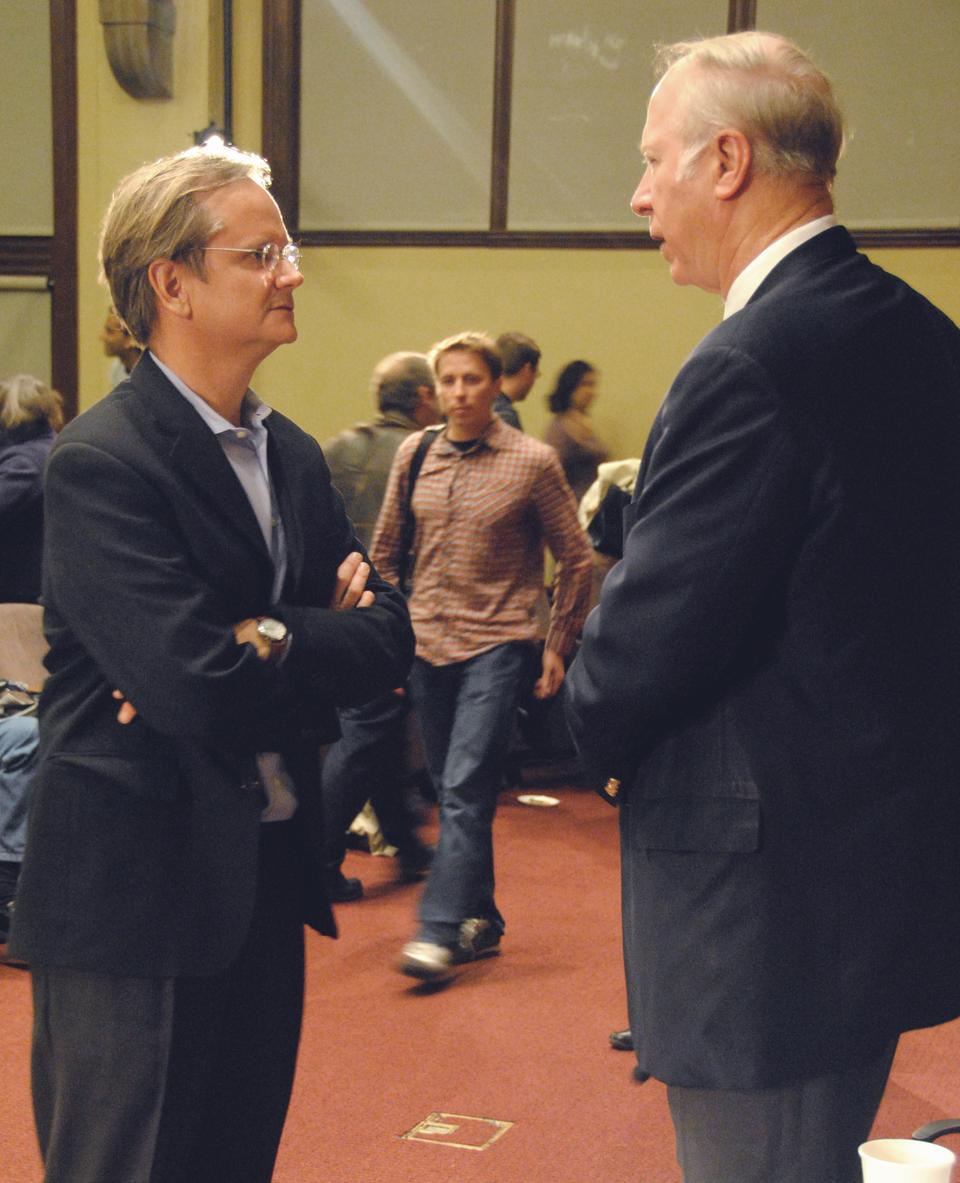 In what is sure to be a rather unconventional candidacy, Lawrence Lessig, a Harvard Law School professor, is considering a bid for the Democratic Party’s nomination in the 2016 presidential election.

Lessig, a constitutional scholar and government reform activist, wants to run as a “referendum candidate” with one primary policy platform: change the way elections are conducted in the United States. If elected president, Lessig said, he would aim to pass a set of election reform packages and, with that accomplished, immediately resign from the nation’s highest elected office and relinquish power to his vice president.

Harvard Law School's Lawrence Lessig, pictured at left in 2011, is mulling a bid for the U.S. presidency. By Robert J Lemos

“My idea is to be president for a day. Obviously, that is more hopeful than the idea of this campaign,” Lessig said on a conference call with reporters Tuesday morning.

If he runs in the Democratic primary, Lessig would face several other candidates, including former secretary of state Hillary Clinton, the overwhelming favorite to win the party’s nomination.

Still, Lessig has not officially entered the race. He maintained Tuesday that he is still “testing the waters” for his candidacy, and he said he will not enter the race unless he raises $1 million by Labor Day. If he reaches that fundraising goal, he said he would take a leave from his job as a professor and “spend every moment of my energy to make this a central issue of the Democratic primary.”

Lessig’s campaign site went online late Monday and has already generated national media buzz. Lessig said he has started hiring staff, and a public relations firm, Fenton, handled press requests during the launch. As of early Thursday morning, Lessig’s campaign website boasted that his exploratory committee had already raised more than $167,000 from a pool of about 2,000 donors.

Lessig has previously made efforts to try and change election rules, albeit with mixed results: In the 2014 midterm elections, he raised money through an independent expenditure-only committee, or Super PAC, called Mayday, that supported candidates who advocated for campaign finance reform (it billed itself as a “Super PAC to end all Super PACs”). He has organized marches in New Hampshire, an early and influential primary state, calling for election reform, a history he sees as a potential advantage in the race.

“At the beginning of the year I had spent more time in New Hampshire than any other candidate except Hillary Clinton, and then I wasn’t even running for president,” Lessig said Tuesday.

Lessig’s reform agenda takes shape in a proposed piece of legislation dubbed the Citizen Equality Act of 2017. According to his campaign website, the law would expand voting rights, end partisan gerrymandering, and create a voucher system for financing campaigns.

While Lessig praised the policy platforms of other Democratic candidates, especially the liberal U.S. Senator of Vermont, Bernie Sanders, Lessig argued that many of their proposals are unrealistic without first passing wide-scale reform. He is confident he will qualify for the first Democratic primary debate, which requires candidates to have at least 1 percent national polling figures to appear on stage.

“There’s enormous support in the public for changing the corruption and the way we allow representation to happen in the American public today,” Lessig said.