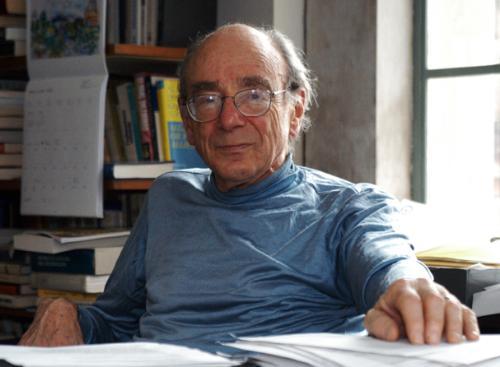 Stanley Hoffmann, an iconic voice in international relations who taught generations of top scholars in his more than half century at Harvard, died in his sleep on Saturday night. He was 86.

“Stanley was above all, in his heart and soul, a teacher—one of the most devoted and influential teachers in Harvard’s modern history," Government professor Michael J. Sandel, a longtime colleague and friend of Hoffmann, wrote in an email.

The founding chair of the Center for European Studies who published 19 books, Hoffmann was known for his interdisciplinary approach to political science and his role in helping to create the Social Studies concentration in 1960.

“He was one of a kind; he will be missed by everyone in the Harvard community who was lucky enough to know him,” History professor James T. Kloppenberg, the current chair of the Committee for Degrees on Social Studies, wrote in an email.

Hoffmann’s academic legacy lives on through the many students and colleagues who were influenced by his work. According to History professor Charles S. Maier ’60, a former Crimson editorial chair, most of the top scholars in European affairs of his generation came through Hoffmann’s CES at some point in their careers.

Hoffmann’s voice still answers the main line of the Center for European Studies, his polished, slightly accented English telling callers that they can dial the extension of the person they are calling if they know it.

At a party to commemorate his retirement in 2013, Suzanne Berger, a professor of political science at MIT, also drew attention to the continuity of his voice.

“Hoffmann’s lectures taught me that the real teacher is the voice one hears for life. When I’m doing my own work today, I still hear the voice of that teacher wondering, challenging, posing the hardest questions. I always will,” she said.

His colleagues remember him for his generosity. Government professor Peter A. Hall recalled that during his days as a graduate student, Hoffmann’s CES served as an “oasis of egalitarianism” in an otherwise stratified Harvard.

Though he taught at Harvard from 1955 until his retirement in 2013, “history had slapped him around quite a bit beforehand,” in the words of one of his many former students, Dartmouth history professor Anne Sa’adah.

Born in Vienna on Nov. 27, 1928, Hoffmann soon moved to France where he lived through the Nazi occupation before collecting a degree from Institut d’Etudes Politiques in 1948 and spending a year as a visiting scholar at Harvard.

“He was equal parts political scientist and humanist,” said Sa’adah, remembering his advice to students hoping understand the revolutions of 1848 to read Gustave Flaubert.

Hoffmann also famously assigned the entirety of Tolstoy’s “War and Peace” for a class on war. According to Maier, who was a teaching fellow for that course, the logic behind such lengthy readings was that while students assigned 200 pages would actually complete 100, those assigned 1000 pages would read 600.

One of Hoffmann’s most persistent vocal idiosyncrasies, according to Sa’adah, was his tendency to connect two different ideas using “on the one hand…, but on the other hand…” His students often joked that were his hands tied behind his back, he would be unable to say anything.

This tendency to see both sides was not limited to his scholarship. In the aftermath of the occupation of University Hall in 1969, according to Maier and reports from the time, Hoffmann disagreed with both the students’ tactics and the administration’s decision to call in the police.