With Viviano Out for the Season, Hosch Named Starting Quarterback

Starting job had been up for grabs, according to Harvard coach Tim Murphy 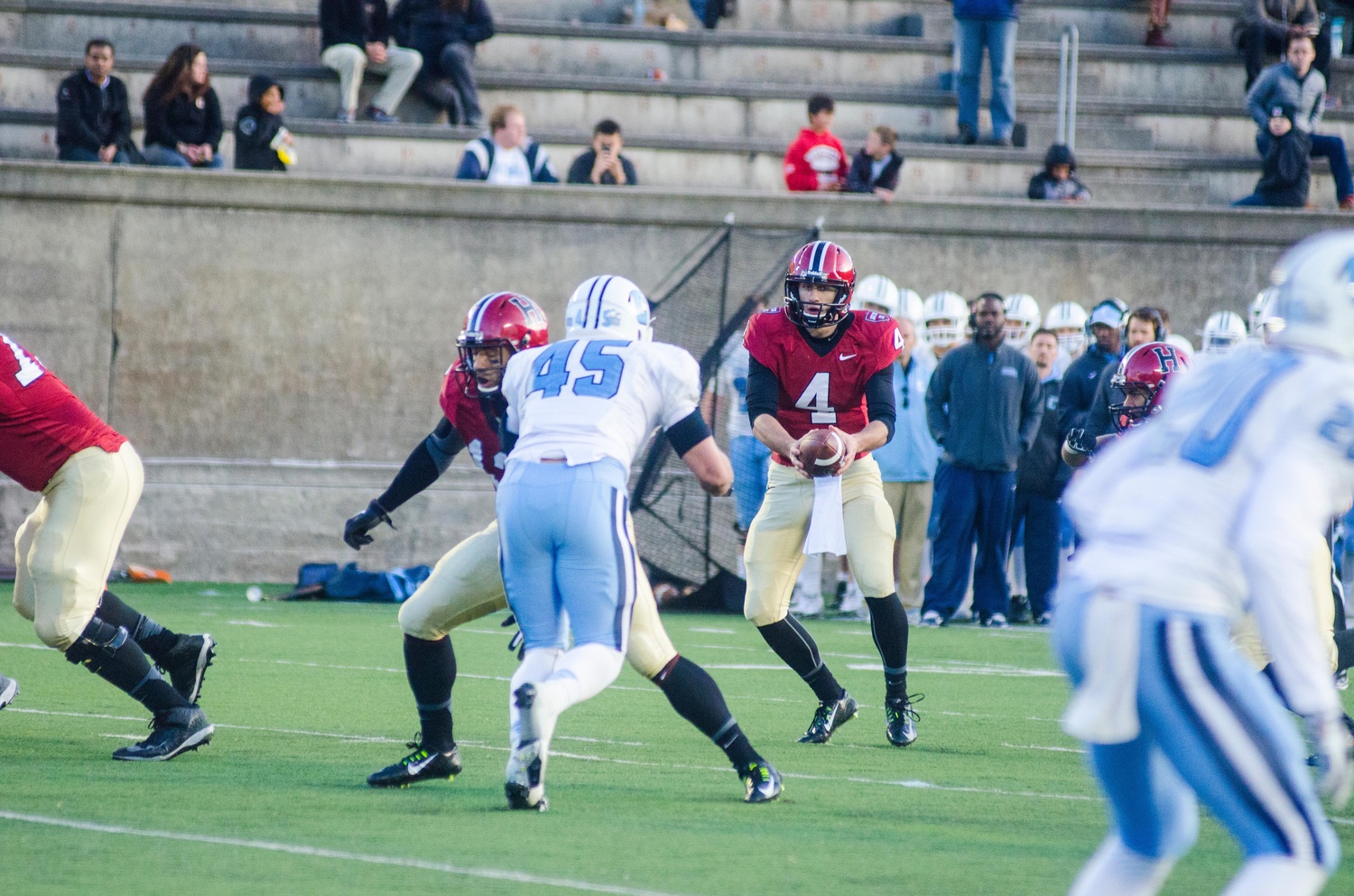 Harvard junior quarterback Joe Viviano, pictured above in Nov. 14, 2014 action against Columbia, will not play the rest of the season, according to Harvard coach Tim Murphy. Viviano played sparingly his first two years with the team but was locked in a battle for the starting job with senior Scott Hosch. By Sarah P Reid
By David Steinbach, Crimson Staff Writer

The Harvard football team did not lose a single game last year, but the team suffered a setback just days before the beginning of its new season. Junior quarterback Joe Viviano, who was in a close competition for the starting job, is out for the season after breaking his foot in a recent scrimmage, according to Crimson coach Tim Murphy.

Viviano suffered the injury to his left foot during a Saturday night scrimmage over the Labor Day weekend. The team later learned that the injury required surgery, and the quarterback is currently wearing a large protective boot that will render him unable to participate in football activities.

According to Murphy, Viviano and senior Scott Hosch were in an “even” competition for the starting position throughout the entire offseason. The injury to Viviano means that Hosch is now the starter and will open the season behind center on Saturday against Rhode Island.

Indeed, Wednesday marked the first day Murphy publicly announced his 2015 starting quarterback. During the team’s spring practices, Viviano took most of the reps with the first team offense in order to give the coaching staff a chance to evaluate him with the best possible personnel. But according to Murphy, the starting job was very much up for grabs entering the preseason.

“It was still a competition, and it was a very close competition,” Murphy said. “Both [Viviano and Hosch] are really improved players and both guys bring their own skillset…. It would not have been an easy decision.”

Viviano served as Harvard’s third-string quarterback last season, behind then-senior Conner Hempel and Hosch. Although Hempel was sidelined with an injury for much of the season, Viviano only appeared behind center at the end of a rout against Columbia. During that game, Viviano threw once for an incompletion but had 63 rushing yards on three attempts, including a 53-yard carry.

The now-starter Hosch enjoys more experience that he will attempt to build on throughout the 2015 campaign. The senior made six starts behind center last season, guiding his team to victory in each of them en route to Harvard’s third undefeated season in the last 14 years.

Surrounding Hosch on offense will be a host of capable skill position players. Senior Paul Stanton was First Team All-Ivy in 2014, and senior receivers Andrew Fischer and Seitu Smith are established, athletic threats on the outside. Murphy has referred to senior tight end Ben Braunecker as a potential All-American candidate, and senior veteran linemen Cole Toner and Anthony Fabiano will anchor the unit up front.

Senior quarterback Jimmy Meyer, who has seen minimal game action over his three years with the Crimson, will serve as Hosch’s backup.

This article has been revise to reflect the following correction:

An earlier version of this article incorrectly stated which foot Joe Viviano injured. In fact, he broke his left foot, not his right one.