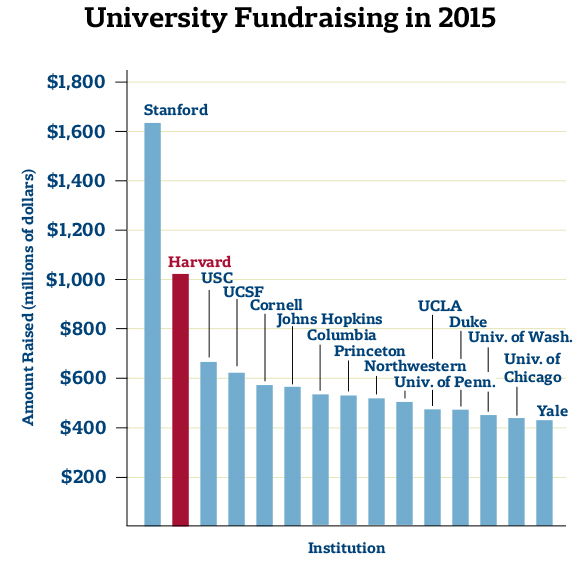 After taking the top spot in 2014, Harvard fell to second in an annual ranking of universities by donations. In Fiscal Year 2015, Harvard received $1.05 billion in gifts, a number that does not include most of John Paulson’s $400 million gift to the School of Engineering and Applied Sciences or Gerald Chan’s gift to the School of Public Health.

Stanford has led this ranking, compiled by the Council for Aid to Education, for nine of the last 10 years. This year, Stanford’s cash receipts totaled $1.63 billion, which includes four gifts of $100 million or more. The largest gifts came in the form of artwork from two branches of a San Francisco Bay Area family, with the two gifts valued at over $600 million.

Many gifts to Harvard—including those from Paulson and Chan as well as a donation to financial aid from Kenneth C. Griffin ’89— have been made as pledges of support to be fulfilled over an agreed number of years. Property gifts, in contrast, are transferred to the University in one fell swoop. The value of property gifts is included in the fiscal year calculations.

Harvard’s continued fundraising comes as part an unprecedented University-wide capital campaign with a target of $6.5 billion. The campaign, which publicly launched in September 2013, has raised over $6 billion as of September 2015. Since then, the University has remained mum on where it stands and Faust has said she has no plans to raise the campaign's target.

The Council for Aid to Education report documented an swell in the value of property, which includes real estate, artwork, books, and other tangible items, donated to universities in FY 2015, increasing 164.9 percent over FY 2014. After the art gift to Stanford, the next largest gift in this category of contributions was the Scheide family’s $300 million gift of rare books and manuscripts to Princeton.

Ann E. Kaplan, the director of the survey, said as the value of art has increased in recent years, an increasing number of private donors have chosen to donate their collections while the value is still high.

“If I had a collection that I did not plan on giving to my children, I would donate to a university now,” she said.

The survey does not register how much a university has raised purely based on pledged contributions. Instead, it records the value of all assets, cash or property, a donor transfers over to a university within the given fiscal year.

Tamara E. Rogers ’74, vice president for alumni affairs and development, wrote in a statement she looks forward to further gifts.

“We remain extremely grateful to our alumni and friends for their continued generosity, which has supported a host of mission-oriented initiatives, including cutting-edge research, new faculty positions and the financial aid necessary to keep Harvard affordable for all students,” Rogers wrote. “As we enter the second half of The Harvard Campaign, we look forward to further advancing our mission of research, education, and discovery, with their support.”