Kerry Washington Honored as Hasty Pudding Woman of the Year

Actress Kerry Washington fused humor and activism on Thursday when she was celebrated as the Hasty Pudding Theatricals’ 2016 Woman of the Year.

Washington, known for her role as political strategist Olivia Pope in ABC’s award-winning drama “Scandal,” participated in her first comedy roast before applauding efforts to promote diversity in the entertainment industry during a press conference.

During the roast, Pudding president Robert T. Fitzpatrick ’16 and vice president David A. Sheynberg ’16 referenced Washington’s endorsement of the #StopHateDumpTrump petition, asking her to literally “dump” presidential candidate Donald Trump by throwing a glass of wine and a pie at a cast member dressed as Trump.

“I’m truly, truly honored to join the esteemed ranks of women who’ve made asses of themselves on this stage,” she said. 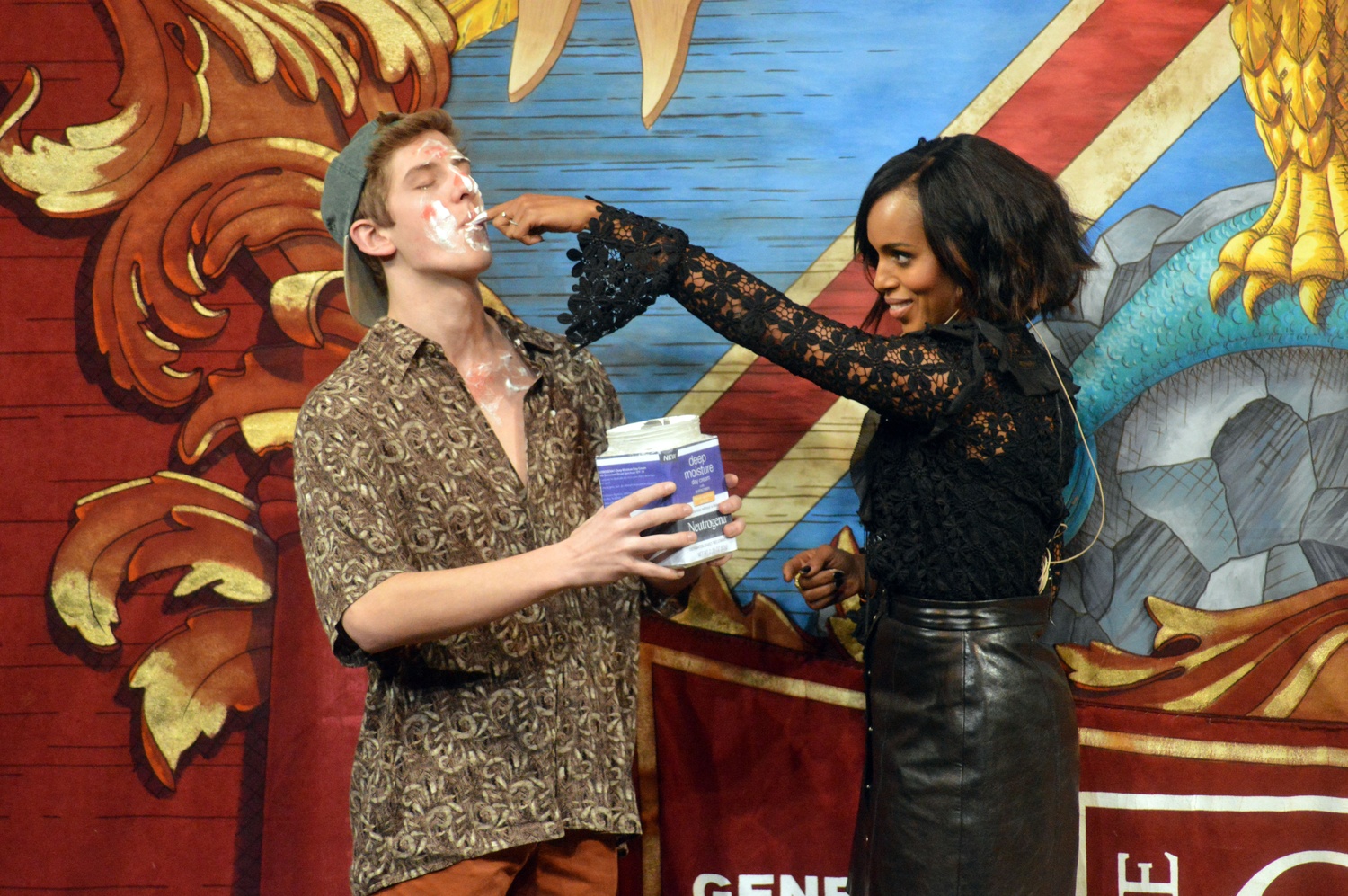 Kerry Washington feeds "Neutrogena" to Darren S. LaPointe '18 at the Hasty Pudding Woman of the Year Roast. Washington was selected for the 2016 award--past winners include Amy Poehler and Marion Cotillard. By Megan M. Ross

Washington also said the Pudding "were way ahead of your time in terms of gender fluidity and playing gender roles.”

The actress finished her roast by inviting the Pudding cast and members of the audience to repeat a pledge.

“When I give up on acting after five years and go run my father’s hedge fund, I will pay women as much as I pay men. I will not claim to understand the lives of people of color because I once met Kerry Washington,” she said.

“I will be open to the idea that somebody in the room might be smarter than me about something. I will always seek to step into someone else’s shoes. I will always remember to make room in the world for diverse points of view.”

“And finally, I pledge to watch the season premiere of “Scandal” on ABC,” Washington concluded. 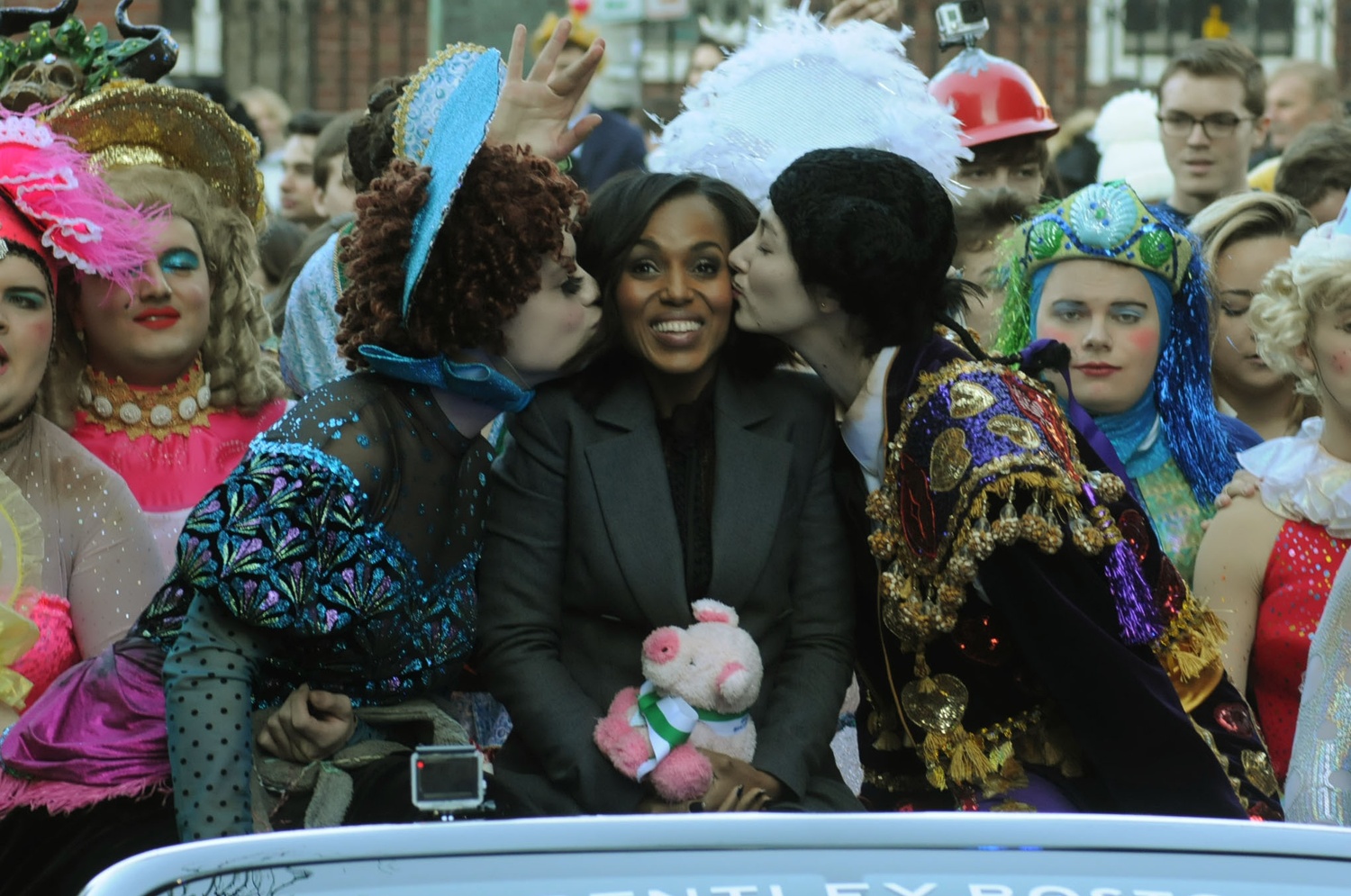 Kerry Washington is paraded down Mass Ave with Hasty Pudding members, as part of the ceremonies for her 2016 Woman of the Year Award. By Megan M. Ross

In the press conference following the roast, Washington commented on racial diversity in Hollywood.

Referencing the boycott of the Academy Awards being organized by several prominent black actors and actresses, Washington said that if she were to have been nominated for an award or asked to attend the event, she does not think she would take part in the boycott.

“I’m really excited that the conversation is happening. It’s a conversation that needs to happen, and I think the Oscars really are a symptom of a larger issue, which is that we need more voices at the table,” Washington added.

“We need for our art to reflect all of us,” she said. “And if more people had the same opportunities and access to making great work, then the Oscars would follow suit.”

Prior to the roast in Farkas Hall, Washington paraded down Massachusetts Avenue in a Bentley convertible.

A crowd massed around the car, chanting and taking selfies as Pudding cast members in drag trailed behind.

Darren S. LaPointe ’18, a member of the Pudding tech crew, was decked out in a bright yellow sun costume.

Some members of the crowd were particularly eager to see Scandal’s protagonist in the flesh.

“If I were to get arrested for one thing, it might be...attacking security,” Sophia Hunt ’19, a “huge fan” of Washington, said.