With Narvekar’s Appointment, Seeds of Change at HMC

When N.P. "Narv" Narvekar arrives at Harvard Management Company, experts say, he will have his work cut out for him.
By Andrew M. Duehren and Daphne C. Thompson 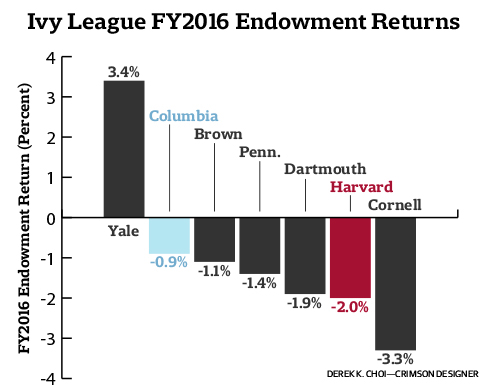 When N.P. “Narv” Narvekar arrives in Boston in December to take the reins of Harvard Management Company—and the $35.7 billion endowment it controls—he won’t be trading the life of a Wall Street banker and New York financier for a low-stress academic job.

Instead, he’ll come to the helm of the largest university endowment in the world during a time of turmoil and repeated underperformance. Harvard’s investment returns have consistently trailed those of its peers in the last few years, drawing the concern of administrators including University President Drew G. Faust. In fiscal year 2016 alone, the endowment’s value plunged almost $2 billion amidst negative investment returns and more than $1.7 billion HMC paid out to fund University operations.

So when Narvekar does arrive in Cambridge, experts say, he’ll have his work cut out for him, and he’ll face a number of questions and tests.

Should Harvard ends its long-standing “hybrid investment model,” in which the University both employs an in-house investment staff and retains outside firms to invest University funds, and transition to an external model like the one in place at the endowment he previously led at Columbia University?

Should it stick with its investments in risky alternative assets, like private equity and real estate, or move towards a safer, more traditional mix of stocks and bonds?

Can he bring stability to HMC as its fourth CEO in 10 years, a rate of executive turnover several experts have said undercuts HMC’s ability to set effective strategy?

And can he make HMC, long the envy of the university endowment world, once again one of the preeminent institutional investors in higher education?

Narvekar’s track record at Columbia could provide clues to his future at HMC. In particular, experts say his hiring could portend the end of the “hybrid model” at HMC and the introduction of an external investment model akin to what Narvekar had in place at Columbia. And it could mark a further shift towards alternative assets in HMC’s investment portfolio.

“It’s an interesting situation in that there are these choices about how much of the legacy of the past to retain, and how much to change or potentially jettison,” said William F. Jarvis, the executive director of the Commonfund Institute, an asset management firm for non-profit institutions.

At Harvard, Narvekar will run an endowment roughly four times the size of Columbia’s—and a team over 10 times as large. The Columbia Investment Management Company’s website lists a lean team of 20 employees. HMC, by contrast, employs more than 200.

That could change, though, if Narvekar decides to have HMC rely more heavily on external managers.

Harvard’s recent investment performance has made some University leaders, including Faust, wonder if it should end its “hybrid model.” It has not kept pace with the growth at many of its peer universities, including Columbia, which returned negative 0.9 percent in fiscal year 2016 to Harvard’s negative 2 percent. Indeed, every year since the financial crisis, Columbia’s endowment has grown at a faster rate than Harvard’s.

Harvard has recently taken strides to cut down its in-house staff, reducing the size of its lagging internal public equity team and moving most of the investments to outside managers last June. Leaving the possibility for future outsourcing open, Faust said in a September interview that internal versus external hiring will be decided “on the basis of where we can do the best investing.”

“It really depends on whether he tries to make the Harvard portfolio look more like Columbia’s, and if he does, then yes, you would probably see fewer people working at the Harvard Management Company,” New York University finance professor David L. Yermack ’85 said.

Narvekar began his career in institutional investing as the head of private equity and hedge fund portfolios at the University of Pennsylvania. His specialty in alternative assets—like private equity, hedge funds, and real estate—has characterized much of his career, experts say, and could begin a shift towards heavier investments in that asset class at HMC.

In fiscal year 2014, the last year for which Columbia released detailed information about its investment portfolio, 21 percent of Columbia’s investments were in private equity, compared to 16 percent of Harvard’s portfolio during the same time period. For some experts, this reliance on illiquid investments like private equity can be risky.

“If he manages the Harvard endowment anything like at Columbia, you’ll see much less investment in the stock and bond market, much more in these illiquid investments,” Yermack said. “So fasten your seatbelts.”

Narvekar’s strong background in private equity, though, could equip HMC to succeed in the asset class. During the financial crisis, Harvard’s extensive illiquid holdings in asset classes like private equity led to a liquidity crisis and spending cuts across the University.

“He seems to be able to pick good outside managers, particularly in the private equity area,” said Charles A. Skorina, who manages a firm that recruits financial executives. “And Harvard’s had a lot of problems in private equity.”

If Narvekar has plans for HMC, for now, he isn’t telling. He declined to comment for this story via a spokesperson at Columbia.

But with his reputation as an even-keeled and fastidious investor, Narvekar won’t make any changes in haste, said Roger B. Kafker, a managing director at private equity firm TA Investments. Kafker attended Haverford College with Narvekar and later worked with him on Haverford’s investment committee.

“Narv is a quiet, thoughtful, very analytical person,” Kafker said. “You wouldn’t expect him to react very dramatically to any good news or any bad news. He would take it in and digest it and then give you a thoughtful response.”

Kafker added that he expects Narvekar, despite his private equity background, to position the portfolio “pretty conservatively.”

And with HMC searching for executive stability after a series of short stints at the helm, Kafker said Narvekar is likely to make a longer-term commitment.

“I think Narv, in making a move as important as this, would view it as a long term investment of his time and resources,” he said. “It’s not something he would do without a lot of thought of spending many years working on Harvard’s endowment.”

And when Harvard’s investment priority is to fund University operations for eternity, Narvekar will have plenty of time.

“For a large complex endowment such at Harvard—at all Ivy League schools, but particularly Harvard— making changes is not something that can be done quickly,” Jarvis said.